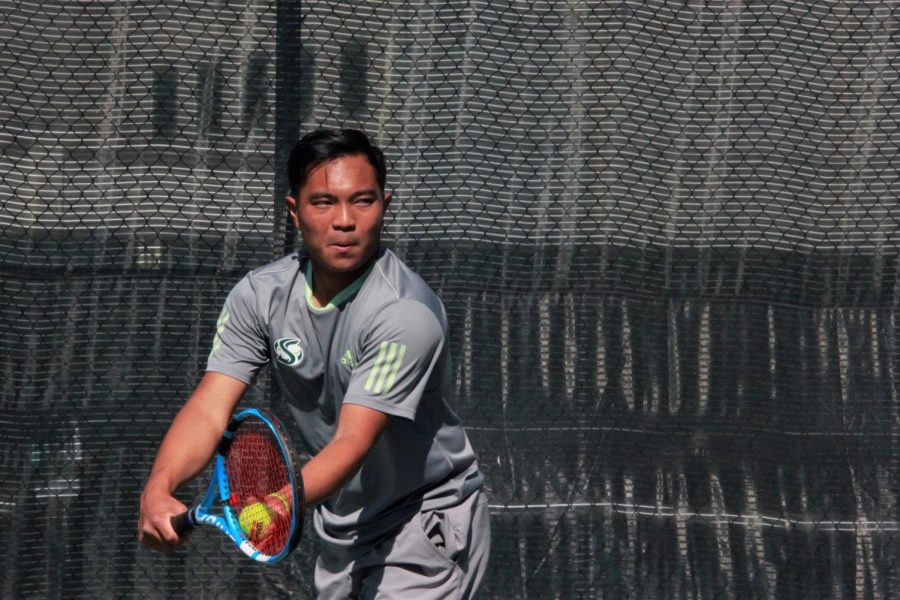 Sac State senior Hermont Legaspi prepares to serve during a doubles match against Washington at Sacramento State Courts on Saturday, Feb. 22. The Hornets lost to Washington 6-1.

The Sacramento State men’s tennis team lost to the University of Washington 6-1 for their fifth straight loss Saturday.

The Hornets (1-6, 1-0 Big Sky Conference) could not end the losing streak against the Huskies (7-4) in the third home match of the season. The team fell down 0-1 early in doubles losing the sets 2-1.

Freshman Carlos Rodriguez and Anton De La Puente earned the only doubles win for the Hornets with a 6-0 victory in set No. 3. De La Puente credited their concentration when leading the set as the reason they were able to win.

“We did a very good job keeping focus because we were up pretty fast and easy the first three games and sometimes it’s tough when you’re up that much to keep concentrating,” De La Puente said.

Legaspi earned the Hornets’ only singles win and match point of the day. He won a close No. 1 match 2-1 (6-4, 4-6, 5-10) with a third-set tiebreaker. Assistant coach Mikus Losbergs praised his performance against a strong opponent.

Sac State senior Hermont Legaspi trying to give the Hornets their first point of the day in singles match no. [email protected] @SH_Sports pic.twitter.com/aGkdRzrtvW

“I think he is playing better, building his confidence and I think he’ll do good in the Big Sky matches,” Losbergs said.

Legaspi said his ability to keep the points close were key against strong serving from his opponent.

“I was able to return, overall, pretty good today especially the first serve which was really important,” Legaspi said.

Even though the team struggled, Legaspi applauded his teammates’ effort and intensity. He doesn’t believe the team needs to make any big adjustments, but instead work on the smaller details.

“Just the little important things, I don’t think it is nothing too major despite what the coaches say or what not,” Legaspi said.

De La Puente recognized Washington as a good Pac-12 team, but said he is focusing on their upcoming Big Sky matches.

“We had some close matches, I think this is going to be very good practice for our two conference matches next week,” De La Puente said.

Coach Kevin Kurtz also believes the match against a strong non-conference team such as Washington was good preparation for their upcoming Big Sky matches. He said it was an amazing opportunity to play high-level teams and a good chance to learn, despite the losses.

“Even though it’s tough to have some losses early, it definitely gets us ready for conference,” Kurtz said.

Sac State’s next game is on the road against Idaho State on Friday at 2 p.m.