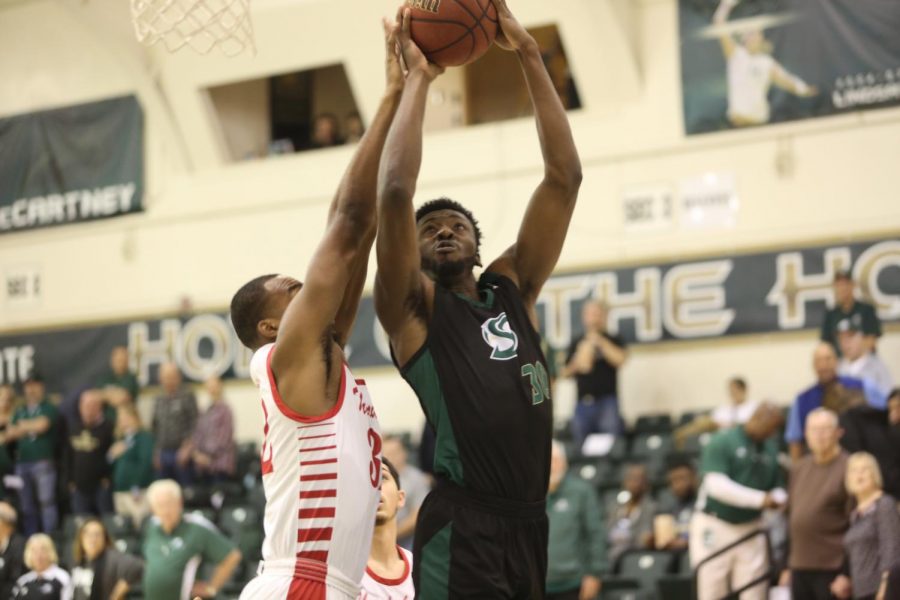 The Hornets (13-10, 6-8 Big Sky Conference) played the first of two home games. They are currently ninth in the Big Sky with seven games remaining until the conference tournament. This will be the first of a four game road trip for the Thunderbirds (14-10, 7-6) and they came into this one with an impressive 3-1 road record in conference play.

A bucket from senior forward Osi Nwachukwu and a 3-pointer from sophomore guard Brandon Davis got the Hornets offense moving and put them up 8-5 after four minutes of play. Nwachukwu also got a big block early that brought defensive energy.

Senior guard Izayah Mauriohooho-Le’afa was hot in the first half, knocking down three straight from behind the line for the Hornets and putting them up 19-10 with 11:23 left to play. The Hornets defense held the Thunderbirds to 4-11 shooting from the field.

“I feel like we got our mojo back,”  coach Brian Katz said. Katz said that the team’s energy had been steadily improving since their loss to Weber State.

At the halftime buzzer, the Hornets were up 37-25. Mauriohooho-Le’afa led all scorers with 15 points, shooting 5-7 from the 3-point line. He also added five rebounds and three assists.

The Hornets came out in the second half and tried to slow things down through post play with senior center Joshua Patton. Davis continued to relentlessly find his way in the paint for scores.

The Thunderbirds came out in the second half struggling to get things rolling, especially when a technical foul was assessed to their head coach. The Thunderbirds went on a run to cut the Hornets’ lead to single digits at 47-39.

The Hornets went on a drought offensively down the stretch, being held without a field goal for about seven minutes.

Nwachukwu and Patton both went out with their fifth fouls, putting the pressure on junior forward Bryce Fowler and Mauriohooho-Le’afa to close out the game in the last five minutes. A three from senior Chibueze Jacobs would be the dagger that secured the Hornet’s lead with two minutes remaining.

“We just knew we needed to change something,”  Mauriohooho-Le’afa said. “This is it we might as well give it our all and play every game like it’s our last.”

The Hornets play again at home Saturday against the University of Northern Colorado at 7:05 p.m.