Hornets come up short against the Vandals 67-53 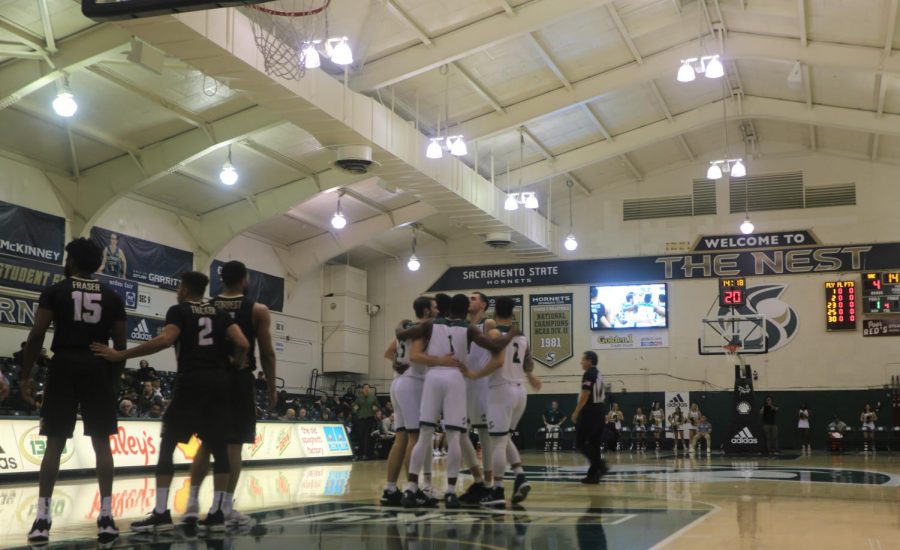 The Sac State men's basketball team huddles during the game against Idaho on Monday, Feb. 4 at the Nest. The Hornets fell 67-53 to the Vandals.

The Sacramento State men’s basketball team fell to Idaho in the Nest on Monday evening 67-53 to give them their third straight loss.

This loss gives the Hornets back-to-back home losses after starting the season off 8-0 on home court.

The Hornets (11-9, 4-7 Big Sky Conference) came into the game looking to bounce back after a loss in a close battle against the conference leader Eastern Washington. Idaho (6-15, 2-8) came in desperate with their last win coming on Jan. 2.

The Vandals quickly got their offense rolling, especially their lone senior, Trevon Allen, who had nine points in the first five and a half minutes of play. Allen entered the game second in the conference in scoring at 19.9 PPG.

Double and triple teams against Hornets’ senior center Joshua Patton held him to four shot attempts, therefore a key part of offense in this one came from perimeter scoring. Junior forward Bryce Fowler made the most of his opportunities, knocking down a three and hitting a jump shot to help himself on his way to seven points in the first half.

Allen already matched his average on the season with 19 points and a 16 point lead with a score of 39-23 going into halftime.

In the second half coach Brian Katz leaned on his bench in order to switch it up on the Vandals. Freshman guard Elijah McCullough and junior guard William FitzPatrick played big minutes off the bench and were even assigned with the task of guarding Allen.

Idaho looked like a team that was hungry for a win having lost their last six.

“It was clearly our worst game of the year in terms of effort,” Katz said on the first half.

Head Coach Brian Katz after the loss to Idaho pic.twitter.com/C6SvQPWfv0

The Hornets made one final push down the stretch. Down by 19, their largest deficit of the game, the Hornets tightened up on defense, helping launch a 15-4 run that put them within eight with 3:11 left in the game.

In the second half, the Hornets’ defense held Allen to only one field goal. However, the Vandals overcame the late pressure from the Hornets and snapped their six game losing streak 67-53.

“Lately we haven’t been coming out ready to play and that’s been showing,” Fowler said. “We’re not defending like we were in the first half of the season so we just gotta get back to that and that starts at practice.”

Junior Forward Bryce Fowler after the game vs. Idaho pic.twitter.com/krMMAAyYen

The Hornets will be looking to get back in the win column when they head to Utah to take on Weber State on Thursday night at 6:00 p.m. in the Dee Events Center.