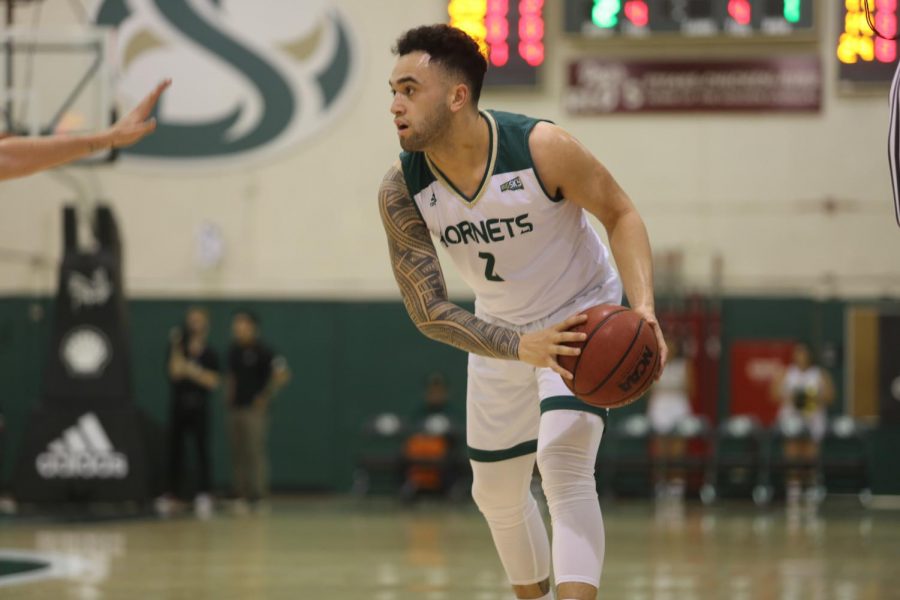 The Sacramento State men’s basketball team lost a close battle against Eastern Washington University 59-54 in the Nest on Saturday evening to drop their first game at home this season.

The Hornets (11-8, 4-6 Big Sky Conference) entered the contest a perfect 8-0 at home having beaten their opponents by a 12.7 point average. The Eagles (14-6, 7-2 Big Sky) came in on a four-game winning streak and is ranked second in offense in Div.I averaging 83.4 points per game.

From the tip off both teams were clicking defensively, especially the Hornets who held the Eagles to 30% from the field through the first ten minutes of action. The Eagles offense is capable of getting hot around the perimeter, all of their field goals at this point having come from three’s to have them up 13-11.

“They’re number one. They are good in transition so that was one of our keys was to slow them down in transition and hold them to limited points,” senior guard Izayah Mauriohoo-Le’afa said.

The Hornets began to get their offense rolling as Mauriohoo-Le’afa knocked down back-to-back 3-pointers to give them momentum and tie the game at 19. The Hornets headed into halftime with a 28-27 lead.

To begin the second half, the Hornets came out aggressively, especially on the defensive side where the Eagles were just 3-12 from the field with 11:54 left to play. Senior center Joshua Patton and junior forward Ethan Esposito both made their presence felt in the paint with six points a piece and had the Hornets up 42-34, their largest lead of the game.

Just as the Hornets were on their way to their ninth straight home victory, the Eagles got red hot, nailing two 3-pointers and a couple jump shots to take back the lead. From this point on, the Eagles did not look back as they took home the victory.

“In the second half they came out and started burning us,” Patton said. “We weren’t communicating on defense, guys were open so those threes changed the game.”

Even though the Hornets lost the game, their defense held the Eagles to a season low 32-point second half. Patton lead the Hornets with 11 points and also added five rebounds.

The Hornets get another home game Monday night against the University of Idaho who is 1-8 in Big Sky Conference games. Tip-off in the Nest is scheduled for 7:05 p.m.