Hornets come within one point of completing comeback 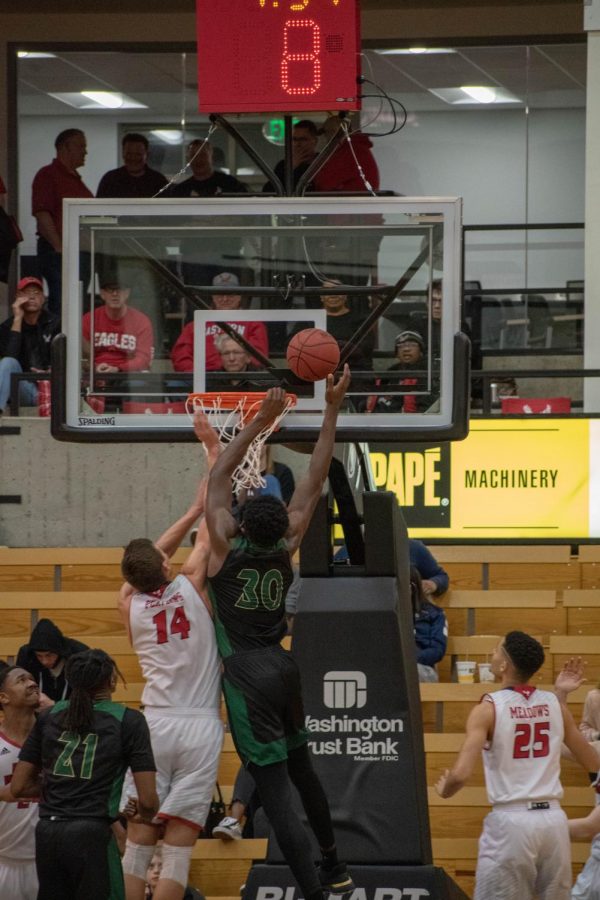 Sac State senior center Joshua Patton goes up for the slam against Eastern Washington on Thursday, Feb. 20 at Reese Court. The Hornets fell to the Eagles 77-76.

The Sacramento State men’s basketball team fell just short despite a strong second half against Eastern Washington on the road Thursday night, losing 77-76.

The Hornets (13-12, 6-10 Big Sky Conference) came off a loss at home against Northern Colorado. The Eagles  (18-8, 11-4) gave the Hornets their first home loss in their last match and are currently tied for second place in the conference.

The Eagles had the hot hand early, especially senior forward Mason Peatling who put up 12 points in the first 10 minutes of play and helped put  the Eagles up 17-11.

For the Hornets, senior forward Osi Nwachukwu got things going early offensively with seven points. Senior guard Izayah Mauriohooho-Le’afa was a bright spot in the offense with seven points in the first half shooting (3-3)FG.

The Hornets went into the halftime down 39-26 and shooting 33% from the field.

To start the second half, the Hornets went down 42-28 before they went  on a run. Mauriohooho-Le’afa continued to find his range, hitting back-to-back 3-pointers to bring the Hornets within single digits.

Junior forward Ethan Esposito and sophomore guard Brandon Jacobs would both hit  threes during Sac State’s 29-14 run early in the second half. A lay up by junior forward Bryce Fowler gave the Hornets their first lead of the game at 57-56.

This run ignited senior center Joshua Patton, who scored three consecutive times for the Hornets including a smooth jumper from the elbow to give Sac State a 64-58 lead.

However, the Eagles  responded with three pointers from their sophomore forward Kim Aiken Jr, who ended with 16 points shooting 4-7 from deep. Peatling got hot again as well, ending the contest with 28 points, 10 rebounds and six assists.

The Eagles found a way to regain the lead in the last two minutes of the game and hold onto it to come out with the victory 77-76. The Hornets outscored the Eagles in the second half 50-38 and while shooting an impressive 66% from the field.

The Hornets continue their road trip Saturday afternoon as they are set to take on Idaho in the Cowan Spectrum at 2 p.m.