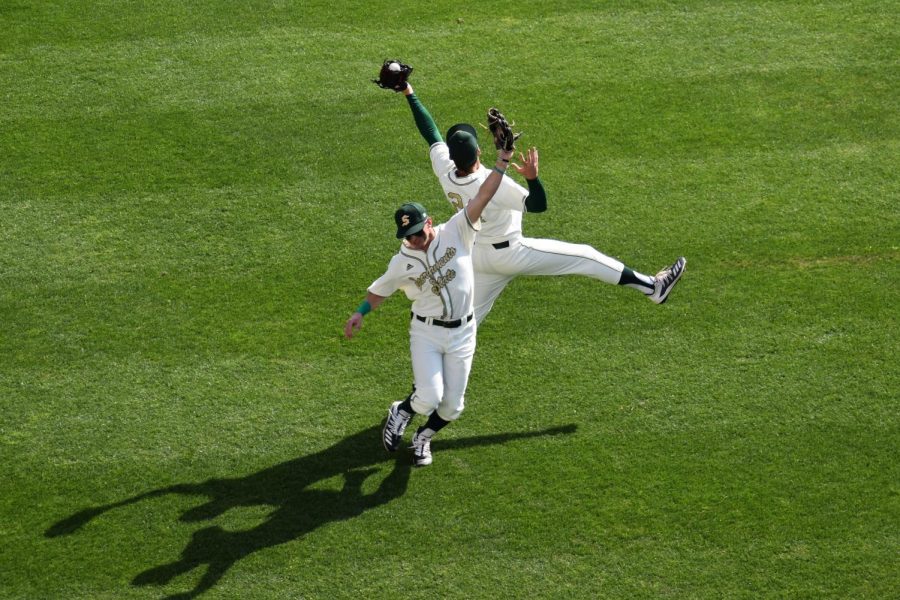 The Sacramento State baseball team bounced back from an opening weekend series loss with a four-game sweep of the University of Wisconsin, Milwaukee at John Smith Field.

The Hornets (5-2) defeated the Panthers (1-7) in convincing fashion over the weekend, outscoring Milwaukee 24-6 from Thursday to Sunday.

Senior pitcher Parker Brahms cemented himself in the school record books Friday night as he broke the program strikeout record and now sits alone at the top with 280 total.

Milwaukee drew first blood Thursday as the Panthers scored one run in the first inning. However, the Hornets responded with three runs of their own in the second and two in the third to take a 5-1 lead.

Each time Milwaukee would score, Sac State would match it. The Panthers added a run in the fourth, the Hornets scored twice in the bottom half of the inning. Milwaukee scored again in the fifth and Sac State countered with another run. The Hornets would eventually add an insurance run in the bottom of the seventh to seal the 9-3 victory to snap a two-game losing streak.

Friday’s matchup was a pitchers duel as both teams sent their top arms to the mound. Senior Parker Brahms (2-0) was dominant once again for the Hornets, earning his second win of the season. The right-hander pitched six scoreless innings allowing five hits with ten strikeouts.

Brahms needed seven strikeouts going into the game to tie the record set by Erik Bennett. He tied the record in the top of the fifth inning and later added three more to sit alone at the top with 280 strikeouts in his career.

“It’s been a roller coaster,” Brahms said. “My freshman year, I had a pretty bad fall. I didn’t think I was going to be here (for) four years. Just talking to Reggie (Christiansen), talking to our old pitching coach Jake Angier just really helped me through the years and it means a lot getting that strikeout record.”

Senior outfielder Matt Smith opened the scoring for Sac State on Friday with his first home run of the season, a solo shot to left field in the fourth inning. The Hornets added one run in the fourth and two in the seventh to secure the 4-0 victory. Junior lefty Brady Rodriguez earned his first save of the season with three scoreless innings of relief, allowing one hit with three strikeouts.

The Hornets dominated the Panthers on Saturday afternoon.

Milwaukee scored their only run of the game in the top of the seventh. Sophomore infielder Martin Vincelli-Simard matched the Panthers with his first home run of the season, a solo jack to left field in the bottom half of the inning. The Hornets added two more runs in the eighth inning to ultimately win 8-1.

Sunday’s series finale was much different than the first three games. Milwaukee scored first with an RBI double in the top of the first and maintained the lead as junior Nick Winter (0-2) was rolling early. The left-handed pitcher did not allow a hit to the Hornets through the first four innings.

In the bottom of the fifth with one out, freshman infielder Jorge Bojorquez connected on a 1-2 pitch and blasted it to parking structure one in left field for the first home run of his collegiate career to tie the game at one. Junior infielder Mitchell Buban countered with his own solo home run to left field as the Panthers retook the lead in the sixth.

The Hornets scored two runs in the bottom of the seventh inning to take the lead 3-2. Sac State’s first two batters singled up the middle to bring the tying run in scoring position without an out. However, the next two batters, struck out swinging.

Sac State coach Reggie Christiansen’s decade of experience showed as he made several key substitutions late with the game on the line that helped his team prevail in the series finale.

Torres was brought in to pinch hit the next at bat and took four straight balls to earn a walk and load the bases. Junior infielder Nick Iwasa followed Torres with a four-pitch, pinch-hit walk, this time scoring the tying run. Junior outfielder Chris Gonzalez was hit by a pitch in the next at bat to score the go-ahead run.

The Hornets score twice in the bottom of the seventh inning to take the lead. Sac State scores on a walk and a HBP in consecutive at bats with the bases loaded.

“We pitched really, really well obviously and I think we’ve made some progress offensively,” Christiansen said. “Today was a really good team win, I think 20 guys got in the game. So there’s a lot of guys that contributed and (we’re) certainly fortunate to win today.”

Sophomore right-hander Travis Adams started the game and pitched four innings for the Hornets, allowing four hits, one run and one walk with three strikeouts. Junior Stone Churby (1-0) pitched the final three innings, earning the win. The right-handed pitcher was nearly lights out with six strikeouts and one hit allowed.

“It’s good to get back on track,” Smith said. “It’s hard to sweep a team in any aspect, let alone a four-game series. I thought our team did a great job coming out, competing for four games.”

Sac State begins another four-game series at The John on Thursday night against Santa Clara University at 5 p.m.