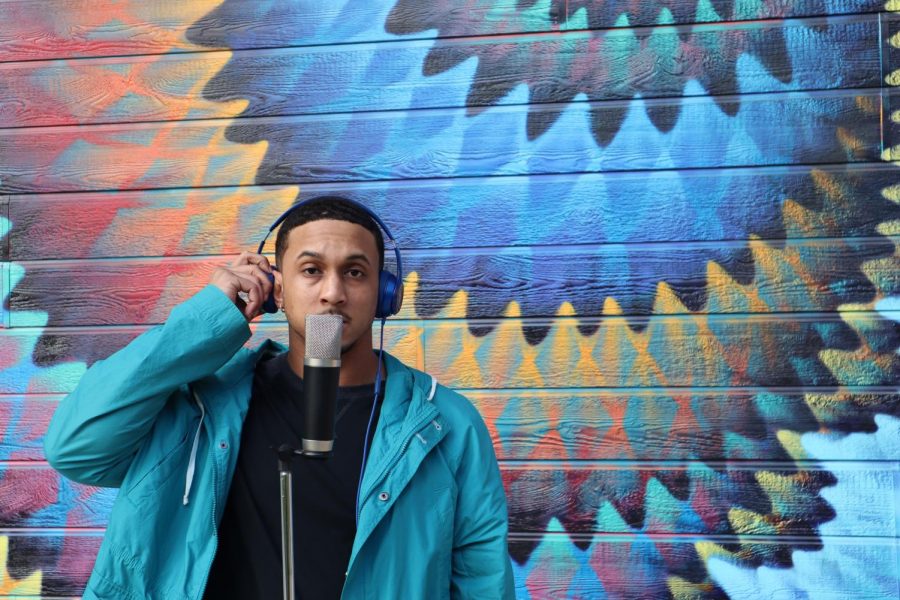 Anthony Shorter, who goes by Gr8tness, poses on Wednesday, Jan. 29, at Sac State. Shorter is from Richmond, CA and in high school performed a rap song for his graduation and prom.

Imagine creating music for 14 years and, after a seesaw of a college career, you’re able to fully focus on the pursuit of your dream.

Anthony Shorter, who goes by Gr8tness, has released eight EPs and multiple singles, as well as multiple music videos since he started making music in high school.

In December, Shorter graduated with a degree in journalism from Sacramento State. Shorter is a former State Hornet staff member.

The Richmond native creates music in both genres of R&B and rap. His stage name ties two of his passions together: music and sports.

“I had always (written) greatness on my shoes when I was playing basketball, you know, how you write goals on a piece of paper or a wall,” Shorter said. “I thought if I make this my artist name, I would see it all the time as a constant reminder to achieve greatness.”

Shorter added the eight to his name to symbolize his jersey number from when he played football from 9 to 19.

Shorter said he number eight also resembles an infinity sign when flipped on its’ side and he wants to be great forever.

He began his music career when he learned how to play the saxophone and wrote his first song in middle school after he was given a poetry assignment in class; the assignment “sparked something,” Shorter said.

He later turned the assignment into a rap and recorded his first song freshman year of high school with his friend.

“We ended up with a whole tape, like eight to 10 songs in freshman year.”

In high school, Shorter learned all the ins-and-outs of creating music. With his headphones and laptop, Shorter created his music, recorded songs, directed music videos and designed his own cover art. He later received the opportunity to perform one of his songs at his graduation and again at prom.

Before arriving at Sac State, Shorter attended four different colleges. He had been injured, which ended his sports career, but he continued to pursue music despite a lack of support from those around him.

“Music saved my life because after I had got hurt in sports, I was in a depressed state,” Shorter said. “Music helped me out of that because if you’re not comfortable talking to somebody, music becomes a therapy session when you write it down. I realized that the content I put in my music may help somebody else who listens to it.”

Mark Deluca, Shorter’s friend of 14 years, said that Shorter’s music is a peek into his emotion.

“He’s always had a different sound than your typical Bay Area sound; there are emotions behind it,” Deluca said. “If you were to talk to him in person, he’s kind of a hard egg to crack. But in his music, he gets to the deep emotional stories, thoughts and background he has.”

Shorter said he gets inspiration from anyone he sees achieving success.

“It never makes me jealous,” Shorter said. “I’m always happy for other people because it makes me want to step my shit up and be up there with them.”

Shorter said that he freestyles most of his music and tends to follow whatever emotions are moving him.

“I can’t make the song unless I’ve either experienced it or seen it or know somebody that’s been through it or else I feel like in my head that I’m lying and I don’t wanna make no fake music just to get famous,” Shorter said. “I want to create stuff I know to be real.”

“Developing his entrepreneurial spirit, his flows, his delivery, his stage presence, it’s all gotten stronger and definitely matured over time,” James said. “I remember when we were younger, between eight or nine, he wanted a DJ set and all, so young.”

Now that Shorter has received his degree, he wants to focus on his music career. Shorter said that he went to college to make his parents and himself proud. He decided to finish school while he juggled his music career because giving up wasn’t an option.

Most recently, Shorter organized concerts for himself and other artists primarily in Sacramento and the Bay Area. His song “Bust a Move” was in the movie “Thanksgiving with the Carters.”

For the future, Shorter intends to focus on his music career but also added that he is working on writing his own TV show.  He said that fame is not as important to him as ensuring that he has a wide reach.

“I don’t care about being famous personally,” Shorter said. “I just want my music to be everywhere. I don’t care if people know what I look like, but as long as I have reached the masses because I want to be impactful.”