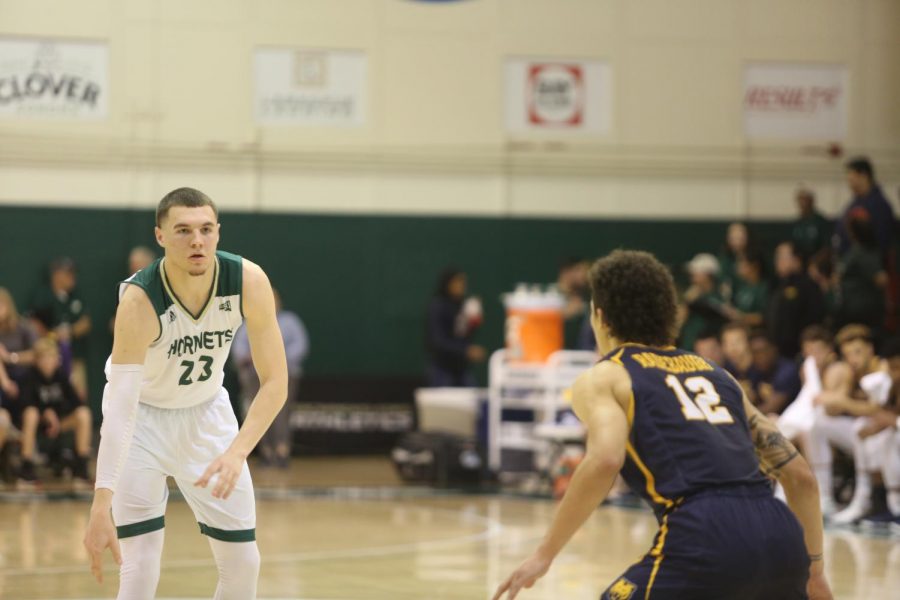 Sac State junior guard Bryce Fowler looks for a teammate in the post against Northern Colorado at the Nest on Saturday, Feb. 15. The Hornets lost to the Bears 68-65.

The Sacramento State men’s basketball team fell short in a close battle with the University of Northern Colorado on Saturday night at the Nest.

The Hornets (13-11, 6-9 Big Sky Conference) came into this game fresh off their impressive win against Southern Utah University. The Bears (17-8, 10-4) came into the contest after a 30-point road win at Northern Arizona University on Thursday, and are currently tied for second place in the conference standings with the University of Montana.

The game started with a battle in the post between senior center Joshua Patton and Bears’ sophomore forward Kur Jockuch. The Bears were the aggressor early, coming out a perfect seven for seven shooting, finding easy layups inside and going up 15-6 after the first five minutes of play.

Junior forward Bryce Fowler made his presence felt early down low with five points and a free throw to bring the Hornets within two 15-13. A bucket plus the foul gave the Hornets the lead 20-19.

The Hornets had good movement offensively, getting sophomore guard Brandon Davis involved, who had seven points. On defense, the Hornets continued to put their efforts on keeping the Bears out of the paint.

“They average 27 threes a game” said coach Brian Katz. “Can’t take away everything [so] we decided that we were gonna take away their threes.”

Sophomore forward Jordan Cooke-Harper missed the shot at the buzzer to end the first half and the Hornets went into halftime down by six. Fowler led the way for the Hornets with 10 points and two assists.

The Hornets had good control of the ball only committing four turnovers in the half but the Bears entered the break shooting a staggering 76% from the field.

Both the Hornets and the Bears came out hot on offense shooting a combined six for six from the field in the first two minutes of the second half. Free throws from junior forward Ethan Esposito cut the Hornets’ deficit to two at 46-44.

A shot inside from senior forward Chibueze Jacobs tied the game at 48 with 11 minutes left to play. The lead continued to shift back and forth down the stretch as it seemed both teams could not miss.

For the Bears, it was their senior guards Trent Harris with 14 points and Jonah Radebaugh with 16 points who carried the load offensively halfway through the second half.

Patton got things going, being a pest inside and came up with a big steal on the Bear’s inbound in the last two minutes of the game that led to a foul for the Bears.

“When it’s a close game and were losing by five at that point with a minute and 20 second left you just got to change it up and that’s what we did,” Patton said. “I made the two free throws, we got the ball back, Izayah had a great look. It didn’t fall in but that’s just what happens sometimes.”

The Hornets got an opportunity to send the game to overtime but the shot by Jacobs was released after the buzzer sounded. The Hornets fell to the Bears 68-65.

The Hornets look to carry their offense on the road where they will face off against first place Eastern Washington University on Thursday at 6:05 p.m.