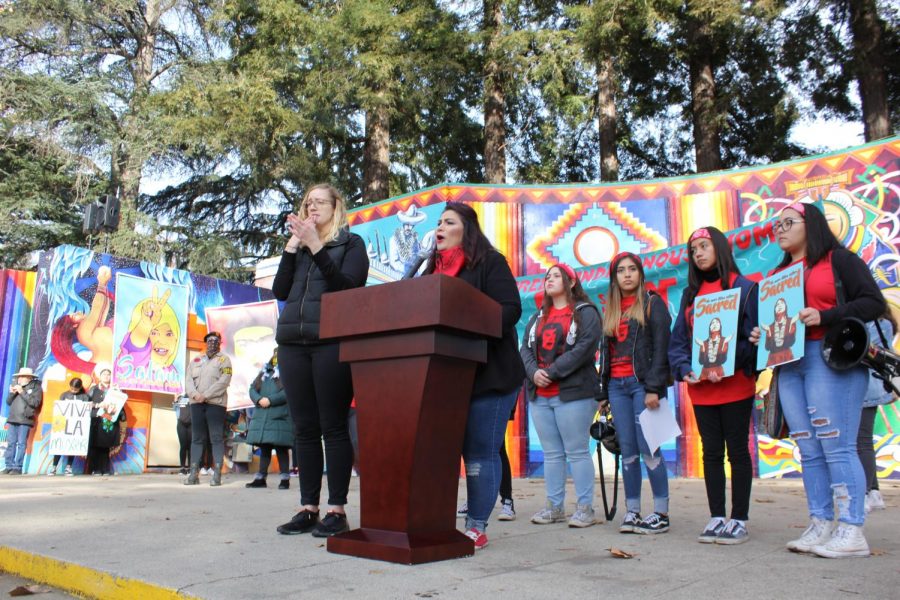 #VivaLaMujer advocate Ruth Ibarra speaks at Southside Park for organization NorCal Resist at the Sacramento Women's March on January 18, 2020. Thousands marched together in support of equal rights at the fourth annual iteration of this event.

“There are a lot of good people who came out,” said Tarango, a Sacramento State criminal justice alumna. “It’s important to have people who whole-heartedly recruit. The native people are always left out. But this is our ground.”

The march began at 10:30 a.m. in Southside Park near Midtown Sacramento with several local organizations such as 350Sacramento, Young Democratic Socialists of America and Sunrise Movement Sacramento joining. Marchers carried signs displaying messages such as “every woman deserves to be paid fairly and treated equally” and “women’s rights are human rights.”

Led by Tarango and the Miwok of Sacramento, the marchers proceeded from the park to the west steps of the Capitol building.

Marchers begin their path to the State Capitol from Southside Park, all for the reason to preserve #HumanRightsForAll @TheStateHornet pic.twitter.com/Mm3qnyoHpf

Sacramento State transfer student Iris Bastet attended the march as community outreach director for Black Womxn United, a non-profit that describes itself as “dedicated to the education, protection, and advancement of ALL Black womxn,” according to its website.

While tabling at the Capitol, Bastet said there were both positive and negative encounters at her station.

“We had a lot of people touching and pulling at our table without permission,” Bastet said, referring to an incident where merchandise for the non-profit was being mishandled.

Bastet said she also dealt with a man who spoke negatively subjects of sex workers and transgender individuals by the Black Womxn United table.

“We had a man who decided to banter, rant, and antagonize my community board member,” Bastet said. “It’s a reassurance of why Black women do the work they do. We need our own space to be around people who understand what we need to be more comfortable.”

Jodi Hicks, president and CEO affiliate of Planned Parenthood to California as of October of last year, said incidents like the one at Bastet’s table have motivated her to continue attending rallies and marches like the Women’s March in the strive for justice over human rights regardless of demographics.

“It’s really important to come together and to take a stand to protect the rights of women and really anyone who is disenfranchised,” Hicks said.

Hicks said she motivates others to vote and to continue to stand up for themselves regardless of the situation, emphasizing the importance the march has in the community.

“This generation of students that I have so much hope in, is you all (who) grew up with this generation of Obama, this theme of hope,” Hicks said. “I think that carries you through right now, where you will be in a time of fight.”

Tarango also pushed young people to resist whatever injustice interrupts their educational journey. Tarango said that one’s identity cannot be defined by anyone other than themselves.

“You have to remember, you have a purpose,” said Tarango. “We are all connected. No matter the background, we are connected to Mother Earth and Father Sky. No matter where you come from, remember who you are.”