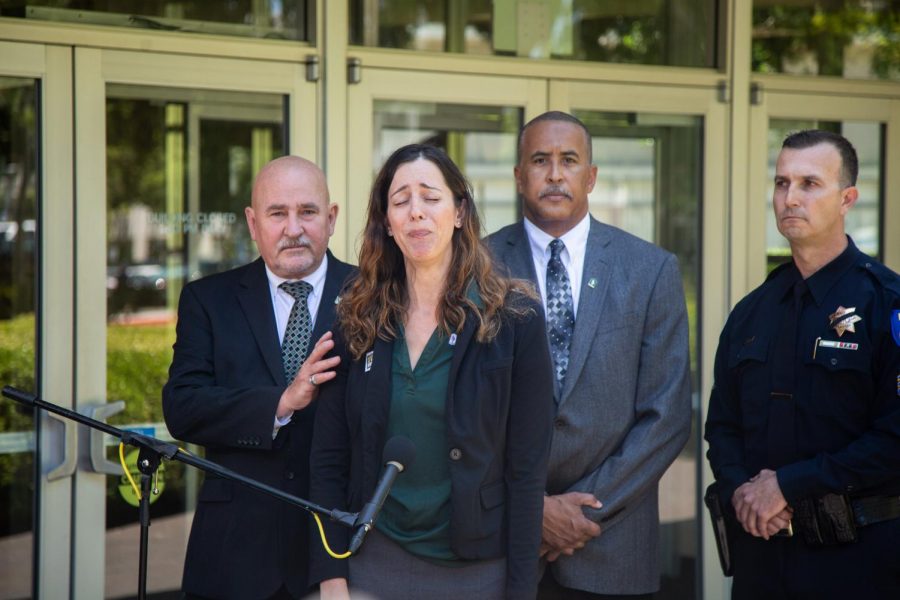 Sac State Career Center Director Melissa Repa talks about Tara O’Sullivan at a press conference in front of Sacramento Hall on Thursday, June 20, 2019. O'Sullivan was a Sacramento Police officer and Sac State alumna who was killed in the line of duty June 19 while responding to a domestic violence call.

Despite Gov. Gavin Newsom’s death penalty moratorium, a Thursday filing by Deputy District Attorney Jeff Hightower revealed confirmation of intent to seek the death penalty for Adel Sambrano Ramos, who was charged with 13 felony counts including one count of murder.

The district attorney’s amended criminal complaint filed Thursday charged Ramos with seven counts of attempted murder of Sacramento police officers and Sacramento County Sheriff’s deputy’s in addition to the murder of O’Sullivan. Ramos was also charged with five felonies in relation to the possession and modification of “AR-15 style” rifles.

“The People of the State of California, by and through Anne Marie Schubert, District Attorney of Sacramento County, notified the defendant Adel Ramos, his counsel, and this court that, in the event, the defendant is convicted of the charged crimes and enhancements, the People intend to seek a sentence of death,” Hightower’s filing reads.

O’Sullivan was killed outside of Ramos’ home June 19 of last year. The 26-year-old was sent to investigate a “disturbance between a male and a female” at the home when she was intentionally struck by firearm, according to the Superior Court of Sacramento County documents.

O’Sullivan was shot by an “AR-15 style rifle” just after 6 p.m. while helping a woman to collect her belongings from Ramos’ home on Redwood Avenue.

Additional officers responded to the scene in an armored vehicle and transported O’Sullivan to a local hospital at 6:59 p.m., where she later died. The suspect continued to fire shots at police, surrendering just before 2 a.m. the next day, nearly eight hours after making contact with the crisis negotiation team.

According to a SacSend email sent out by Sac State President Robert Nelsen June 20 last year, O’Sullivan was among the first to graduate from Sac State’s Law Enforcement Candidate Scholars (LECS) Program in 2017. O’Sullivan also received a degree in child development from Sac State in 2018.

Ramos remains detained in Sacramento County Main Jail without bail and is due back in court May 6.