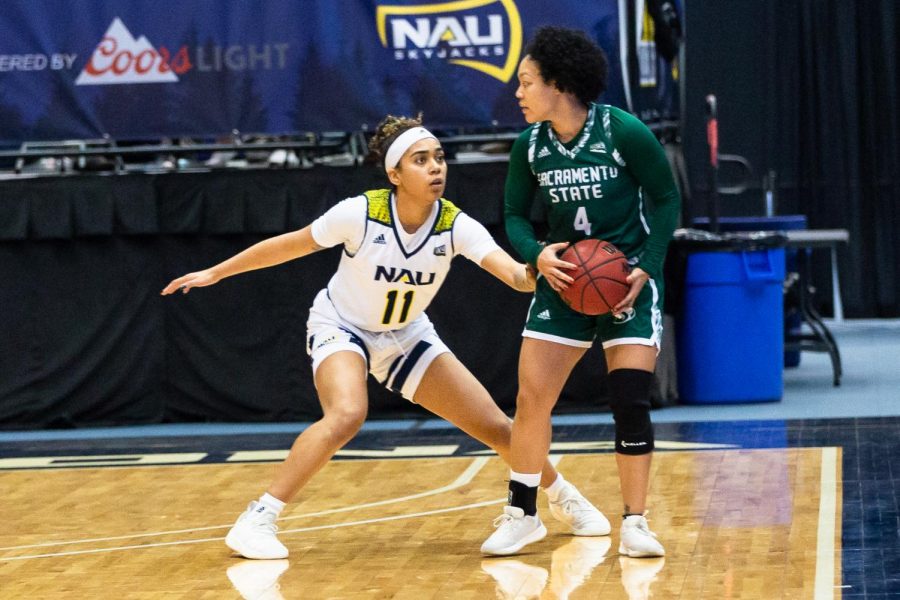 In a fast paced, back-and-forth game, the Sacramento State women’s basketball team lost 114-107 to Northern Arizona University on the road in double-overtime on Thursday night.

Both teams began the first quarter looking to run. Shots were not falling on every possession, yet the Hornets and Lumberjacks continued to rack up the points. Sac State led Northern Arizona 30-22 at the end of the first quarter.

The Hornets struggled mightily in the second period. The Lumberjacks opened the quarter on a 10-0 run to retake the lead at 32-22. Northern Arizona outscored Sac State 32-14 in the second quarter to take a double-digit lead into halftime at 54-44.

Sac State came out aggressive in the third period seeking their first Division I win of the season. The Hornets outscored the Lumberjacks 26-18 to cut their deficit to two points going into the final period at 72-70.

In the fourth quarter, the Hornets outscored the Lumberjacks 20-18 to send the game to overtime tied at 90.

In the first overtime period, Sac State and Northern Arizona locked in on defense and played to another tie, both scoring seven points. For the second time this season, the Hornets went into double-overtime.

Northern Arizona shot the ball well into the second overtime period, making 4-of-7 field goals and 8-of-8 from the free-throw line. The Lumberjacks outscored the Hornets 17-10 in double-overtime to defeat Sac State 114-107 in an exciting contest.

The loss was the fourth in a row for the Hornets as they have yet to win a Big Sky game this season. Sac State had a season-high 107 points scored.

The Lumberjacks were led to the win by sophomore forward Nina Radford who was the game’s leading scorer with 29 points on 11-of-23 from the field, nine assists and five rebounds. Junior guard Caitlin Malvar added a double-double with 17 points and 11 rebounds.

All five starters for Northern Arizona scored at least 15 points. The Lumberjacks’ starting five combined to score 97 of the team’s 114 points. In such a high scoring affair, the Hornets had six players in double-digits scoring.

The Hornets have yet to defeat a Division I opponent this season with their only wins coming against NAIA schools, Cal State Maritime and Pacific Union College.

Sac State will close out its three-game conference road trip on Saturday against Weber State. Tip-off at the Dee Events Center is at 1:05 p.m.