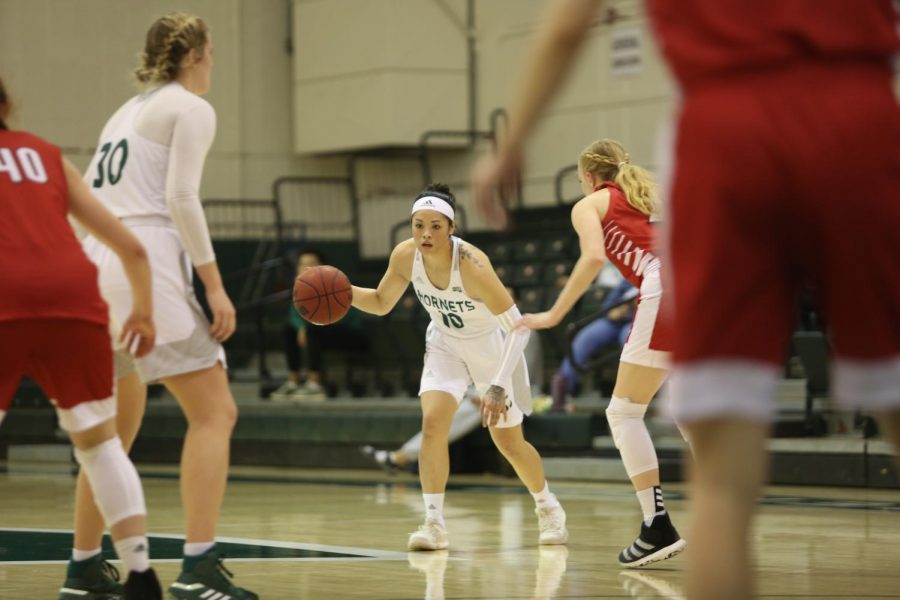 Sac State senior guard Gabi Bade prepares to go around a screen set by senior forward Kennedy Nicholas against Southern Utah on Saturday, Jan. 18 at the Nest. The Hornets defeated the Thunderbirds 87-82.

The Sacramento State women’s basketball team defeated Southern Utah University 87-82 at the Nest on Saturday afternoon to earn its tenth win in a row against the Thunderbirds.

The Hornets (4-12, 2-5 Big Sky Conference) earned their first Big Sky home win with the narrow victory against the Thunderbirds (8-7, 2-4). With the win, Sac State has won two of its last three games after beginning the season 2-11.

In the first quarter, the two teams traded baskets back and forth. The Hornets led for most of the quarter by dominating in the paint, outscoring the Thunderbirds 14-4. Sac State held a 21-19 lead after the first period.

Senior guard Camariah King made a 3-pointer with 7:24 left to give the Hornets a 71-66 lead. Following the basket, Southern Utah would go on a 10-0 run to retake the lead.

In past games, Sac State might’ve folded after giving up the lead. However, on Saturday, the Hornets used past experiences to lead the charge to victory. Sac State responded to the Thunderbirds’ run with a 10-0 run of their own to retake the lead at 81-76 with 38 seconds left.

“We’ve had a lot of experience with getting down when another team gets a run,” said sophomore guard Tiana Johnson. “Our main priority was to remain calm and just know that if they go on a run, we can go on a run if we just execute.”

The final run essentially clinched the victory for the Hornets, as they sunk six clutch free throws to erase any doubt and outscore the Thunderbirds 24-19 in the fourth quarter. Sac State defeated Southern Utah 87-82 for its tenth consecutive win dating back to 2014.

“We’ve been in that situation and failed a lot,” coach Bunky Harkleroad said. “You want to think that eventually, you start to get better in those tough situations. The ball bounced our way and we found a way to get it done.”

“Every year against Southern Utah it’s some crazy game,” said senior forward Kennedy Nicholas. “A huge difference between their team (and ours) is they’ve been together for four years. They play super well together. Us being a new team, that’s what we’re trying to get to but they have so much experience as a team which is rare in this league.”

@Kennedy_joyy was dominant today as she put up a double-double with 24 points, 17 rebounds (7 offensive) and 6 blocks.

Leading the charge for the Hornets once again was the trio of Nicholas, Johnson and King. The three players scored 79% of Sac State’s points with 69-of-87. On Thursday against Northern Colorado, the trio scored 89% of the team’s points with 56-of-63.

“I think we’re still figuring a lot of that out,” Harkleroad said. “We do have other people that can score, but right now, those three are definitely playing at a higher level offensively.”

Dominating on the glass for the Hornets was Nicholas who had a double-double with 24 points, 17 rebounds (seven offensive) and six blocked shots. Johnson matched her teammate with a career-high 24 points on an efficient 9-of-15 from the field and 4-of-4 from the free-throw line while adding five rebounds. King scored 21 points for her third consecutive game with over 20 points.

Southern Utah received a strong performance from two of their senior guards. Harley Hansen scored a game-high 25 points on 8-of-15 from the field and 6-of-11 from three. Cardenas had a double-double with 19 points, 12 assists and four rebounds.

“They are a really solid team,” Johnson said. “They didn’t lose any players and Cardenas is still really fast and they have some good shooters. So I think it was a really good matchup.”

The Hornets will now go on the road for one game at Portland State as they try to continue building momentum.

Tip-off at the Peter W. Stott Athletic Center is set for Thursday at 7:05 p.m.