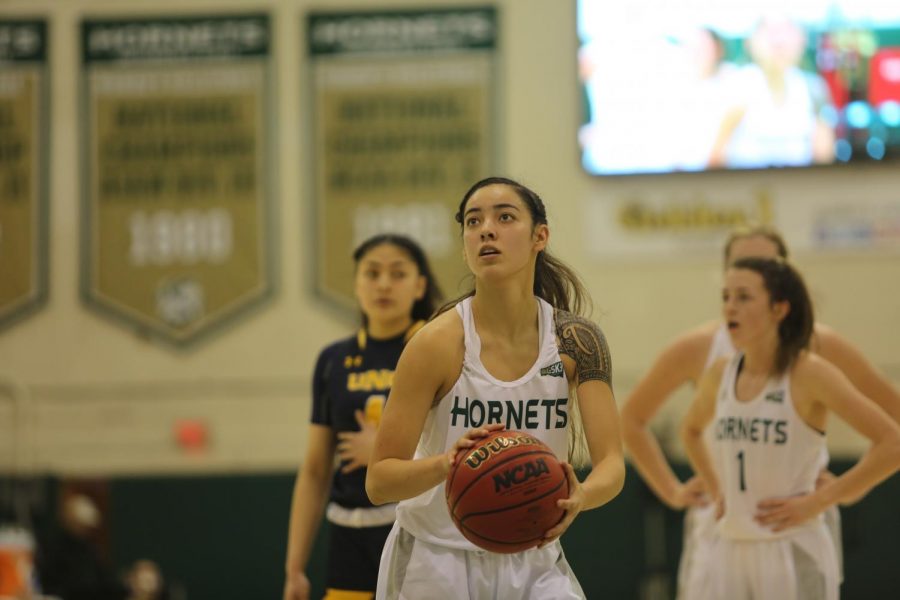 Sac State freshman guard Jordan Olivares prepares to shoot a free throw against Northern Colorado on Thursday, Jan. 16 at the Nest. The Bears defeated the Hornets 73-63.

In front of a group of elementary school students, the Sacramento State women’s basketball team lost to the University of Northern Colorado 73-63 Thursday afternoon at the Nest.

The Hornets (3-12, 1-5 Big Sky Conference) returned home to the Nest following a three-game road trip across the Big Sky to take on the Bears (7-7, 3-2). Following an 80-62 loss at Idaho State, the Hornets played a competitive road trip.

Sac State lost in double-overtime at Northern Arizona University 114-107 but followed the tough loss with their first Division I win of the season, decimating Weber State 91-67.

“It felt great, especially just how hard we had to work that weekend,” said senior guard Camariah King about the win. “We played NAU at 7,000 feet (and) we were dying, so we came up short that game. We really wanted that one, so to come out on top at Weber, it was great.”

With a noon tip-off due to Field Trip day for elementary school kids, both teams came out sloppy. In the first five minutes, the Hornets and Bears combined to shoot 3-of-16 from the field with nine turnovers as Sac State led 7-4.

The Hornets closed out the quarter on a positive note, outscoring Northern Colorado 13-8 to end the quarter with an eight-point lead at 20-12.

In the second quarter, inconsistency reared its ugly head once again for Sac State. The Bears outscored the Hornets 25-6 in the second period to take a 37-26 lead into halftime.

“A lot of that came on the defensive end,” said senior forward Kennedy Nicholas about the team’s second quarter struggles. “I think we got a little complacent. They slowly got some buckets back and we weren’t really aware of it until it was tied back up. Then we tried to kick it back into gear, but we’d already lost momentum and so it was kind of playing catch up for the last two quarters.”

Sac State attempted to mount a comeback in the third quarter, however, it was matched by Northern Colorado. The Hornets outscored the Bears 23-21 in the third period, yet trailed 58-49 going into the final quarter.

Northern Colorado and Sac State played an even fourth quarter, as the Bears outscored the Hornets 15-14. The poor second quarter proved to be insurmountable for Sac State to overcome. They ultimately lost to Northern Colorado 73-63.

Sac State senior guard Gabi Bade has scored in double-digits for the Hornets in seven of the team’s first eight games. However, Bade did not play Thursday for the third consecutive game due to injury.

“Gabi has two injuries going on,” said coach Bunky Harkleroad. “She has a back injury and a heel injury and she has not been feeling well at all. Right now I’m more worried about her big picture health and her wellbeing as a person.”

The Bears were led to the win by four players scoring in double-digits as junior guard Alexis Chapman and freshman guard Jasmine Gayles each scored a team-high 16 points. Graduate forward Ali Meyer had a double-double with 12 points and 11 rebounds.

“I feel like in the Big Sky, everyone can kinda win the game,” King said. “It’s kind of up in the air. There’s no one that’s truly dominating like that.”

The trio of King, Nicholas and sophomore guard Tiana Johnson combined for 56 of Sac State’s 63 points. King scored a game-high 24 points on 9-of-14 from the field and 4-of-6 from three. Nicholas had a double-double with 19 points and 11 rebounds. Johnson added 13 points and six rebounds.

“It’s really nice to see Camariah consistently getting those numbers up, that really helps us,” Nicholas said. “It was nice to see (Johnson) up there as well. She didn’t have the best weekend last weekend scoring-wise, but we all know she can get some buckets.”

The Hornets play next on Saturday when they host Southern Utah University at 2:05 p.m.