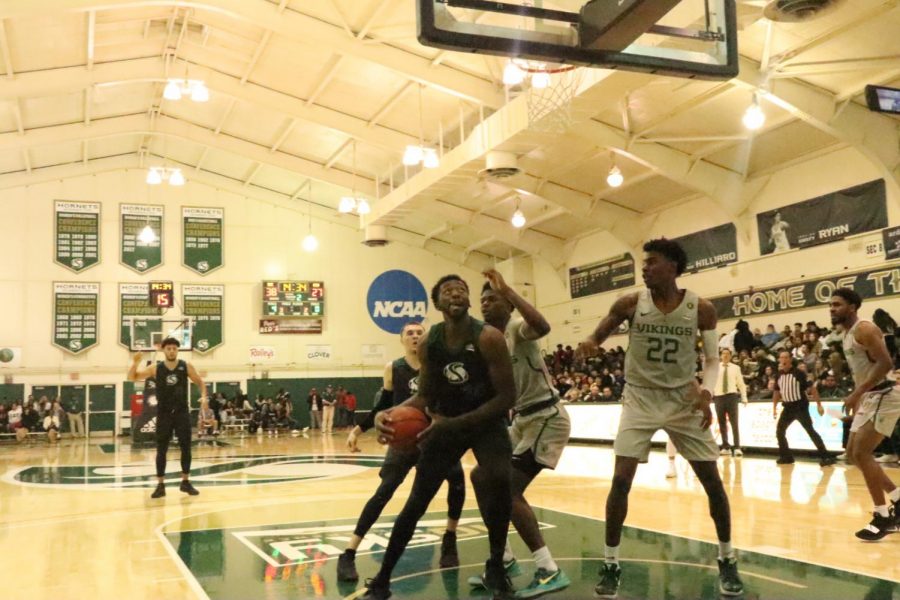 Sac State senior center Joshua Patton drives to the bucket against Portland State at the Nest on Thursday, Jan. 23. Patton scored eight of his 12 points in the second half.

A crowd of over a thousand watched the Sacramento State men’s basketball team defeat Portland State 66-55 at the Nest Thursday night, as the Hornets used a strong second half to defeat the Vikings.

The Hornets came out of the gate slow offensively, going 1-7 from the field in the first five minutes. This could be attributed to the Vikings’ aggressiveness on defense, coming out in a full-court press from tip-off. Head Coach Brian Katz put an emphasis on the press to ensure that his players were ready for this game coming in.

“We prepared for it all week,” Katz said. “They press all the time. That’s their deal. They want an up-down tempo.”

After trailing 11-17 with 6:52 left in the first half, the Hornets went on a 12-0 run sparked by air tight defense and the team getting to the foul line. Senior forward Chibueze Jacobs provided an energy boost off the bench for the Hornets.

Jacobs hit a layup to tie the game and assisted a big three by junior guard Bryce Fowler that gave Sac State their first lead of the game. The Hornets went into the half with a 27-23 lead.

“I literally do everything I can for the team,” Jacobs said. “That’s my role. Whether it’s rebounding the ball, handling the ball, hitting open shots when I need to, and just playing hard on defense.”

In the second half, the Hornets got off to a quick 7-2 run by picking up their defensive intensity and having their way in the paint. The Hornets were also nearly perfect from the free-throw line making 13-14(92%). Senior center Joshua Patton and junior forward Ethan Esposito led the way, scoring 22 of the Hornets’ 39 second half points.

“Just energy, the energy we had today and our aggressiveness,” Esposito said. “Especially defensively, if we can do the same thing over there then we’ll be good.”

The Hornets look to get their first win on the road since Dec. 7 on Monday night. Tip-off is set for  6:00 p.m. at Northern Arizona University.