Hornets fall 69-54 to the Lumberjacks 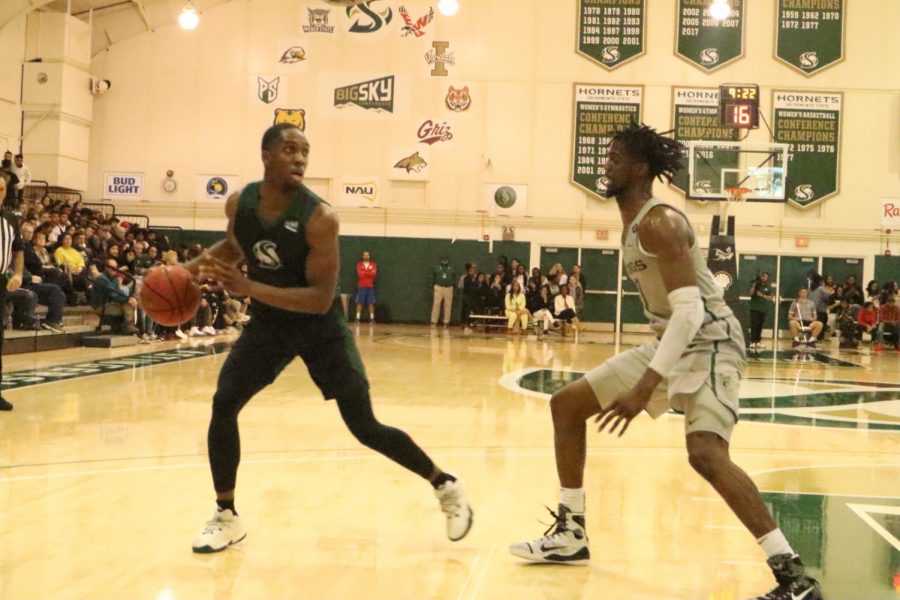 Sac State senior forward Chibueze Jacobs dribbles down the court against Portland State at the Nest on Thursday, Jan. 23. The Hornets fell to Northern Arizona 69-54 on the road Monday night.

The Hornets (11-7, 4-5 Big Sky Conference) traveled to Flagstaff, Arizona in the hopes of coming back with their first road win of conference play.

The Hornets are now 0-5 on the road versus Big Sky opponents and are losing those games by an average of 15.2 PPG.

Coming out in the first half the Hornets looked solid, picking up where they left off defensively against Portland State on Thursday night. There was also help offensively off the bench from junior guard Bryce Fowler who was a spark plug with nine first half points. At this point, the Hornets were in control 20-13.

However, the Lumberjacks were able to find their offensive rhythm by making it count at the free-throw line, which propelled them to a 12-0 run to close out the first half.

Sac State is known for its ability to dominate down low and control the paint, so Northern Arizona made it a point to draw them out to the three point line. The Lumberjacks succeeded as the Hornets put up a season-high 23 three point attempts and hit only six (26%).

Northern Arizona kept their foot on the gas in the second half, continuing to draw fouls and put themselves at the line. Senior center Joshua Patton picked up his fifth foul with eight minutes left to play to foul out for the sixth time this season.

The Lumberjacks held a comfortable lead going up by as much as 22 points, ultimately securing the win. Junior forward Ethan Esposito led the Hornets with 11 points. Senior forward Brooks Debisschop lead the way for the Lumberjacks with 15 points shooting 50%.

The Hornets’ home-road record has been a true tale of two teams this season. The Hornets look to defend the Nest against Eastern Washington on Saturday. Tip-off is set for 7:05 p.m.