Hornets remain undefeated at home with victory over Lumberjacks 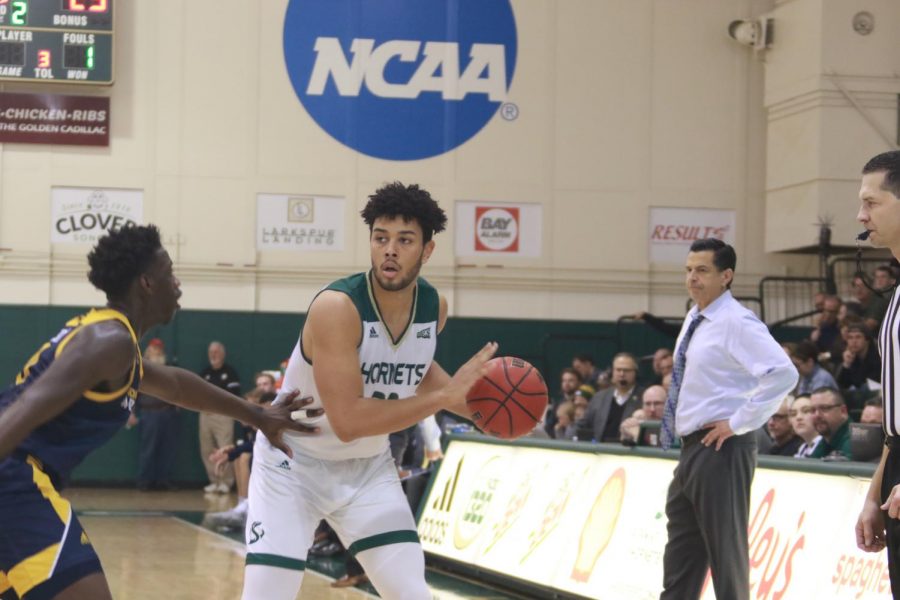 Sac State junior forward Ethan Esposito looks for a teammate to pass to against Northern Arizona on Thursday, Jan. 9 at the Nest. The Hornets defeated the Lumberjacks 64-57 on Thursday night.

A dominant first half for the Sacramento State men’s basketball team propelled them to a 64-57 victory over Northern Arizona University on Thursday night at the Nest.

With the win, the Hornets (9-4, 2-2 Big Sky Conference) remained undefeated at home with a 6-0 record. The Lumberjacks (7-6, 1-3) were attempting to win their second consecutive conference game.

Sac State came out strong to begin the game. The Hornets got out to an early 10-4 lead four minutes into the contest. Sac State led 14-11 halfway through the first half. From that point on, the Hornets would go on a dominant run.

The Hornets outscored Northern Arizona 27-10 to end the first half and take a commanding 20-point lead into halftime at 41-21.

“I think in the first half it was easier for us to communicate, like the team as a whole,” said senior forward Osi Nwachukwu. “Cause on the defensive side we’re right next to our bench so everybody on the bench could be yelling out this and that and they’re helping us.”

Sac State coach Brian Katz said that the first half success stemmed from the Lumberjacks failing to make any 3-pointers.

In the second half, the two teams played evenly through the first four minutes. The Hornets led the Lumberjacks 47-27 with 15:52 remaining in the game.

Northern Arizona went on a 23-8 run over ten minutes to trim their deficit to five points with five minutes remaining.

“In the first half we were spot on when guys were catching the ball, we were right there all the time or pressuring the ball,” said senior center Joshua Patton. “In the second half, we were letting guys slip open and get easy layups off of out-of-bounds plays. We weren’t playing good post defense and we just weren’t locating shooters well enough.

Sac State locked down on defense over the final five minutes to secure the win. The Hornets would go on to defeat the Lumberjacks 64-57 in an entertaining Big Sky game. The 9-4 start for Sac State marks the best 13-game start in the Division I era.

“We played a phenomenal first half,” Katz said. “We’re up 20 at (the) half and you know, teams are going to answer. They came back, cut it down to five but we hung on and won. They’re a very good team, so it’s a big win for us.”

Sac State was led to the win once again by Patton. The captain had two game-highs, with 23 points on 10-of-13 from the field and seven rebounds.

However, Patton was not satisfied with his performance. Hear more from the team captain in this postgame interview:@TheStateHornet @SH_Sports pic.twitter.com/DBJ79KH9bE

The Lumberjacks had three players score in double-digits. Senior forward Brooks DeBisschop had a team-high 15 points on 7-of-14 from the field with five rebounds. Junior guard Cameron Satterwhite had 12 points and sophomore guard Cameron Shelton scored 10 points.

“(This game) had all aspects that we had been preparing for,” Nwachukwu said. “It was just a full all-around game that we love to play.”

Sac State will close out a three-game conference homestand on Saturday night against Weber State with tip-off at 7:05 p.m.