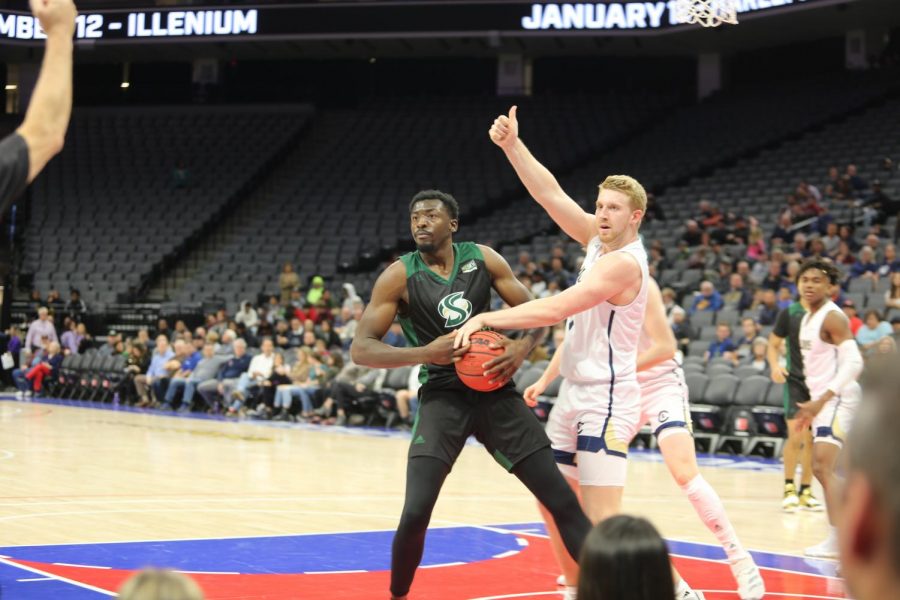 Sac State senior center Joshua Patton fights for a loose ball with UC Davis junior forward Kennedy Koehler against the Aggies on Wednesday, Nov. 20, 2019 at the Golden 1 Center. Patton scored a game high 17 points but The Hornets lost on the road at Northern Colorado on Thursday night.

The Sacramento State men’s basketball team had its three-game winning streak snapped on the road at the University of Northern Colorado with a 71-52 loss Thursday night.

On their last homestand, the Hornets (10-5, 3-3 Big Sky Conference) continued to hold down home court at the Nest, winning all three games. The Bears (11-5, 4-1) were attempting to remain undefeated at home as well with a win over the Hornets.

Sac State and Northern Colorado played an even first five minutes, tied at eight. Halfway through the first half, the Bears led 20-14 following two made free throws from senior guard Jonah Radebaugh. Sac State closed the first half with back-to-back buckets to trim the deficit to three at 33-30.

The Hornets came out hot to open the second half with a 7-0 run to retake the lead at 37-33 before the Bears responded with a 7-0 run of their own. With 13:13 remaining in the game, Sac State sophomore forward James Bridges nailed a 3-pointer to tie the game at 40.

Over the next seven and a half minutes, the Bears went on a 20-4 run to seize control of the game. Northern Colorado would go on to defeat Sac State 71-52 to remain undefeated at home.

Northern Colorado was led to the win by a trio of players scoring in double-digits. Senior guard Trent Harris had a team-high with 14 points on 4-of-7 from three. Harris was followed by Radebaugh with 13 points and sophomore guard Sam Masten with 12.

Sac State was led in scoring once again by senior center Joshua Patton. The captain scored a game-high 17 points on an efficient 8-of-11 from the field with five rebounds. Junior forward Ethan Esposito contributed 10 points and a game-high seven rebounds.

The Hornets conclude their road trip on Saturday afternoon against Southern Utah University with tip-off set for 12:05 p.m.