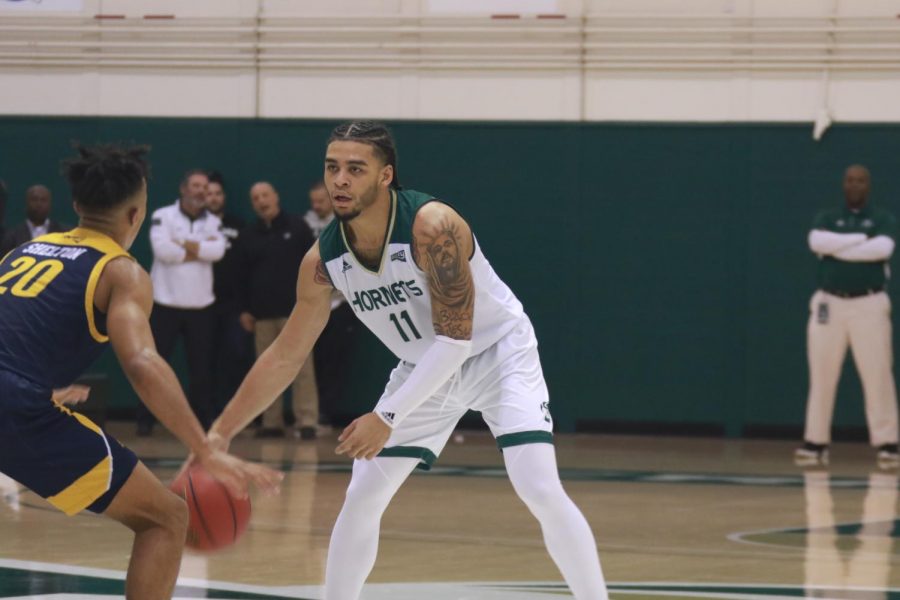 Following consecutive losses in its first two Big Sky conference games of the year, Sac State (10-4, 3-2 Big Sky) has won three conference games in a row and all seven games inside the Nest this season.

The winning streak puts the Hornets at their best season start since the 1987-88 season, according to Hornet Sports.

“These last three games, we’ve just been trying to protect home court,” said senior guard Izayah Mauriohooho-Le’afa. “Everyone that came out tonight and the last two games showed real encouragement and passion for us and we had to get the W for them.”

Both offenses started the game slowly. The Hornets shot 6-16 from the field while the Wildcats shot 4-20 from the field in the first 13 minutes of the game.

Junior guard Bryce Fowler sparked the Hornets’ offense off the bench. Fowler scored seven first-half points and helped spark an 11-0 run to push the Sac State lead to 25-13 with under two minutes to play in the half.

The Hornets connected on four first half 3-pointers and shot 38% from the field to take a 28-18 halftime lead.

Sac State entered the game ranked fifth in the country in field goal percentage defense and held Weber State to 25% shooting in the first half.

“Our guys have really bought in,” said head coach Brian Katz. “We keep telling them if we defend and we rebound, no matter if we have the worst offensive game, it’ll carry you. Offense comes and goes, defense you can always count on.”

The Hornets continued to control the game in the second half and extended their lead to as many as 14 points after a made 3-pointer by sophomore guard James Bridges with 13:32 remaining in the game.

Weber State (5-11,1-4 Big Sky) cut the lead to eight on two separate occasions but Mauriohooho-Le’afa responded both times to push the lead back to double digits.

After a bucket from the Wildcats cut the lead to 50-42 with 8:40 left in the game, Mauriohooho-Le’afa knocked down a corner jumper.

Sac State shot 48% for the game, made eight 3-pointers, and held its 12th opponent this season to under 60 points in its 71-57 victory over Weber State.

The Hornets out-rebounded the Wildcats 36-28 and scored 15 second-chance points from 14 offensive rebounds.

“We’re the number one team in the Big Sky in rebounding,” Katz said. “The rebounding is such a big deal because sometimes we can be a suspect shooting team so the offensive boards give us a chance to make up for that.”

“He’s aggressive every game and has gotten more aggressive each game,” Mauriohooho-Le’afa said of Esposito. “He’s an undersized big but he’s tough and strong and plays hard. You can’t teach heart.”

Mauriohooho-Le’afa finished with 14 points, including four made 3-pointers, and 6 assists.

“Our guys now understand that Big Sky play is very simple, there are no knockout punches,” Katz said. “Every night is a fistfight and it goes 15 rounds. This is such an equal league and always has been from the beginning of its time.”

Sac State will face Northern Colorado on the road Thursday. Tip-off is set for 6:05 p.m.