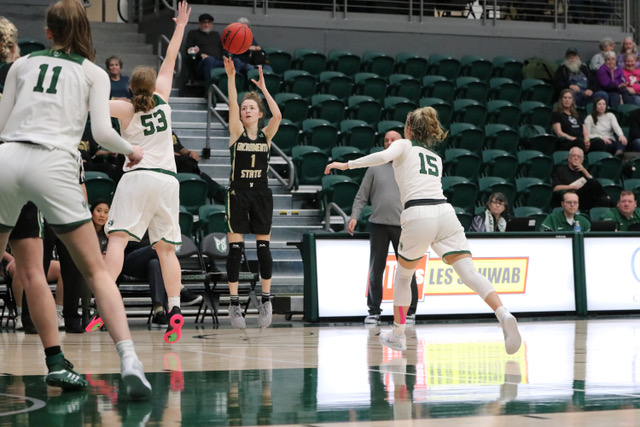 Following a 73-70 victory at Portland State on Thursday night, the Sacramento State women’s basketball team has won back-to-back games for the first time this season.

The Hornets (5-12, 3-5 Big Sky Conference) have now won three of their last four games after beginning the season 2-11. The Vikings (11-8, 5-4) came into the game on a hot streak, winning three games in a row and five of their last six in Big Sky play.

Sac State started off strong, leading 7-0 three minutes into the contest. Portland State made a comeback, outscoring the Hornets 14-6 to take the lead for the first time at 14-13 with two minutes left in the first quarter. Sac State held an 18-14 lead after one period.

The Hornets continued to play well in the second quarter, outscoring Portland State 21-17 to take an eight-point lead into halftime at 39-31.

After a made jump shot from senior forward Kennedy Nicholas gave the Hornets a 41-31 lead, the Vikings made their run. Portland State went on a 13-2 run over four and a half minutes to retake the lead at 44-43.

The Hornets responded and closed the third quarter with a narrow 54-52 lead. The Vikings outscored Sac State 21-15 in the third period. However, it was the Hornets’ ability to limit the damage that kept them in the game.

Sac State controlled the entire fourth quarter, never conceding the lead, althoughPortland State was able to tie the game on multiple occasions.. The Hornets outscored the Vikings 19-18 in the final quarter and would go on to win 73-70.

Nicholas led the charge for Sac State with a dominant performance. The senior forward scored a game-high 28 points on 12-of-25 from the field with nine rebounds, five steals and two blocks. Sophomore guard Tiana Johnson was the only other Hornet to score double-digits as she contributed 12 points and seven rebounds.

The Vikings had all five of their starters score in double-digits but it was not enough to take down the Hornets. Junior forward Tatiana Streun and sophomore guard Desirae Hansen each scored a team-high 15 points in the loss. Hansen added six rebounds to her stat line while Streun grabbed five.

The Hornets will attempt to keep their momentum going when they return home to the Nest for one game against Northern Arizona University Monday night. Tip-off time is set for 7:05 p.m.