Bridges was the first Black student to desegregate a southern school 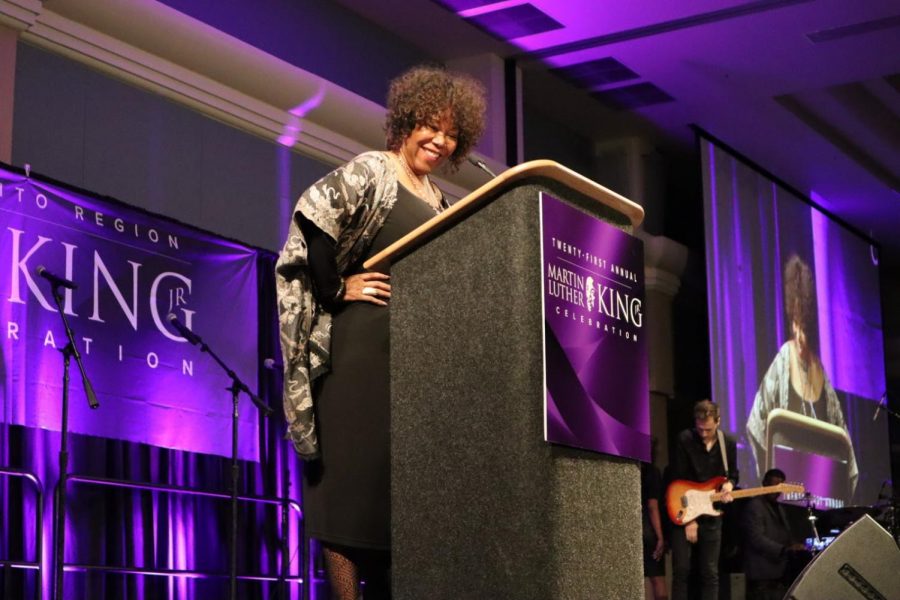 Racial equality activist Ruby Bridges addresses the crowd during the 21st Annual Martin Luther King Jr. Celebration at the Sac State Union Ballroom on Sunday, Jan. 26. Bridges was recognized for being the first Black child to desegregate an elementary school in the south.

Bridges was the first Black child to desegregate an elementary school in the south when, in 1960, she attended William Frantz Elementary School in Louisiana at six years old, according to the Sacramento MLK Committee.

Bridges captured the audience with a touching speech about her life and legacy. She told the crowd that she was unaware of what was transpiring around her while attending William Frantz Elementary School, as all she knew is that she was going to school.

“What protected me was the innocence of a child,” Bridges told the crowd.

Bridges’ speech shifted from storytelling to a challenge for the audience, when she asked them to do good regardless of race. Bridges said that there is an “us and them. It’s good and evil.”

Sacramento Mayor Darrell Steinberg also awarded Bridges with a key to the city.

The Martin Luther King Jr. Celebration is an annual event that strives to honor both King and other civil rights activists, according to their website. Tickets for Saturday’s sold-out event were $100 a person.

Guests came from throughout the Sacramento region to celebrate King’s legacy. The evening included a musical performance by iSound School of Performing Arts, several speeches regarding the cultural impact of King, and an excerpt from King’s iconic “I Have a Dream” speech played for the audience.

Sac State President Robert Nelsen said the celebration is “one of the most amazing events that happens at Sac State.” In his speech, Nelsen commended Bridges’ bravery in attending an all-white school as a child, and the impact it had on her and her family.

“At a time of such divisiveness and polarization, it’s Ruby in her person and in her message that stands as a monument of unity,” Williams said.

Awards were also presented to student winners of sixth to 12th for the MLK essay contest, a contest won by submitting an essay in response to a question posed by Martin Luther King Jr. — “what are you doing for others?”

The night ended with Hazel Mahone being presented the Robert T. Matsui Community Service Award by Congressmember Doris Matsui. Mahone is the CEO of Vision 2000 Educational Foundation, which works to close the achievement gap in public schools.

In her speech, Mahone said she was honored to receive the award and was happy to “share the evening with national treasure Ruby Bridges.” When Mahone finished her speech, the night ended just as it began, uplifting and full of music.