EDITORIAL: It’s better to get it right than to get it first 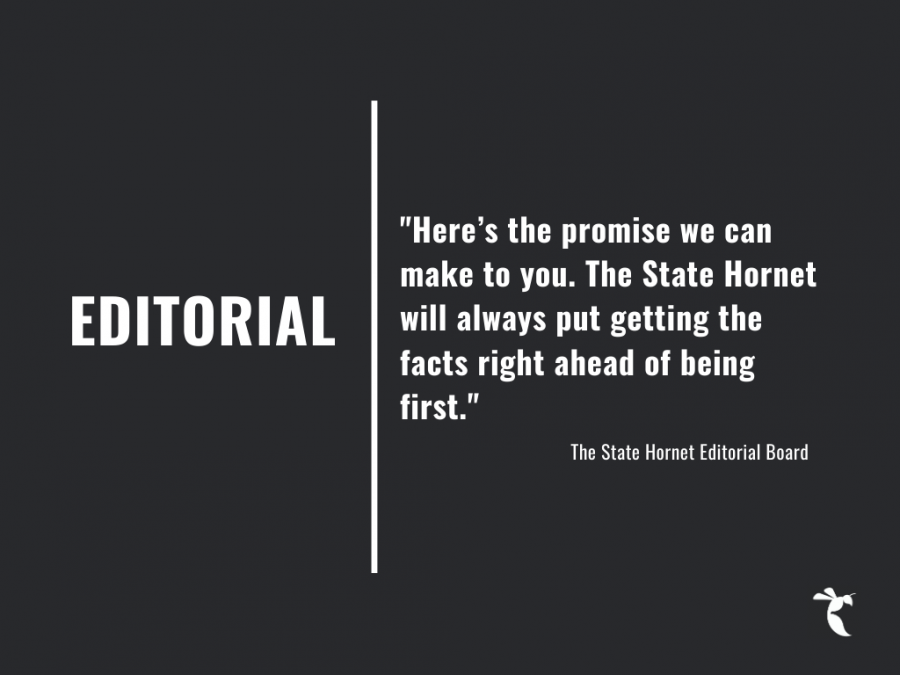 Sunday’s news of Kobe Bryant, his 13-year-old daughter Gianna, and seven others’ deaths in a helicopter crash in Calabasas, California sent ripples through not only the sports community, but the world.

As one of the most famous basketball players of all time and a household name, the news was shocking. Not just that, but just as quickly as the news broke out, the public desperately searched for answers and details through news sources.
But what audiences were met with was a disgraceful flood of misinformation and a desperate race to be first.

It all started with TMZ, a tabloid news organization whose website touts itself as “breaking the biggest stories in celebrity and entertainment news.” Living up to that characterization, TMZ broke the news of Bryant’s death.

The celebrity gossip site is notorious for publicizing pretty much anything that will cause a stir. And maybe this is the core reason why when TMZ broke the news, many social media users reacted in disbelief.

The truth is that TMZ gets it right. It’s not a matter of accuracy. The problem is the lengths they will go to in order to be first and the means they use in order to gather information (which is often paid informants) is not in line with standard journalistic ethics.

As I said, the question with TMZ is not often about accuracy. But about the human cost to being first. Journalistic organizations care about that, they do not https://t.co/qUL9UtRLeP

“If TMZ reports that a celebrity has died in Los Angeles County, it is almost always correct. For whatever reason, and you can read into this, their accuracy rate in Los Angeles is very, very good,” Matthew Belloni, the editorial director of The Hollywood Reporter, told CNN in a phone interview Sunday.

In the case of Bryant’s death, TMZ reported the news before his family was notified. According to CNN, Los Angeles County Sheriff Alex Villanueva called out the tabloid outlet in a press conference Sunday.

“It would be extremely disrespectful to understand that your loved one … perished and you learn about it from TMZ,” Villanueva said. “That is just wholly inappropriate.”

LA County Sheriff rightly slams TMZ for breaking the Kobe news before his family could be informed. They are a despicable organization.

TMZ did not wait until Bryant’s family was informed of what had transpired to report the news. And some may argue, with a fair point, that that’s their job. If it hadn’t been TMZ, it would have been someone else.
One of the Society of Professional Journalists Code of Ethics tenants is to minimize harm. The State Hornet and many other professional news outlets adhere to these standards.

“Ethical journalism treats sources, subjects, colleagues and members of the public as human beings deserving of respect,” the code reads.

Letting Bryant’s family be informed of his death before publicizing it would have been respectful.

The problem is that in their rush to be first — one that did not initially include the death of Gianna Bryant — TMZ created a ripple effect.

Fox’s daughter confirmed that he was, in fact, alive.

FOX: Kobe Bryant and 3 others killed.

I hope some people lose their jobs today for rushing reports.

Tragedies need to be handled with the utmost care, and big time news organizations like ABC, ESPN and FOX should know better. ESPN is owned by ABC, meaning that ultimately, the same company made two very big mistakes.

The rush to get as much information as soon as possible, without first getting proper verification, was nothing short of irresponsible.

Here’s the promise we can make to you. The State Hornet will always put getting the facts right ahead of being first. We will always consider minimizing harm as a top priority.

As a reader of The State Hornet, you’re who we aim to serve. We can’t do that properly if we’re prioritizing being first before doing our due diligence as journalists and making sure we have all our facts confirmed and double checked.

In a world where misinformation spreads like wildfire, we’d rather be right than be first.