Unlucky in Love: The Best Heartbreak and Rejection Songs of the Decade

Beyonce, Taylor Swift, Drake, and others sing about pain and loss in the 2010s 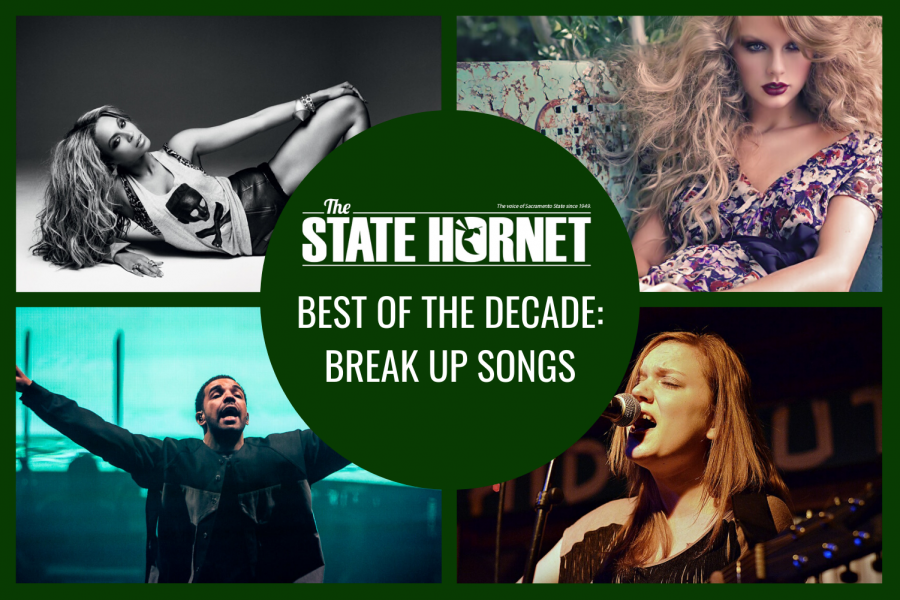 The concept of “Sad Bastard Music” has appealed to me since I heard the term in the film “High Fidelity,” where John Cusack plays miserable record store owner Rob Gordon who is in the throes of a breakup.

As a means of processing his emotions or perhaps pushing them away altogether, Gordon starts making “top fives” of the most miserable moments of his life, such as his top five breakups.

It’s a self-defeating process that only serves to make Rob more miserable and morose and perhaps that’s the whole point. Gordon openly questions his tendency to comfort himself by listening to miserable songs written by what he calls “Sad Bastards” who glamorize rejection, loss and unrequited love.

In the film, Gordon ponders whether we should shield impressionable teenagers from the most celebrated songwriters of pop culture:

“People worry about kids playing with guns, or watching violent videos, that some sort of culture of violence will take them over. Nobody worries about kids listening to thousands, literally thousands of songs about heartbreak, rejection, pain, misery and loss.”

I confess I have more than a few of the same tendencies as Rob. Like him, I can get lost in a spiral of depression while listening to my favorite self-pitying anthems of pain and misery. Am I naturally this way or is it the music that’s feeding my isolation and unhappiness?

I need to process this thought exercise by cataloging my own favorite heartbreak songs of the 2010s and bringing this tumultuous and torturous decade to a close. In no particular order, here are my top ten:

Beyonce: “I Miss You”

Beyonce has the voice and charisma that is going to save America’s soul and on this cut from 2011’s “4” she is at the peak of her tectonic-shifting powers.

Usually, Bey is the impenetrable, unstoppable badass of pop music but on this Frank Ocean-penned track, she displays her vulnerability. Queen Bey’s only accompaniment is a simple, stark 808 beat and cold, atmospheric synths.

All she needs is that voice, with its unparalleled expressive power, to tear you to pieces. Ocean’s ruminating, plaintive lyrics read like soul-bearing letters to a love that Bey can’t seem to wrap her mind around.

She isn’t mournful or complacent but she seems to roar with anger and inner turmoil when she says “It hurts my pride to tell you how I feel, but I still need to.” What makes me gasp every time I hear that line is how the ire seems to be pointed inward, toward herself and no one else.

“I Almost Do” by Taylor Swift

Any catalog of heartache would be woefully incomplete without a diary entry from the master breakup songsmith of our times, Taylor Swift.

T-swizzle has so many classics of the genre, that it was hard to pick just one but I settled on this deep cut from 2012’s “Red.” The soft, folk-rock acoustic strums on here are delicate enough to make Lindsey Buckingham weep and Swift’s confessions of heartsick woe are enough to get me to light some scented candles and journal my fervent angst.

“Never Been Wrong” by Waxahatchee

Katie Crutchfield knows what it’s like to want to “win” the breakup and on “Never Been Wrong,” she ditches her abstract poet tendencies and just sings about her insecurities.

Coming out ahead of the ex is the main goal of any falling out and Crutchfield demonstrates just how futile and hopeless it is with raw honesty and a massive, driving, U2-ish composition. She sings with a knowing resignation that no matter how strong she appears, she’ll never win: “Everyone will hear me complain, everyone will pity my pain, does it make you feel good to watch me stumbling in the dark?”

Crutchfield suggests that maybe we should just forfeit instead of trying to overcome an insurmountable margin of victory.

One of the songs on this last had to ROCK and for that task, I nominated Toronto’s preeminent angsty, punk rockers, PUP. On “DVP” from 2016’s “The Dream is Over” we’re treated to a chaotic, urgent dirge from a raging alcoholic attempting to come to terms with their damaged heart.

PUP’s fast-paced, kinetic playing matches the tone-deaf sing-shouting vocal performance perfectly. The band bashes out their notes like they’re strung out on speedballs and on the run from police while the lead singer spews out these self-loathing lines: “I’ll drink ’til I’m staring at the ceiling / I’ll be just fine, I’m numb and losing feeling / I can’t tell lies anymore.”

This song is utterly debauched and unhinged but the pain is real and heartfelt. There’s contrition and regret in “DVP” and its soaked in booze and toxic masculinity.

If Swift is the queen of the sincere diary entry, then Drake is the duke of the toxic fuckboy anthem and in 2011’s “Marvin’s Room” he reaches peak sad, sick dirtbag status.

Nothing screams asshole quite like drunk dialing an old flame and sabotaging her new relationship while casually boasting about “having sex four times this week.” And yet… we feel a surging empathy for somebody we would probably label a toxic mess in real life.

It’s gotta be the passion and pathos with which Drizzy invokes the dark side present in all of us. Perhaps we see a bit ourselves in this destructive, hurtful and hurting alcoholic. The best heartbreak songs acknowledge a universal truth that’s present in our worst moments.

Instead of making that call, hopefully, you’ll just listen to “Marvin’s Room” and have that sobering reminder.

It’s difficult to blend disparate styles in music, but Nashville alt-country singer Lydia Loveless makes it seem natural on the catchy yet mournful “Longer.” It’s not quite pop-punk, not quite country but some weird hybrid earworm that’s as addictive as its lyrics are relatable.

Loveless demonstrates her knack for describing the traits of someone in a depressive state. The daily ennui and struggle that infects someone in mourning are captured in lines like “Around 11 am, burned the breakfast again, I don’t know what I was doing, something that I saw on TV, I need to get a clue.”

I can imagine these little details being pried from a daily dream journal that your therapist tells you to keep. “Longer” rests confidently in the middle of two genres, but its protagonist is uncomfortable with ambiguity.

She doesn’t feel at home in her hometown: “Maybe I should move away, cause I don’t know why I stay when it’s more than I can sustain, I want to wake up every day with you.”

Her voice is also a great accompaniment to her angst. I love listening to the way she spits and warbles out the words “shitty Indianapolis band” as if she’s just downed a shot of Bulleit.

It’s dark and dingy yet utterly captivating. She may be my spirit animal.

I was tempted to call this song a meditation on loss, but there is little meditation in “Valentine.”

In the parlance of our times, it seems like Apple is firmly “in her feelings.” Her aggressive and combative chants of  “you, you, you, you” are less contemplative and more ruminative.

She loves a little too hard and too strong. Apple is always alluring and breathtaking as a performer because of how intensely she seems to feel everything.

She seems to be singing through clenched fists and teeth, violently pounding away at her piano in a solitary studio. In addition to being a passionate feeler of feelings, she is also a possessor of a certain level of self-awareness.

She knows she’s frighteningly intense and her effort and commitment are unlikely to be matched by her beau. At the same time, her self-awareness seems to be the source of her anguish.

It’s the fact that she knows she’s a “tulip in a cup,” who “stands no chance of growing up” that tears her up inside. Self-knowledge is a curse sometimes and it sounds like Apple would much rather be blissfully ignorant.

This Toronto duo and Drake favorite are usually planted firmly in the realm of noirish, old-school yet futurist R&B sex ballad.

Singer Daniel Delay and producer Paul “Nineteen85” Jeffries portray themselves as sex-positive and devoted to love makin’ as a therapeutic exercise. Hormonal energy and transformative sex are their wheelhouse and reason for living but “Angela” is something of a black sheep on their 2016 album “Sept. 5th.”

DVSN songs usually take place in the sweaty heat of the moment, but here the duo tackles the aftermath. The song’s namesake seems to have just walked out the door and the singer seems to be curled up in the sheets contemplating her absence.

Delay seems to be licking his wounds and sulking while he frets over the titular ex leaving his side and entering a “world outside that’s less forgiving.” DVSN songs are never lyrically dense but rather gain their transformative power through Delay’s wrecked and forceful singing style.

On “Angela” he seems like he’s simultaneously on the verge of a tearful breakdown and moments away from asserting his confidence and swagger.

Unfortunately for Delay, it seems like his turnaround won’t have an audience. It seems like he’s singing into a void.

Whoever the display was intended for seems to be long gone and all that’s left is cavernous empty space.

“Your Type” by Carly Rae Jepsen

There is something so beautifully haunting in 80s style synthesizers. Synth-pop is my first choice when I need to hear some gorgeous melancholy.

This highlight from Carly Rae Jepsen’s retro sad pop masterpiece “Emotion” is a classic example of techno depression. The rhythmic, siren-like synths of “Your Type” seem to pulsate like a lighthouse that’s leading you to shipwreck.

The verses are firmly entrenched in a slow tempo while Jepsen processes her yearning for a would-be lover who doesn’t share her feelings. She’s utterly distraught and consumed by a debilitating inferiority complex.

No matter what Jepsen does, she seems to always be in the footsteps of that woman who “acts so perfectly.” Even though she can’t help but nurse this doomed infatuation she seems to have found some catharsis in the tune’s soaring chorus.

She may still be obsessed but at least she is assured she’s “not the type of girl for you.” She might be spurned, but there is some strange kind of peace and closure.

At least she knows who she is and where she stands.

Frank Ocean may not have the most powerful or dynamic singing voice but he is an expert heartstring tugger on this late-night reverie of unrequited love. If Lydia Loveless captures the sluggishness of the morning then Ocean captures the aimless, restless, sleepless nights of the unloved.

Ocean takes us to confession but we’re not greeted by a priest. Instead, Ocean is processing his emotions openly to a taxi driver on a lonely, pitiless drive to nowhere.

We have a slight hint of reverb and echo with a sonorous organ that evokes the open space acoustics of a temple or, yes, a church. We may be cramped in the backseat of a cab but Ocean reminds us that everywhere is God’s kingdom.

Soon we’re joined by forceful, marching drums and Ocean brings out his falsetto. His voice is not a powerful instrument but strength is not what makes this song special.

It’s the soul-bearing honesty and pain in the words that grab us. Everyone has felt the affection and effort we put into our infatuations boil down to little more than a “one-man cult and cyanide in a styrofoam cup.”

Ocean leaves us trapped and confined in a suffocating situation, but “Bad Religion” is an anthem nevertheless.