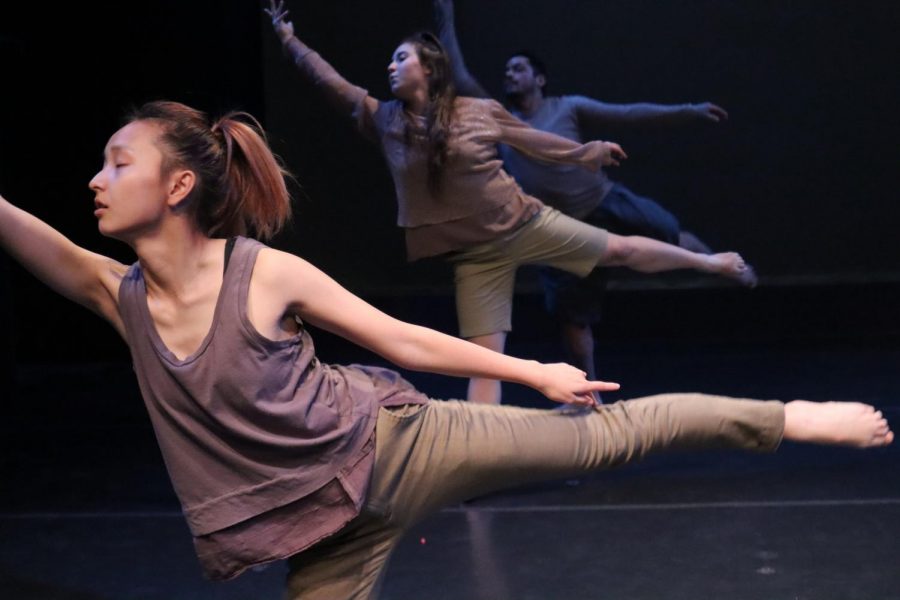 During rehearsal ahead of the first show of the “University Dance Company: Dance Site Fall 2019” performance series, Mikayla McGhee freed her fellow dancers from the drab confines of their black leotards.

During the piece the dancers are in-character as sex workers, dealing with the stigma of the profession. McGhee then unfurled a piece of her costume to reveal a billowing red dress, lending the routine color, an act that symbolized the decriminalization of sex work.

Behind her, the dark stage became backlit with a blue screen and the dancers moved through the spotlights in a free-flowing whirlwind of color and motion.

“In the beginning, you see our heads down and our hands are behind our backs like we’ve just been arrested,” said McGhee, a senior dance major at Sac State. “Our movements are very sad and then our dresses come out and we find our color and our freedom.”

Twenty-two Sac State students, including McGhee, are in the company and will perform in pieces that are based around a single word, “justice.”

“Some of the students will perform in only one piece and others will be in as many as two to three pieces. There are six pieces each with their own thematic idea tied to justice and what that word means,” said Director Philip Flickinger.

Dance Site Fall 2019 shows are choreographed by faculty and guest artists such as Bernard Brown. Brown has been a choreographer for shows such as Scott Joplin’s opera, “Treemonisha,” at the Skylark Opera Theatre in St. Paul, Minnesota.

According to Sac State’s Theatre and Dance website, Brown views dance as genre that “sparks dialogue and change within our communities.”

What McGhee loves about dance is the feeling of freedom she said it provides her.

“I enjoy being free in my movements, free in creativity,” McGhee said. “Dance has always been a way for me to speak without talking.”

“I’ve had to adjust certain movements and conserve my energy,” she said. “It’s been a process. Not a bad process, but a process. I’ve enjoyed it and I think he’s enjoyed it too.”

Rachel Angulo, a senior dance major performing in “University Dance Company: Dance Site Fall 2019”, said she grew up with tap dancing, which she learned from her mother.

“I’ve been a tapper my whole life,” she said. “I love it when your body creates the sound rather than the music. A lot of my pieces involve fast feet movement.”

Angulo came close to losing dance from her life when a hip injury threatened her ability to walk.

“When I was younger, my body grew too fast and my left hip couldn’t keep up with the growth and fell out of my acetabulum (hip socket),” she said. “I have a rod in my hip now that holds it all together.”

Medical professionals told Angulo that if she hadn’t noticed the pain as early as she did, she would have lost movement permanently on her left side.

“I’m definitely someone who will take the stairs if I can,” she said. “I’ll drive instead of walk. It doesn’t stop me from dancing. If anything it keeps me dancing.”

The shows will be running from Thursday to Saturday, each at 7 p.m. at Sac State’s University Theatre in Shasta Hall with an additional 2 p.m. matinee Saturday.

Tickets will be $18 for general audiences, $15 for students, faculty, and seniors and $12 for children ages 3 to 11. Tickets are available at the Hornet Ticket Office as well as the  Department of Theatre & Dance website.