Nishtha Madan distinguishes herself with 71.9 average in fall 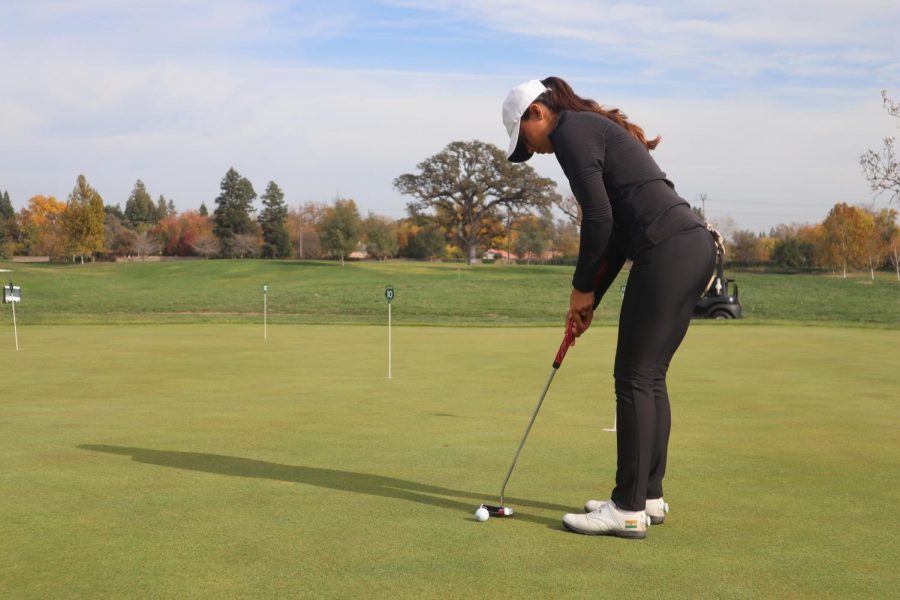 Nishtha Madan followed the path that her sister Astha Madan blazed for her, leaving India to join her older sister on the Sacramento State women’s golf team.

Astha Madan was entering her junior year at Sac State when her younger sister left India to join her. The two sisters had committed themselves to becoming scholarship-level players years before they had both committed to Sac State.

“I think it was my junior year of high school that I had verbally committed to Sac State,” Madan said.  “I kind of knew I was coming here because my sister was here already and my parents wanted both of us to be together.”

Madan said having her older sister in Sacramento made the transition easier, and that it didn’t take long for her to achieve individual distinction. In her freshman year, Madan recorded the sixth-best season scoring average in program history.

Madan also clinched her first collegiate win with a 2-under par score this past October in Sammamish, Washington.

“She knew everything about us and made the commitment to our program,” Sutherland said.”She does the right thing over and over again.”

“On the golf course she’s just so accurate,” senior golfer Amelia Hicks said. “It’s on the green, she’s so precise. It’s so pure to watch her play.”

While playing golf at Sac State was an easy transition for Madan, she said the hardest part about coming to the United States was adjusting to American food.

“I’ve never eaten cafeteria food,” Madan said. “In the dining commons for example, all they have is pretty much fast food and I don’t eat fast food.”

She found the best option for her was moving off-campus and cooking on her own. The senior said that has helped her manage nutrition as it pertains to her athletic performance.

“I like to know what is the best route for me to take in terms of every aspect to help my golf (game),” Madan said.

RELATED: Golf sisters thrive on the green since move from India

Now in her senior year, she has found a few American options she favors.

“Oh yeah, steak,” Madan said about foods she enjoys. “I love a good steak. Medium-rare with mashed potatoes and asparagus or something. I feel like that’s a very traditional American meal.”

Madan’s teammates understand her struggles to adjust to American food.

“If someone came to me and said, ‘Where do I take Nishtha for food,’ I would say she loves frozen yogurt,” Hicks said. “Oh my gosh, she loves Pinkberry. She could be full and I would say, ‘Do you want to go to Pinkberry?’ and she would say, ‘Yeah, let’s go.’”

Madan’s choice of pursuing a psychology major was also influenced by her golf game.

“I think one part of me took psych because I really enjoy the subject and another part of me took it to understand more about human nature and how I can apply that to sports,” Madan said.  “Because golf is such a mental sport, I feel like my background in psychology has facilitated my golfing in terms of really creating awareness about myself.”

According to her teammates, Madan is able to stay focused on the course amid adversity.

“She knows how to shake off bad holes really easily,” said Hicks. “When you play with her, you don’t know if she’s 3-under or 3-over.  She’s very good at not showing her emotions.”

Madan said she has enjoyed traveling throughout the United States with the Sac State women’s golf team and experiencing America’s diversity.

“Going from Hawaii to Virginia, it’s so different, even the culture,” Madan said. “I think Sac State has a very diverse campus, it is nice to see and interact with people from different backgrounds.”

During the off-season, Madan stays disciplined in preparation for the spring season and said she is excited that the team will be traveling to Florida and Mexico during 2020. Additionally, Madan said her spring academic schedule will lighten so she can hone in on golf.

“Every year I progressively reduce my scoring average, which is a good sign, as long as I’m getting better,” said Madan.

Madan said she is intent on pursuing golf professionally following her upcoming spring graduation, beginning with qualifying school held in Palm Springs next summer. Her sister Astha is currently on the European Tour.

Sutherland said Madan emerged from her sister’s shadow, but was never really in it.

“She’s matured as a person, golfer and student, consistent in effort and energy level,” Sutherland said. “The only frustration for Nish is not being at this level sooner.”

Sutherland said Madan’s international experience has prepared her for professional play, but that before she can advance to the next level, she needs to clean up some of her short game. Sutherland said he sees her playing on the Ladies Professional Golf Association tour in two to three years.

Madan has goals for her life beyond her golf career. She said the biggest goal she has is using the opportunities she received to give back.

“I feel like the first place I would do that is India, my home,” Madan said. “I feel if I can do something to help someone or set an example some way, I would love to be that person and create the culture of women in sports and encourage young girls to pick up sports and golf specifically, I think it’s a great sport.”