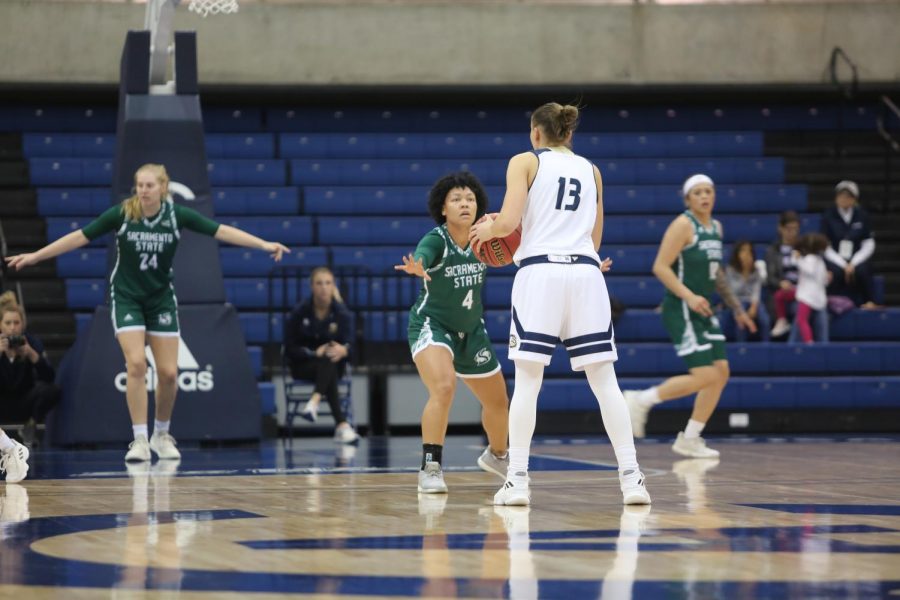 Sac State senior guard Camariah King guards UC Davis senior guard Katie Toole against the Aggies on Tuesday, Nov. 26 at The Pavilion. The Hornets lost 88-84 on the road at Seattle University on Friday.

Despite traveling 750 miles from campus, some of the Sacramento State women’s basketball team felt right at home for their road game against Seattle University on Friday.

Nicholas and King were met with cheers from the crowd when the starting lineups were introduced, but the support from friends and family wasn’t enough to get Sac State’s (1-5) season back on track, as they lost to Seattle (3-6) by a final score of 88-84.

Sophomore forward Tiana Johnson started in the frontcourt alongside Nicholas, giving the Hornets their biggest starting look of the season. Johnson is listed at 6-foot-2-inches and Nicholas is listed at 6-foot-3-inches, the two tallest players on the roster.

Senior guard Gabi Bade and sophomore guard Summer Menke rounded out the starting backcourt. Bade and Menke are the only two players to start every game for the Hornets this season.

Despite the size advantage and the hometown support, Sac State came out of the starting gates looking flat. The Hornets shot only 16.7% from the field, and for the first time all year failed to outscore their opponent in the first quarter.

The Redhawks pushed their lead to 22-10, but Sac State snapped out of their funk and improved their field goal shooting to 54.5% in the second quarter.

A 3-pointer from King at the three-minute mark tied the game at 29. A pair of free throws by Menke a few seconds later made it 31-29, giving the Hornets their first lead since the opening minutes of the game.

The half ended with a one point advantage for the Redhawks, 34-33. Seattle sophomore guard Courtney Murphy led all scorers with 14 points at the half.

The game stayed close until the Redhawks ripped off an 11-2 run at the end of the third quarter. That momentum carried over into the fourth quarter, and Sac State never recovered.

While Sac State kept their composure and fought hard to get back to a two-possession game in the closing seconds, the 88-84 final score was the closest margin they achieved across the last 13 minutes of the game.

Redhawks senior guard Kamira Sanders finished with a game-high 18 points. King was a bright spot for the Hornets, with a team-high 17 points and six assists.

Nicholas, who was named Big Sky Player of the Week after scoring a career-high 30 points against UC Davis last Wednesday, led all players with 11 rebounds and two blocks. However, she struggled offensively against Seattle, scoring only eight points.

The defeat at the hands of the Redhawks, who finished last season with a record of 3-27, is the latest in a series of frustrating loses for Sac State. The Hornets have now dropped four straight, and five out of six games in total to start the season.

Sac State has their next matchup on Saturday, Dec. 14, at the University of San Francisco.