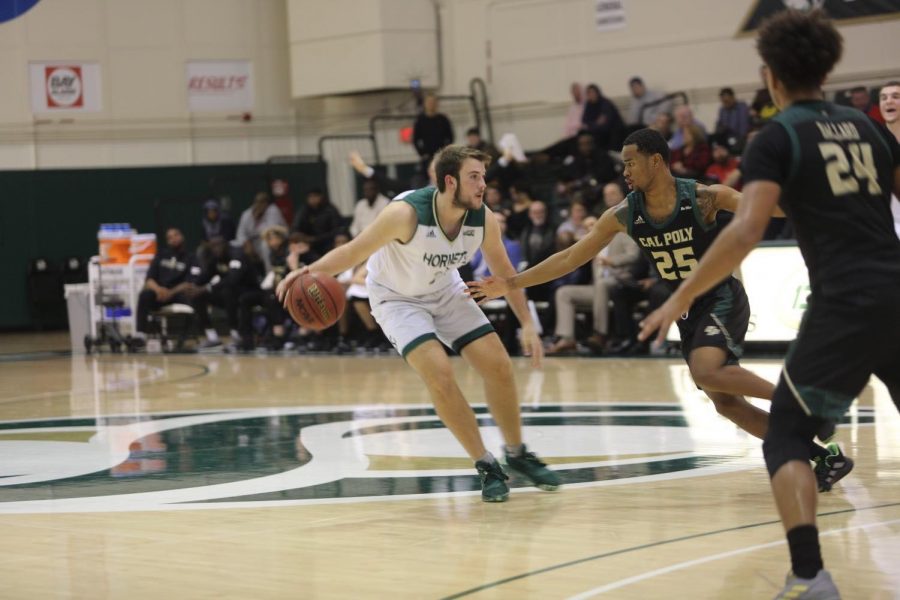 Sac State sophomore forward James Bridges dribbles in front of Cal Poly senior guard Jamal Smith on Wednesday, Dec. 18 at the Nest. The Hornets have started conference play 0-2 after a 52-50 loss to the University of Montana on Monday, Dec. 30.

The Hornets (7-4, 0-2 Big Sky), stayed in Montana after losing to Montana State 66-51 Saturday night in Bozeman and were looking to pick up their third win in 26 tries in Missoula at the University of Montana (6-7, 2-0)

Both teams started the game slowly on offense, combining for 5-24 shooting from the field in the first eight minutes of the half.

A jumper from junior forward Ethan Esposito gave the Hornets an early 7-5 lead with 12:46 left in the half.

Sac State entered the game ranked third in the nation in scoring defense, giving up just 53 points per game.

The teams continued the exchange shots for the next six minutes as Montana led 16-15 with 6:20 to play in the half.

The Hornets held the Grizzlies scoreless for over four minutes and lead 27-20 at halftime.

The Grizzlies escaped the entrapment and opened the second half with an 8-0 run to take a 28-27 lead four minutes into the half.

The Hornets again responded, this time with a 7-0 run to retake the lead after a layup and free throw from Fowler.

Fowler would finish the game with seven points and eight rebounds off the bench.

Sophomore guard James Bridges drilled a three with 58 seconds left in the game to give Sac State a 49-48 lead.

After a pair of made free throws gave the Grizzlies a 50-49 lead with 30 seconds to play, the Hornets got the ball back with a chance to win the game.

Senior guard Izayah Mauriohooho-Le’afa was fouled on a drive to the basket and awarded two free throws. The senior made one of two, tying the game at 50 with five seconds left.

The Grizzlies threw a long pass to half court, and Montana guard Kendal Manuel was fouled on a drive by Fowler with 2.5 seconds left on the clock.

Manuel made both free throws, and a late Hornets heave was no good as Montana beat Sac State 52-50.

Sac State returns to the Nest for their next game against Idaho State Saturday at 7:05 p.m.