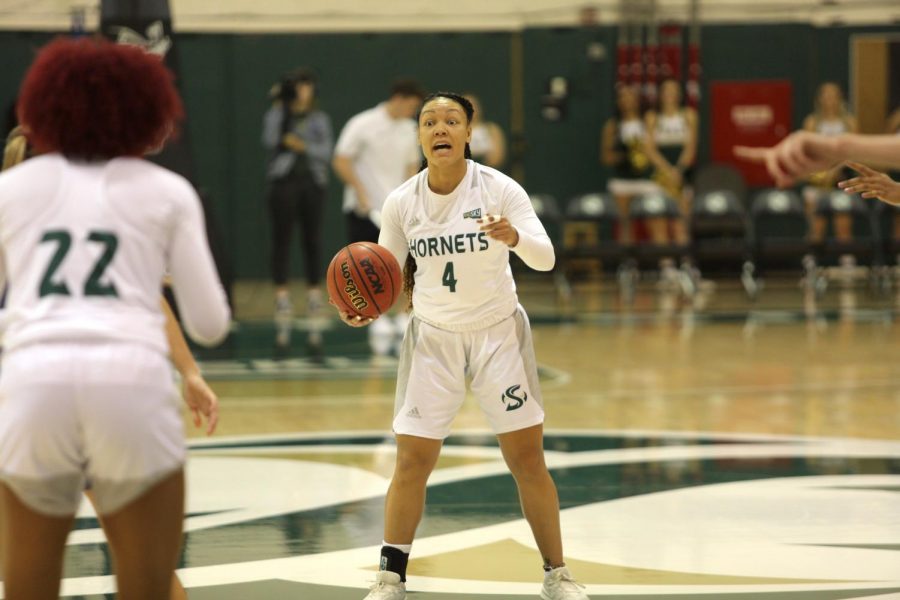 Sac State senior guard Camariah King calls out a play against Montana State on Saturday, Dec. 28 at the Nest. The Hornets were defeated by the Bobcats 85-48.

The Hornets (2-8, 0-1 Big Sky) returned home to the Nest following nine days off for Christmas, while the Bobcats (5-5, 1-0) came into the matchup looking to break a three-game losing streak.

“We started our best five players today,” said coach Bunky Harkleroad. “But that’s going to be determined by how we continue to play and practice.”

The Hornets got out to an early 7-3 lead two minutes into the game. That was the last time the Hornets would lead as the Bobcats went on a 12-0 run and closed the quarter with a 15-10 lead.

Sac State and MSU played a competitive second period as the Bobcats outscored the Hornets 14-9 to take a double-digit lead into halftime at 29-19.

The Bobcats’ early shooting struggles disappeared in the third quarter. MSU shot 12-24 from the field and made all seven of their free throw attempts. The Bobcats went on a 14-0 run to open the second half and stretch their lead to 24.

The Hornets had their best offensive period in the fourth as they scored 17 points. The Bobcats outscored Sac State 24-17 in the final period to win by 37 at 85-48.

“When you miss a box out, you turn the ball over, good teams make you pay,” Harkleroad said. “Montana State is a good team and made us pay for our mistakes.”

A big difference in the game was rebounding, as the Bobcats outrebounded the Hornets 59-37.

“Today’s game was the first day back after break and that was pretty obvious,” Nicholas said. “I think it was a starting point for us that we can only grow from here.”

For the Hornets, sophomore forward Tiana Johnson had a team-high 10 points and five rebounds off the bench. Nicholas and Menke each contributed seven points.

Sac State has yet to defeat a Division I opponent this season with their only wins coming against NAIA schools, Cal State Maritime and Pacific Union College.

The Hornets play next against the University of Montana at the Nest Monday with tip-off set for 7:05 p.m.