Athletics unable to answer how lockers were paid for 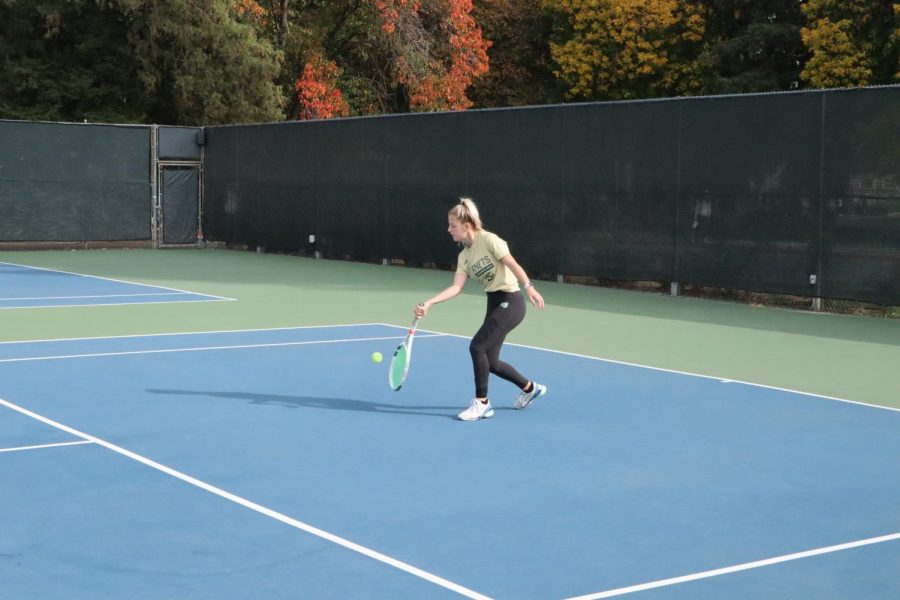 Sac State junior tennis player Jenna Dorian returns a serve during practice. The women's tennis team will be getting a new locker room in Yosemite Hall 169 for the team's 11 players.

The Sacramento State women’s tennis team recently generated a fundraiser on the Hornet Athletics website to bring in money for new lockers that had already been purchased.

The fundraiser was created to build the first-ever locker room for the women’s tennis program on Sac State’s campus. When finished, the room will occupy space in Yosemite Hall 169.

The team wrote on the fundraiser page, “We need your help to make the space truly special and one of a kind.”

While reaching out to Hornet Athletics, The State Hornet discovered that the lockers had been purchased simultaneously to the fundraiser being created.

“The lockers have been purchased,” said Robert Barsanti, Sac State assistant media relations director. “The fundraiser allows donors an opportunity for naming rights, as well as the ability to enhance the space with more than just simple lockers.”

Donors are able to purchase naming right with a $350 donation that the fundraiser claims will go towards purchasing the locker.

Since the lockers have been purchased, the State Hornet reached out for comment on the origin of the funds used to purchase the lockers. Hornet Athletics did not provide a clear answer and Barsanti claimed that neither he nor head coach Cami Hubbs know how the lockers were bought in advance.

There are 11 donors listed on the fundraiser page, including Hubbs who donated $200.

The Sac State women’s tennis team has failed to disclose any information regarding the purchase and where the funds came from. There has been no confirmation on whether the fundraiser was created to reimburse the unknown funds used to purchase the lockers in advance.

“The fundraiser started about a month ago,” Hubbs said. “We have received two lockers so far. The rest should arrive by January.”

Sac State’s tennis programs have been surrounded by ongoing investigations in recent years.

The State Hornet reported two players being ineligible to play due to such investigations back in 2017.

These investigations later led to a 3-year probation set on Sac State by the NCAA in 2018 for violating NCAA regulations.

According to the NCAA Division I Committee on Infractions, after the University did not renew the scholarships of two players, former Sac State Director of Tennis Bill Campbell provided or arranged for a booster to provide tuition for them.

The report has also suggested that the former director was supplying his students with housing arrangements and free tennis instruction at a facility off-campus.

The University, in response, self-imposed a $5,000 fine and a ban on international recruiting.

The morale of the team was low during 2017 when the investigations caused the team to miss out on the Big Sky Conference tournament. These controversies seem to have caused friction within the program, resulting in a lack of positive results in recent years.

The Sac State women’s tennis team starts their season on the road against Drake University on Jan. 17, 2020.