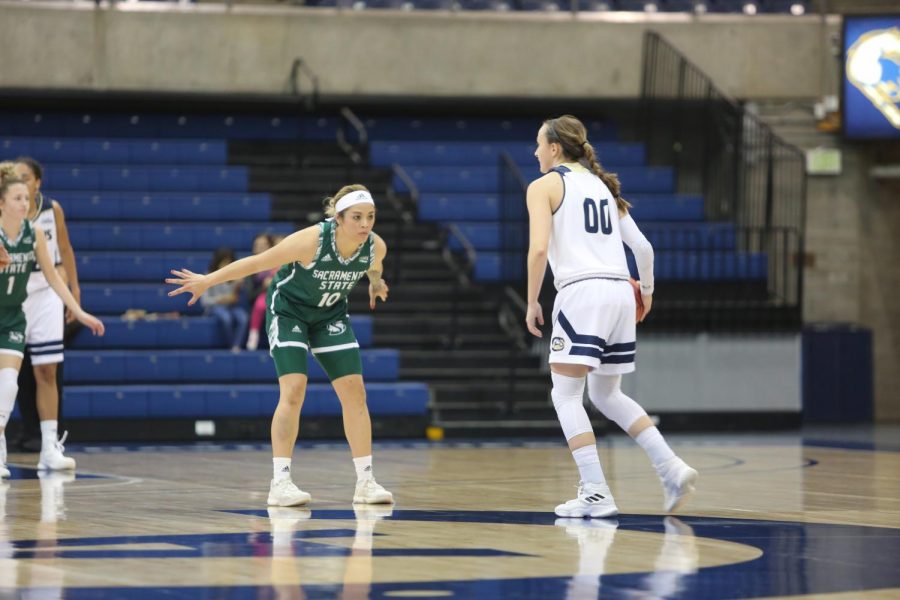 The Sacramento State women’s basketball team concluded a five-game road trip Saturday afternoon with an 87-82 loss at the University of San Francisco.

The Hornets (1-6) have not defeated the Dons (6-4) in San Francisco since 2010 and extended their losing streak to five games in a row overall against USF. With the win, the Dons increased their winning streak to four games while the Hornets are now on a five-game losing streak.

Sac State was aggressive in the first quarter, shooting 52%. After trailing 5-0 to begin the game, the Hornets doubled up the Dons with a 28-14 run to close the quarter with a nine-point lead. Senior guard Gabi Bade had a strong first period off the bench, scoring 11 points and converting on all three of her 3-point attempts.

The Hornets continued to dominate in the second quarter, extending their lead to 18 points with two minutes remaining in the half. However, the Dons went on a 9-0 run to close the quarter and seize momentum, chopping Sac State’s lead to single digits by the halftime buzzer at 51-42.

Sac State and USF played an even third quarter, as the Dons cut the Hornets’ lead to one possession midway through the period. Sac State was able to hold onto the lead and take a five-point lead into the fourth at 69-64.

The Hornets surrendered their lead with 7:24 remaining in the game and trailed for the first time since leading 15-13 with 3:36 left in the first quarter. The two teams battled back and forth for the next five minutes.

With two minutes remaining, senior forward Kennedy Nicholas made one of two free throws to give Sac State an 82-81 lead. That was the last point scored for the Hornets as the Dons closed the game on a 6-0 run to win 87-82.

Graduate forward Mikayla Williams led the way for the Dons with a double-double, scoring a game-high 29 points and grabbing 15 rebounds.

Sac State led for 29:17 of the 40-minute contest squandered an 18-point lead, and for the third game in a row, lost a winnable road game in crunch time.

The Hornets have not beaten a Division I team yet this season, with their only win coming against Cal State Maritime, an NAIA school.

The Hornets return home to the Nest on Tuesday with a tough matchup against Big Ten Conference school, The Ohio State University. The Buckeyes were supposed to play the Hornets last season in November but had to cancel and reschedule the game due to the Camp Fire.

Sac State will attempt to break their five-game losing streak and upset the Buckeyes on Tuesday night with tipoff set for 7:05 p.m.