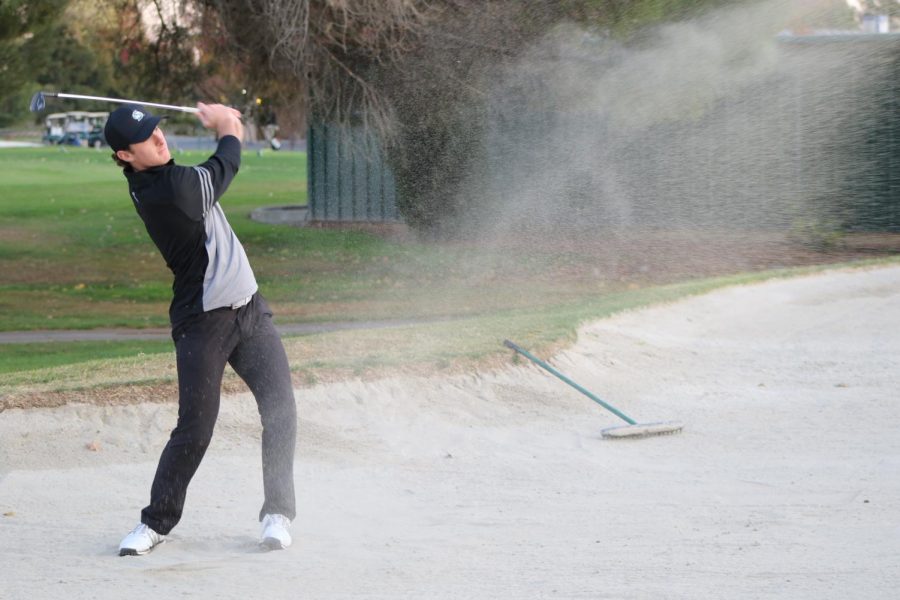 Sophomore golfer Ethan Davidson grew up in Southern California but knew after his first visit with Sacramento State’s men’s golf team that he was meant to be a Hornet.

Davidson, who hails from the San Fernando Valley, said he’s been playing golf since he was 16 months old. His father Gary Davidson, a former collegiate golfer at UC Santa Barbara, is the one that first taught him how to play.

“Golf was part of my life since I was walking,” Davidson said. “I was always playing golf, growing up I was playing all sports.”

Davidson acknowledged that the individual element of golf is what steered him away from some of the other sports he grew up playing, such as soccer and baseball.

“I felt like when I was playing team sports, I could do my part on the field and we could still lose a game,” he said. “But with golf, it’s on me. If I put in the work, I’ll get the results and I can see it.”

Davidson credits his father as being his biggest influence as a golfer. However, he also looks up to some players on the PGA Tour.

“I mean, how could you not look up to Tiger Woods? I’ve looked up to Tiger and Rory Mcllroy,” Davidson said. “Rory was always a huge guy for me because everyone always said I looked like him and I have a similar swing so I wanted to be like him. But Tiger was always the idol.”

Davidson had at least four different swing coaches growing up to help develop his game. Since 2012, he has been with Dan Martin.

Martin had high praise for his former junior golf student.

“Ethan has the DNA of a tour player, he doesn’t internalize his failures and he’s balanced in his approach to the game,” Martin said. “He has a very aggressive style of play and out of the hundreds of students I’ve had over the years, he’s top five in terms of work ethic.”

Davidson said he thinks driving is his strength and that over time, the mental game has become one of his strengths as well. The mental aspect of golf is of utmost importance to Davidson.

“I always had physical skills,” Davidson said. “But when I started learning about the mental side and how you have to act on the golf course and what you have to do to be the best you, that’s when I started playing better. I’d say it’s 70% mental and 30% physical game for sure.”

Despite his talent and accomplishments, Davidson admits that he has room for improvement in his overall game.

“We all have weaknesses, my wedge game, my short game around the greens and my putting could always use some work,” he said. “You can never get the ball close enough to the hole, you can always hit it closer, unless you’re making it all the time, but that’s not realistic.”

Davidson said each week during the season, he talks to Sac State men’s golf coach Kamden Brakel and his teammates to try to recap his performance in the last tournament and picks an aspect of his game to focus on for that given week in order to improve as a player.

Davidson had the lowest scoring average of anyone on the Sac State men’s golf team in the fall 2019 season.

“Ethan has tremendous physical ability and he brings competitiveness and a good attitude to the team,” Brakel said.

Davidson graduated from Calabasas High School in 2018, where he played varsity golf all four years.

However, it was a visit during the summer of 2017 where he made up his mind on coming to play for Sac State.

“I got a chance to practice with the team and I left the golf course that day saying ‘That’s where I’m going to school, that’s my team right there,’” Davidson said.

“Ethan is so much fun, he brings a very unique energy to the team and is very considerate of others,” Carr said. “We’re lucky to have a guy like him playing with us. He has a ton of natural talent and his potential is through the roof. He’s only 19 and he’s a really dangerous player at a young age.”

Davidson attributes part of his success to team camaraderie.

“I don’t think there’s a team as close as us in all of college golf and that’s huge,” he said. “I knew it from when I first played with them and that chemistry is unbeatable.”

Davidson gave credit to Brakel for a good team culture being established.

“Off the golf course I like to say that my coach is one of us, he knows our team chemistry is unmatched and he takes part in it,” Davidson said. “On the golf course, he’s hardworking and drives us to do everything we can day in and day out to win.”

Davidson knows his own individual success as a player will come with time and practice.

“It comes from hard work,” he said. “My dad always viewed it as if you work for it you’ll get it and I think everything comes back to that. Hard work as well as loving what you do, that’s what it comes down to.”