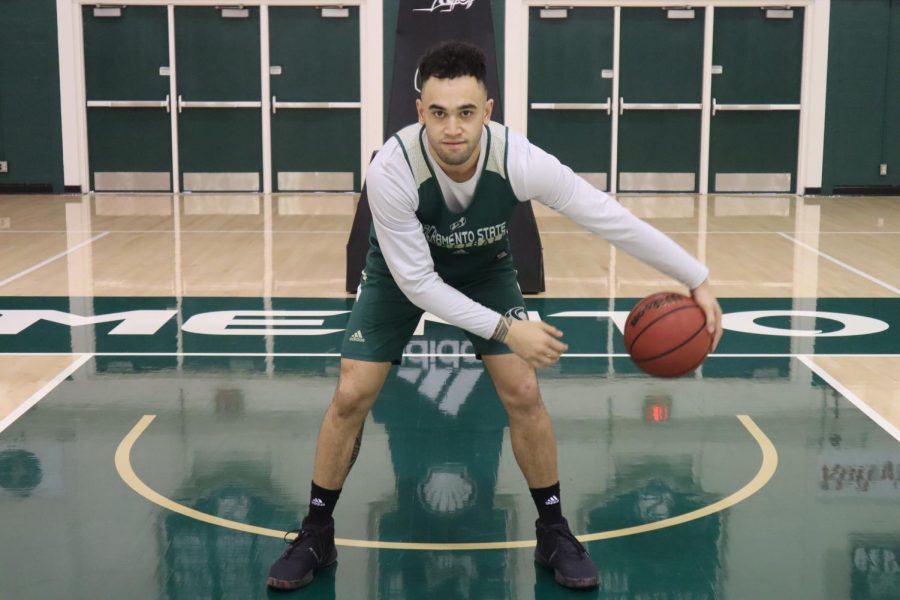 “It’s in my blood, I was born and raised in a basketball family,” Mauriohooho-Le’afa said.

Imagine playing for two basketball teams as a high schooler. Going to practice for your school team at either 6 a.m or after school. Then going straight to practice for a National Basketball League (NBL) team. That’s what Mauriohooho-Le’afa did for three years.

Mauriohooho-Le’afa spent four years playing professionally for the Wellington Saints NBL team but accepted no compensation to maintain his collegiate eligibility. Mauriohooho-Le’afa and the Saints won an NBL championship in 2014.

Rugby is a very popular sport in New Zealand that Mauriohooho-Le’afa played until he made a decision to focus on basketball full time.

“I definitely do like football now,” Mauriohooho-Le’afa said, comparing it to rugby. “Over the years I’ve grown to understand the roles (in football) and more players as we go on.”

In New Zealand, basketball isn’t as popular as rugby. However, Mauriohooho-Le’afa said since Oklahoma City Thunder center Steven Adams, who is from New Zealand, made it to the NBA, basketball has been the biggest growing sport in New Zealand and gotten more popular with many camps opening and youth players across the country trying to earn a scholarship for basketball.

In his young career, Mauriohooho-Le’afa has gained a lot of experience, including being selected for New Zealand’s national team in 2013 at 16-years-old, the youngest on the team. In 2015, he was selected to play for the New Zealand national team the Tall Blacks’ Olympic qualifying team and was the captain for the U-19 Junior Tall Blacks national team which represented New Zealand in a 3-on-3 tournament at the 2014 Summer Youth Olympic Games.

Mauriohooho-Le’afa attributes his success, inspiration and opportunity to his parents, who were both professional basketball players that won multiple championships and exposed him to a professional environment. Mauriohooho-Le’afa’s father, George Le’afa, coached his son for eight years during both high school and NBL play.

“That’s always going to be a tough situation to be put in,” Mauriohooho-Le’afa said about being the coach’s son. “I had to keep working hard, he’ll get on me for everything and anything. But it was all about the team first and when we play I’ll just be another player to him. But off the court, he’ll be my father again.”

Mauriohooho-Le’afa described being able to practice and play in the open court scrimmaging with and against his father as a “luxury,” noting that some players never get that opportunity.

“My favorite thing was being able to play basketball with my dad, I just see everything he’ll be doing and then I’ll translate it to my game,” Mauriohooho-Le’afa said. “He was a point guard so it was everything I was trying to be and I just wanted to exceed expectations. Just seeing the feelings they would get when they won championships, I just wanted to have that same emotion and feel the same things that they were feeling.”

“Ever since he picked up that ball, it has never stopped,” George Le’afa said.

“Sacramento, they say it’s a city of trees when I got here, it was just normal because there is a lot of green back home,” Mauriohooho-Le’afa said. “I was definitely a little hesitant, nervous and scared in my mind at the same time. I didn’t know what to expect, I was a kid coming to another country. But everyone in the locker room was like family, I could just feel the brotherhood.”

Mauriohooho-Le’afa said he has grown a lot as a man since moving to the states by having to provide for himself. It was tough on his parents letting their only child play thousands of miles away from home, and Mauriohooho-Le’afa himself was homesick at first transitioning to a new culture in the U.S. but Sacramento felt like another home eventually as he built a bond with his teammates.

Mauriohooho-Le’afa said his first workout at Sac State was “terrible.” He reflected that It could have been from being on a 13-hour flight and going straight to a workout, but at the time that wasn’t an excuse he was going to use, especially flying out with his mom all the way to Sacramento for the visit.

Katz, in his 12th season at Sac State, recalled what happened at the workout.

“We almost didn’t take him, it was a horrible workout,” Katz said. “I sat with his mom and said ‘I know we haven’t offered yet and we flew you out here, but I’m not too sure we’re going to offer you.’ I looked at those five tapes again and slept on it and the next day went with my gut and decided that it was just a bad workout.”

Senior forward Chibueze Jacobs has been teammates with Mauriohooho-Le’afa since his arrival to the states and has witnessed his growth as a player.

Jacobs added that Mauriohooho-Le’afa’s game has grown with him becoming more aggressive on the offensive end, but that he has always been a great defender.

George Le’afa said he is proud that his son’s basketball IQ has grown with his toughness and that Mauriohooho-Le’afa has way more poise then he had as a player.

Over four years, Mauriohooho-Le’afa has been a diverse player. He is able to shoot 3-pointers at 37%, being a playmaker with a total of 252 assists so far in his career and a top-notch defender, being a finalist last season for the Big Sky Defensive Player of the Year award.

Mauriohooho-Le’afa said his dream goal is to play in the NBA, but his overall goal is just to play professional basketball somewhere following his final season at Sac State.