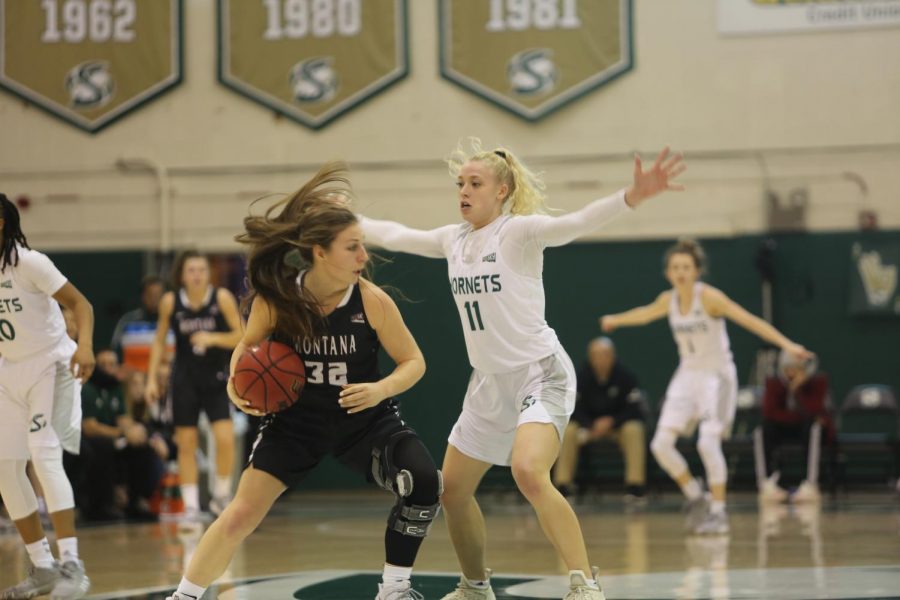 In the final game of the decade, the Sacramento State women’s basketball team lost 64-60 to the University of Montana in a close contest Monday night at the Nest.

The Lady Griz (7-4, 2-0 Big Sky Conference) led the Hornets (2-9, 0-2) for over 30 minutes of the 40-minute contest. However, Sac State remained close throughout and had a chance to win in the final minutes.

The Hornets scored the first basket of the game on a layup from senior guard Gabi Bade to take the lead. Montana responded with a 10-0 run while the Hornets struggled shooting.

Sac State continued to run their line-change-like substitutions in this contest with five players checking in and five players checking out multiple times during each quarter. For King in her first year with the Hornets, this is something new for her to adjust to after playing at the University of Nevada, Reno for three seasons.

“It’s totally different from what I’m used to,” King said. “(At) my old school I was out there the whole game, so it’s a lot different. We are playing (at) a faster pace than I have played before in the past. It works for us.”

Sac State and Montana battled back-and-forth in the third quarter as the Hornets outscored the Lady Griz 17-15 to trim Montana’s lead to six going into the fourth quarter. Sac State had its best quarter shooting in the third, making 36.8% of their shots.

Both teams struggled in the final quarter to make a field goal, as they both shot 30% or less. The Hornets and Lady Griz each had droughts of over three minutes without a made field goal. As a result, the game came down to free-throw shooting.

In the fourth quarter alone, Montana made 10-14 free throw attempts while Sac State only made 1-2. The Hornets outscored the Lady Griz 17-15 again but it was not enough.

Despite going the final 3:40 of the game without a made field goal, Montana defeated Sac State 64-60 to hand the Hornets’ their ninth loss of the season.

The Lady Griz won the game with rebounding and free-throw shooting. Montana outrebounded Sac State 51-33, the second consecutive game that the Hornets were outrebounded by double digits. The Lady Griz made 17-21 free throw attempts, while Sac State converted 4-12.

“I think this conference is very physical,” King said about the Big Sky. “I think that kinda hurt us our last game against Montana State. We kind of let them hit us before we hit them. So that was one of the key things we were working on in practice yesterday and I think it showed today.”

Montana was led to the win by senior forward Emma Stockholm who led all scorers with 21 points while adding eight rebounds. Sophomore forward Abby Anderson had nearly identical stats as her teammate with 20 points and eight rebounds.

“I’m so proud of her. She needed to have a really good game,” Nicholas said of King. “Going into conference play, the Big Sky is a lot different than Nevada’s conference. So I’m excited for her to really have that footing under her. We’re always looking for her to shoot more threes when her feet are set.”

Sac State has yet to defeat a Division I opponent this season with their only wins coming against NAIA schools, Cal State Maritime and Pacific Union College.

The Hornets now go on a three-game road trip across the Big Sky and will not return home to the Nest until Jan. 16.

Sac State plays next on the road at Reed Gym against Idaho State on Saturday at 1:05 p.m.