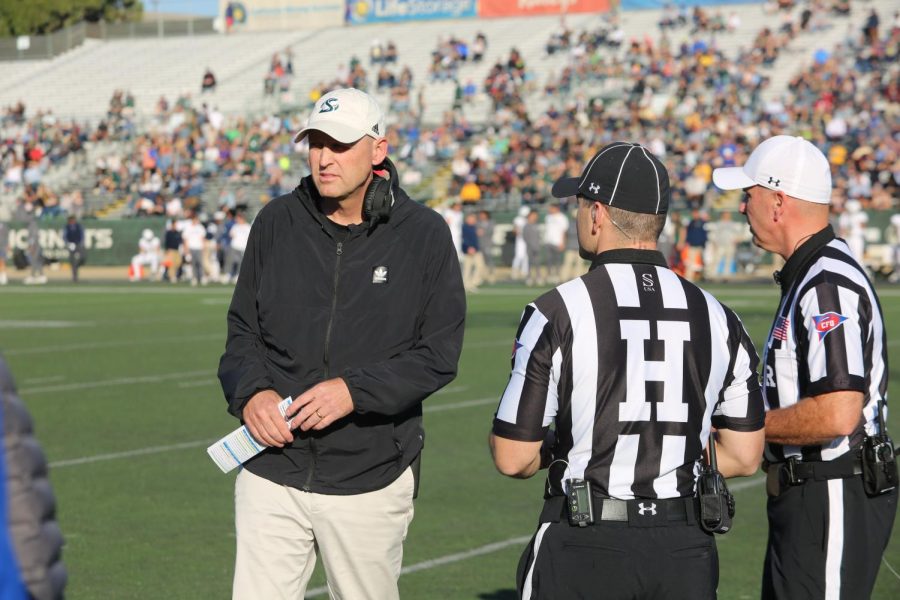 Sac State head coach Troy Taylor chats with the officials during a match against UC Davis on Saturday, Nov. 23 at Hornet Stadium. Taylor was named FCS Coach of the Year on Thursday.

Sacramento State football head coach Troy Taylor was named the winner of the Eddie Robinson Award on Thursday, the award for the Football Championship Subdivision (FCS) Coach of the Year.

Taylor lead the Hornets to a 9-4 overall record, a share of the Big Sky Championship and the school’s first playoff berth in its Division I history during the 2019 season, his first as head coach.

The season ended with a 42-28 upset loss to Austin Peay State University in the second round of the FCS playoffs.

“I’m honored to be chosen as the Eddie Robinson Award winner,” Taylor told Hornet Athletics. “The success we had this season at Sacramento State is due to the contribution of many administrators, support staff, coaches and, of course, our incredibly committed and resilient players. I accept this award on behalf of all those involved that have made this season a success.”

Taylor was signed in December 2018 to a seven-year contract after spending the last two years as an offensive coordinator for the University of Utah and was tasked with turning around a program that finished 2-8 in 2018 and had fired former head coach Jody Sears.

Taylor is the first Sac State coach and third Big Sky coach to win the award after Montana coach Joe Glenn in 2000 and UC Davis head coach Dan Hawkins in 2018.