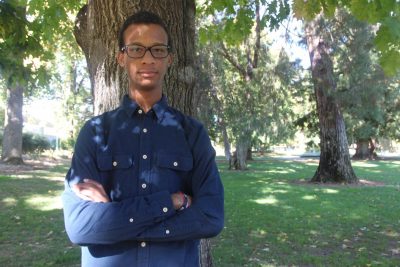 Political science major Floyd Johnson II, president emeritus of the Sac State College Republicans. Johnson was involved in an altercation with Sac State student Keaton Hill on Friday that was filmed and went viral on twitter.

The fight began after the two exited class. Hill was confronted by Johnson and his friend Henry Seufert due to arguments on Facebook between Johnson and Hill, according to Johnson.

Kaitlin Bennett, a conservative social media personality, posted a video of the altercation that Johnson filmed to Twitter.

This deranged leftist and LGBT activist named Keaton Hill assaulted and threatened to kill @FJtheDeuce, a black conservative at Sacramento State. This is reportedly the 2nd time Keaton has violently attacked college Republicans at @sacstate. pic.twitter.com/7MtvF5IqCe

When Hill breaks out of Seufert’s hold, he knocks Johnson’s phone out of his hand, after which Johnson is heard saying “that is not okay.”

Hill then walks off and a woman is seen asking Johnson and Seufert if they are okay and telling Johnson he can file a report, which Johnson replies “I know, yeah.”

“I apologize for lunging at Floyd’s phone,” Hill said Friday evening. “Although I strongly emphasize that it was not without provocation.”

The Sac State Police then arrived and took a report. Hill and Johnson have both claimed to have filed reports with the Office of Student Conduct as well.

“I just want the dude to get help, basically, but if it comes to it I will press charges,” Johnson said.

President Robert Nelsen addressed the altercation that happened on campus in an email sent to the Sac State community Friday evening.

“I am deeply disturbed and appalled to learn that there was a fistfight on campus today between students,” Nelsen said. “Today’s incident in no way reflects Sacramento State’s values. Violence on our campus will not be tolerated.”

UPDATE: The original headline for this story cited the description of the event as described in Sac State President Robert Nelsen’s SacSend email. After further reporting,  we have revised the headline to more accurately reflect what transpired. We will continue to update this story as more information becomes available.