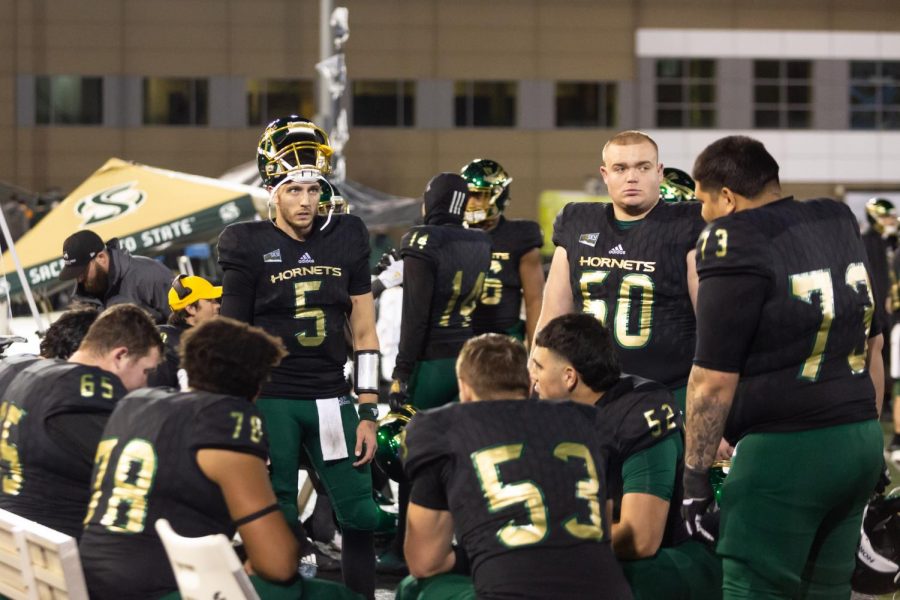 Sac State junior quarterback Kevin Thomson (5) and his teammates watch the clock wind down to its last 10 seconds of a loss against Austin Peay on Saturday, Dec. 7 at Hornet Stadium. The Hornets lost to the Governors 42-28 in the second round of the FCS Playoffs.

Just as quickly as it started, the playoff run for Sacramento State’s football team was over after a 42-28 loss to Austin Peay State University in the second round of the FCS playoffs on Saturday night.

The Hornets (9-4) were coming off a bye week after being named the No. 4 seed in the FCS playoff bracket. Austin Peay (11-3) entered as the Ohio Valley Conference co-champions and had won their opening game against Furman 42-6 last Saturday.

The Hornets struggled to get any offense going in the first quarter, eventually putting up 13 yards of total offense and punting the ball three times.

Austin Peay continued the scoring with Craig finding junior wide receiver Baniko Harley from three yards out for a touchdown on their next drive. A surprise onside kick attempt on the ensuing kickoff caught the Hornets sleeping as the Governors recovered it and got another possession.

“We typically just kind of fair catch the ball anyway so there’s really no reason for us to leave the front line,” Taylor said. “But credit to them. Great game planning. That was a huge play. They ended up scoring on that drive, so it was big.”

Austin Peay took advantage of this possession with Harley rushing on fourth and one up the middle for a 45-yard touchdown, making it 21-0 in the first quarter.

Things didn’t get much better for Sac State in the second quarter but they were given a chance to turn the tide after Sac State senior defensive back Marcus Bruce intercepted Craig and returned it to the Austin Peay 35 yard line. However, the offense stalled out and the Hornets turned the ball over on downs in the red zone.

With no further scoring in the second quarter, the game went to halftime with the Governors shutting out Sac State 21-0.

Austin Peay head coach Mark Hudspeth said that the defensive performance in the first half may have been what won them the game.

“I don’t know if we could have played a better first half of defense if we tried,” Hudspeth said. “We had two critical goal line stands, one where they went for it on fourth down and didn’t make it, and one where they ended up trying a short field goal and missed it.

“That was 14 points that might’ve been the difference. So an incredible effort by (sophomore linebacker) Jack (McDonald) right here and these defensive players on our side of the ball.”

The Hornets drove down to the seven yard line on the opening drive of the second half but didn’t get any points as senior kicker Devon Medeiros missed a 24-yard field goal. Austin Peay capitalized on the miss with senior running back Kentel Williams scoring on a one-yard rush.

Junior QB Kevin Thomson finally put Sac State on the board with a one-yard touchdown rush midway through the third quarter to make it 28-7. However, the Governors wasted no time in responding with Craig taking off for an 18-yard touchdown run.

Thomson got another rushing touchdown with just over a minute left in the third quarter making it 35-14 going into the final 12 minutes.

Harley got his third touchdown of the day on a two-yard rush as Austin Peay broke the 40-point barrier. Thomson got his first passing touchdown of the night by connecting with senior WR Isaiah Bailey from 20 yards out later in the quarter.

He would find Bailey again for a five-yard touchdown with just under three minutes left, but by then it was too late for Sac State to mount a comeback. This would prove to be the final score of the game as Austin Peay won 42-28.

Taylor said that after the two late scores, he felt like a comeback was still possible.

“I thought we had a chance there at the end and I never felt like the game was over,” Taylor said. “I liked that our guys battled back. That was good. But you know, (we’re) disappointed. Obviously, we didn’t play our best.”

Thomson said that despite the disappointing loss, he still had plenty to be thankful for this season.

“Believing in me, the quarterback that gets banged up every year, but they still have faith in me. They had faith that I was gonna make it through the year and compete.”

“In the grand scheme of things, I’m just very thankful for this season.”

Senior defensive back Caelan Barnes said after playing his last game as a Hornet that he was proud to have stayed and helped shape the team.

“I’m from Sacramento,” Barnes said. “Just being able to be a part of something special, building this foundation, bringing a Big Sky Championship to this university and to Sacramento is something I’ll never forget. I’m just thankful to be a part of this and I’m glad I stayed here.”

The Hornets finish the season with a 9-4 overall record, including a 7-1 conference record as co-Big Sky Champions.