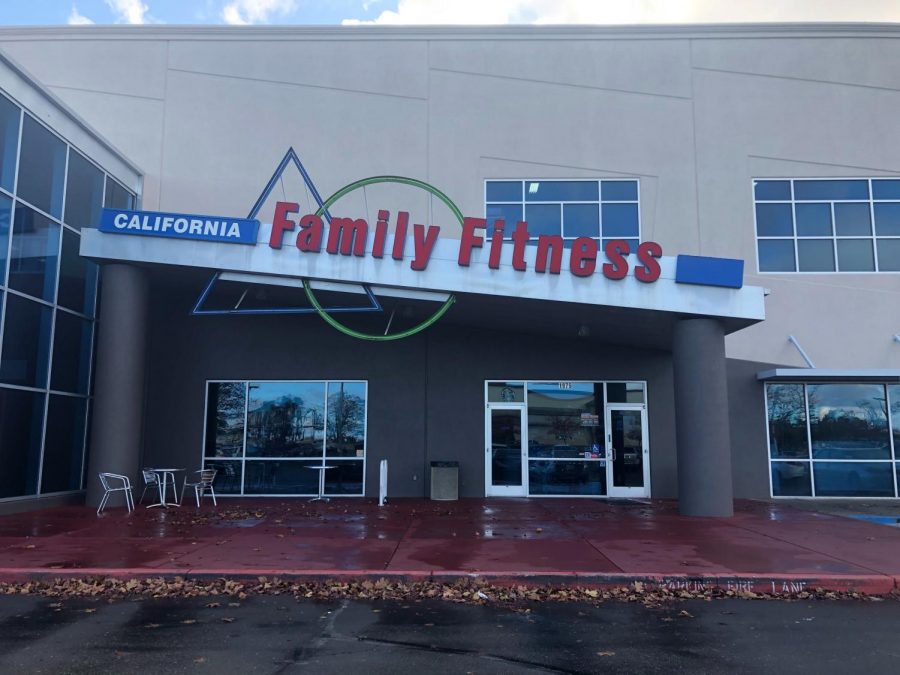 A Cal Fit building on Zinfadel Road in Rancho Cordova. Cal Fit has tabled at Sac State, but SO&L announced Friday that they are no longer allowed to table on campus as a vendor.

Sacramento State computer science major Alex Nguyen was catching up on his emails after a late night of homework when he received a notification that he says is still branded in his mind.

Nguyen had just received an email from California Family Fitness, a Sacramento-area gym, notifying him he would have to pay a $300 cancellation fee.

“I saw the email and my heart sank,” Nguyen said. “I started sweating. I got major anxiety thinking about what to do because I’m just a college student. How am I going to pay for such a ridiculous fee?”

Cal Fit is one of the most popular gyms in the Sacramento region. According to Michelle McCauley, Cal Fit director of marketing, the gym has a “strong positive partnership with (Sac State.)”

“We value our partnership with the university not only as a vendor on campus, but (as a) previous sponsor to the athletics program and a local business who employs many alumni and current students,” McCauley said.

Until Friday, Cal Fit had a table right in front of the University Library, where it was allowed to recruit new members. Now, Student Organizations & Leadership says Cal Fit is no longer permitted to table as a vendor at Sac State.

SO&L Interim Director Nicki Croly said the removal was “due to the complaints (SO&L) received and the unprofessional behavior of some (Cal Fit) employees to (Sac State’s) campus community members.”

According to the letter of agreement between Cal Fit and SO&L sent to The State Hornet, the latest contract between the two stipulated that Cal Fit pay a $114 daily fee in order to table on campus.

Excerpt from the letter of agreement sent to Randy Jones of Cal Fit from SO&L administrative analyst Gwen Anderson.

“We are unaware of California Family Fitness not being allowed (to table) as a vendor on campus,” McCauley said in an email when asked about SO&L’s decision. “We have paid through December.”

Nguyen was standing outside the library the day before his 18th birthday, Oct. 26, when Cal Fit sales manager Randy Jones waved him down. After Jones rushed him through the fine print and assured him he could cancel any time, Nguyen signed what he thought was a one-month free trial contract, he said.

According to McCauley, Cal Fit’s membership policy includes acknowledging and signing a form that indicates prospective members are entering a 12-month contract with Cal Fit. A membership is not processed until the contract acknowledgement is signed, McCauley said.

“We have confirmed that the student mentioned in the article did sign the attached acknowledgement in addition to the contractual membership agreement,” McCauley said in an email Monday. 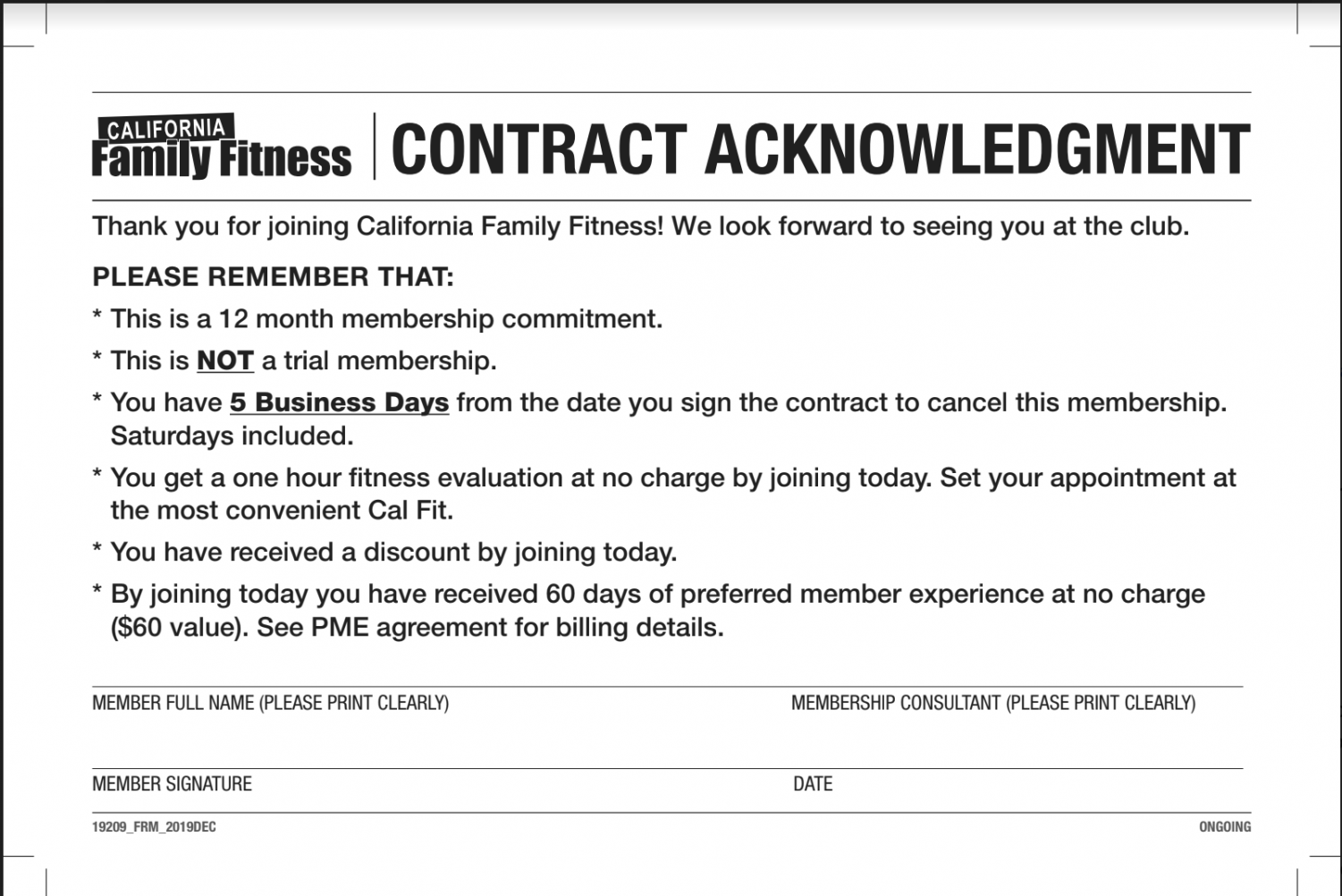 “Apparently I did,” Nguyen said in response to McCauley’s claim of his signing of the contract acknowledgement. “But looking back on my experience, I don’t remember even seeing this portion of the contract, as the salesperson rushed me to simply sign and not read the fine print.”

Convinced the cancellation process would be easy, Nguyen said he continued on with his day. When he discovered he couldn’t cancel his membership online, he went to a branch, where he was “shooed away with a piece of paper.”

That night, he received the email notifying him of the cancellation fee. According to the email, what Nguyen had actually signed up for was a one-year membership, and because he hadn’t canceled within five days of signing up and had completed zero months of his “full term,” he needed to pay $300.

“In no way, shape or form was that ever mentioned by the salesperson himself,” Nguyen said. “That’s the predicament I’m in right now.”

“We were glad to refund this student’s memberships, given the misunderstanding,” McCauley said.

Nguyen’s experience and his confusion at the cancellation fee is not unique. Other students have also reported experiencing this type of confusion from Cal Fit tabling on campus.

A first-year international student, who requested to remain anonymous out of fear of retribution, was walking by the library when he says Jones grabbed his arm and pulled him into the Cal Fit campus booth.

According to McCauley, Cal Fit representatives “follow a strict protocol when tabling at all university campuses.”

“We adhere to 10 feet radius of the booth set up,” McCauley said. “All prospective members engage with us first, prior to any conversation being had.”

Just like Nguyen, the student says Jones used aggressive sales tactics, and even told him he was a member of The WELL.

The WELL is Sac State’s very own on-campus gym, funded by student fees. This semester, registration fees included a mandatory $126 for student health and counseling services and $393 for the University Union/Well.

The student paid the $1 fee requested of him to sign up for the 1-month free trial, handing over his banking information.

When asked whether he thinks his status as an international student played a factor in his experience with Cal Fit, the student said yes.

“I think yes, because I’m not as familiar as I could be with the language,” the student said.

Some time later, the student received the same email Nguyen received about the $300 cancellation fee.

At the time of publication Jones had not responded to The State Hornet’s request for comment regarding his involvement in these incidents and Cal Fit being removed as a vendor from campus. 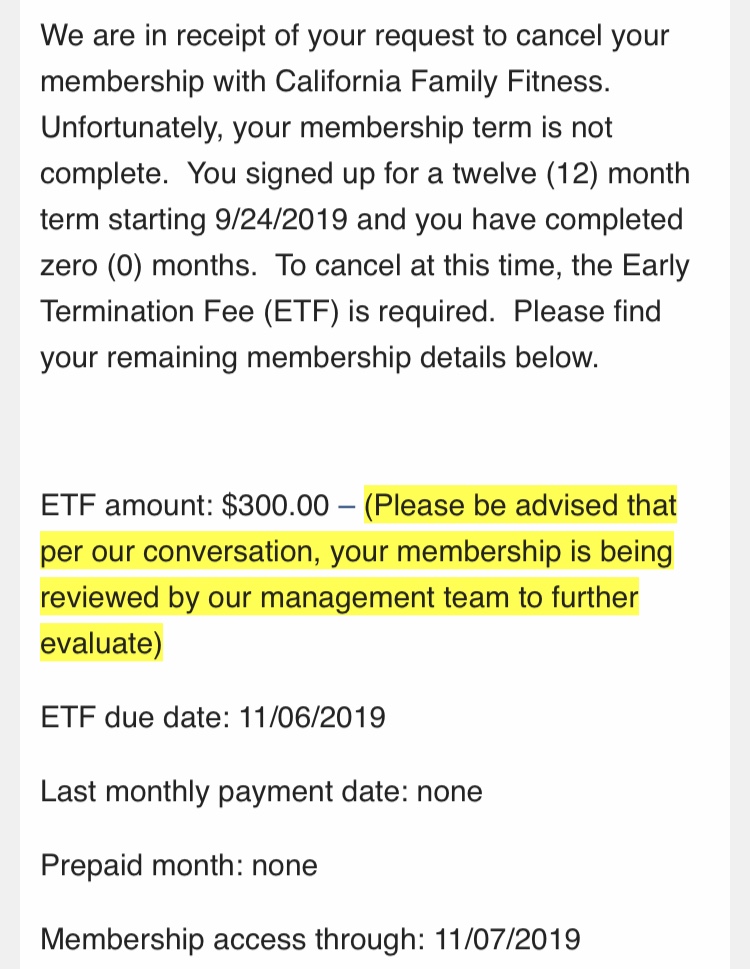 On Oct. 15, Chris Patterson, an adjunct faculty member in the Communication Studies Department, noticed that this same international student in his class — whom Patterson said is normally in a great mood and cheerful — was “despondent, closed off, and appeared to be struggling with something.”

After class, the student told him what had happened with Cal Fit. Patterson took matters into his own hands.

“I was shocked and taken aback by the story,” Patterson said in an email detailing the situation to SO&L. “I was angry that someone would seemingly take advantage of anyone, let alone an international student. He did not sleep all weekend, he closed his bank account for fear of an unauthorized electronic funds transfer by California Family Fitness, and with all the stress of his experience, his academics have suffered.”

Patterson and the student returned to the Cal Fit booth. Jones was not present and the representatives that were, were of little help.

After visiting multiple campus departments and being redirected, they found themselves at the SO&L office, where they met with SO&L Administrative Analyst Gwen Anderson and detailed the incident.

According to correspondence between Anderson and Patterson sent to The State Hornet, SO&L met with Cal Fit to address the concerns and some time later, the student was notified he would not be charged the cancellation fee.

On Oct. 22, Patterson was informed that a male employee (not Jones) who had called him a “douchebag” the second time he and his student walked past the booth, would not be allowed on campus. Cal Fit as an organization was fine to return until SO&L’s decision Friday.

Patterson and Nguyen responded similarly to the news of Cal Fit no longer being allowed to table on campus.

Patterson said that despite not knowing the exact reason behind SO&L’s decision to remove Cal Fit as a vendor, he is glad Cal Fit will no longer operate on campus.

“I’d like to think that it is because someone cared about a student, and cared about an international student, especially,” Patterson said in an email. “And that eventually the university realized they were putting students in harm’s way by having an organization on campus which seems to target folks who are at an information disadvantage — which seems counter to our mission as an educational institution.”

“In the end, this problem could have been resolved months ago if the powers that be picked to fight for the students rather than budgetary concerns, business relationships and property supporting programs the campus already has and for which students already pay a lot of money,” Patterson said.

“I’m glad that the school chose to make the right decision and kick them off campus,” Nguyen said. “They were definitely being more of a hindrance than being helpful to students, which is what the school should try to aim for when letting businesses advertise.”