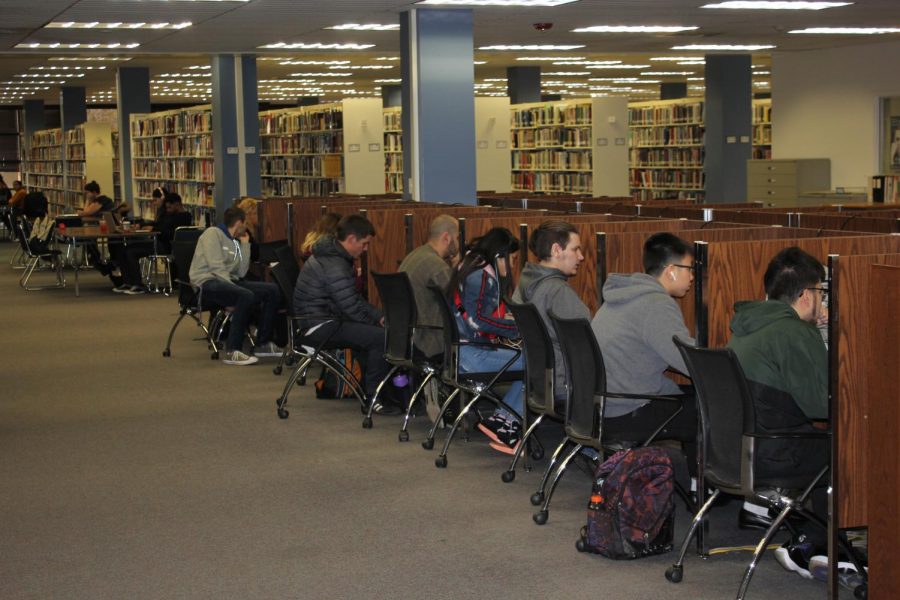 Students studying the week before finals in the Sac State Library. Next year, students may no longer have access to the updated Elsevier scientific journal database as the CSU system is renegotiating their contract with the company due to the high cost.

Sacramento State and the California State University system are currently in ongoing negotiations with Elsevier, a scholarly journal publishing company that licenses the ScienceDirect database to the CSU.

The CSU’s current contract with Elsevier terminates at the end of the year.

The CSU system is considering terminating its relationship with Elsevier because of the huge revenue and profit margin earnings Elsevier makes from their business as well as Elsevier not being flexible on open access for articles by CSU professors, said Amy Kautzman, dean and director of the Sac State Library.

“Open access means that the cost of publishing an article is covered up front, but once the article is published, it is made available to anyone to read for free,” said Ivy Anderson, associate executive director of the University of California’s California Digital Library.

According to data published by the Massachusetts Institute of Technology, Elsevier’s parent company RELX had revenue earnings of $9.8 billion and a profit margin of 31.3% in 2018.

Kautzman said she believes the earnings Elsevier makes are unjustified because they take advantage of faculty labor that is mostly paid by government funds through taxpayers.

“Our faculty that we pay a salary to, state money, are the ones who write the articles,” Kautzman said. “Other faculty are paid to peer review it to make sure it is factual… then other faculty are on the editorial boards, so all this is faculty labor.”

“If they don’t play nice with us, if they don’t respect where we are in the marketplace, we may have to turn our back on them,” Kautzman said. “Because that’s the only way we can have a successful negotiation if you’re willing to walk away. Nobody wants to walk away. “

Elsevier and its databases are meant to “help institutions and professionals advance healthcare, open science and improve performance for the benefit of humanity” according to their website.

“They are one of five major for-profit companies,” Kautzman said about Elsevier. “There are publishers who are greedy and that’s what we are pushing back on.”

RELX, Taylor & Francis, Springer, Wiley-Blackwell and SAGE own about half of all scientific publications.

The State Hornet reached out to Elsevier’s vice president of communications Tom Reller who sent a link to an Elsevier FAQ shortlist where the company claims the costs of its products are below industry averages.

The increasing cost of ScienceDirect means there is less money to spend on other essential library items: books, magazines,  furniture and operating costs.

Rosemary Vang, a biology major, said she can’t determine ScienceDirect’s usefulness because she doesn’t use it but said that if the money is freed it should be used to improve the Wi-Fi and printers.

Kathy Magana, a nutrition major, said she would use the money to update the layout of the library.

“You can obviously see it’s been a while since there have been some things done to it,” Magana said.

If the CSU system decides to drop Elsevier’s services, they will be following the UC’s footsteps. The UC let its contract expire with Elsevier on Dec. 31, 2018.

Jeff Mackie-Mason, UC Berkeley’s university librarian and an economics professor, said the UCs decided not to renew with Elsevier unless Elsevier met the UC’s goals of reducing costs, making all UC research open access and an integrated agreement that included access to Elsevier’s journals.

Mackie-Mason said Elsevier was not willing to publish all UC research as open access unless the universities paid more than the $11 million they were paying under the last contract.

Much of the faculty and students at UC Berkeley have adapted to finding new ways to access the articles, Mackie-Mason said.

“It’s certainly meant a change in how our researchers find articles… such as searching for open access versions or placing interlibrary loan requests,” Mackie-Mason said.

Anderson said the UC system has reached a transformative agreement with Cambridge University Press that allows all UC-authored articles to be published under open access.

“These agreements are called ‘transformative’ because they represent a step toward transforming the entire scholarly publishing system to open access… with a permanent end to paywalls,” Anderson said.

Kautzman encouraged faculty to explore open access. Kautzman said that if the CSU does not reach an agreement with Elsevier and allows the contract to expire, students and faculty would still have access to ScienceDirect articles, but the CSU’s database will no longer be updated with current articles.