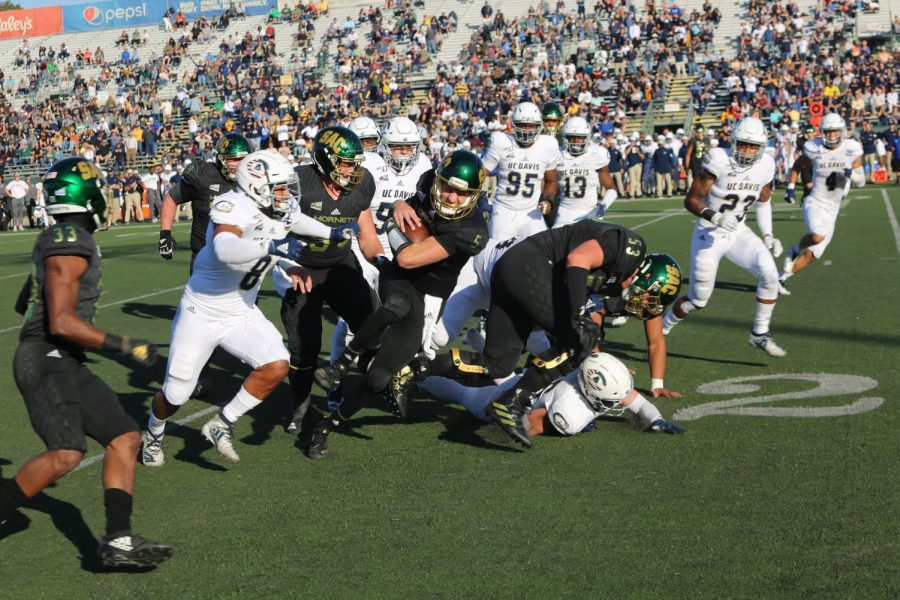 Sac State junior quarterback Kevin Thomson rushes for a first down against UC Davis on Saturday, Nov. 23 at Hornet Stadium. The No. 4 Hornets host the second round of the FCS Playoffs against Austin Peay on Saturday at 6 p.m.

The Sacramento State football team is focused on tuning out the noise and remaining focused on the next game ahead of the team’s first-ever FCS Playoff game against Austin Peay State University.

The Hornets were seeded No. 4 in the FCS playoff bracket following a 9-3 regular season, including going 7-1 in Big Sky play and winning a share of the conference title. Sac State was on a bye last week while Austin Peay beat Furman 42-6 in the first round.

Head coach Troy Taylor said the bye week allowed the team and coaches to get some much needed rest ahead of the game.

“We got some work done early in the week and then we gave our players some time off, and our coaches too, just to kind of resharpen the blade and get refreshed and recover,” Taylor said. “They came back ready to go. Had a great practice this weekend and (Tuesday). We’re kind of zeroing in on game day.”

The Governors come into this game with a 10-3 overall record, going 7-1 in league play and winning the Ohio Valley Conference and its automatic playoff berth.

Taylor said despite not having much direct information on a non-conference rival, the team has watched plenty of film to study the Governors.

“Just like we do (for) everybody, it’s just a game tape,” Taylor said. “We’ve looked at pretty much their whole season. Really clear that they’re an incredibly explosive team, very athletic, very well-coached. They’re a great football team. We’re gonna need to play our best.”

“We’ve looked at pretty much their whole season. And really clear that they’re an incredibly explosive team.”@coachTaylorsac talks about the opposition and being prepared ahead of Saturday’s FCS playoff game against Austin Peay. @SH_Sports pic.twitter.com/qRZlTw8ASw

“They fly around on defense,” Thomson said. “They have really good athletes. They’re going to test you, they’re going to challenge you one-on-one. So you just got to win when you have those opportunities in your one-on-one matchups and just try to be the better football player on that play.”

With the team enjoying its best season in school history, Thomson says there is no added pressure from the playoffs or from people outside the locker room.

“Coach Taylor’s big thing is living in the moment and we’re taking it one day at a time, one practice at a time.”@KevinThomsonX talks about not letting in outside noise and not adding any extra pressure ahead of the teams FCS playoff game against Austin Peay. @SH_Sports pic.twitter.com/BqvUxuHdmG

The Hornets play Austin Peay Saturday at 6 p.m. at Hornet Stadium and the game will be televised on ESPN3.