OPINION: Women athletes should receive the same treatment as men 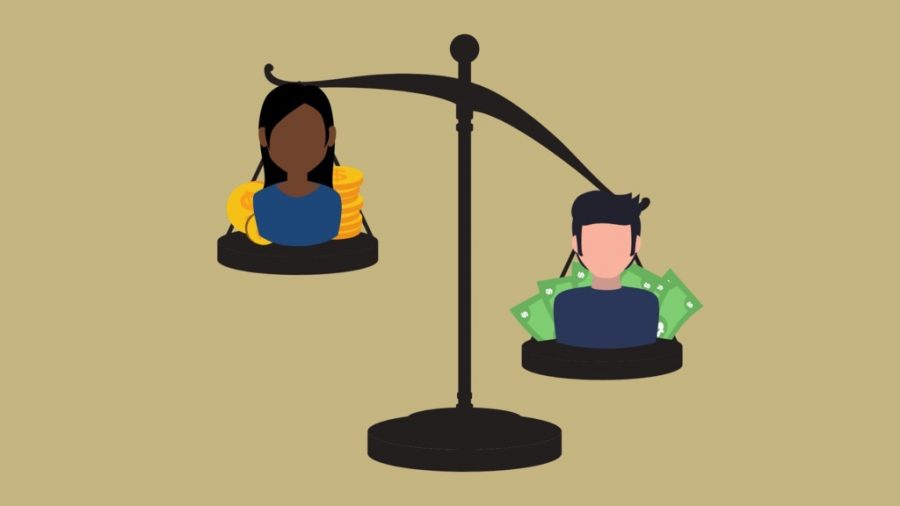 According to Forbes, the average female athlete is paid $71,635 compared to male athletes being paid on average $6.4 million. Graphic by Kelly Kiernan

When I tried out for my high school softball team my freshman year, I was pleasantly surprised by the mediocre but freshly-dragged dirt infield and yellowish-green outfield.

In my defense, it was a big step-up from the small field nestled behind the abandoned middle school, complete with potholes and weeds in the outfield, where my travel ball team practiced.

I was impressed until I wandered over to the other side of campus and laid my eyes upon the men’s baseball field.

Complete with stadium-like bleachers, a perfectly manicured outfield and a draining system that worked wonders (I later found out that the softball field flooded anytime there was any kind of rainfall), the baseball field looked like it should’ve been at a whole different high school.

Women’s sports are underfunded, undervalued and unappreciated. The gender pay gap between men’s and women’s sports is, in simple terms, appalling.

We’re heading into a new decade and it’s time for female athletes to receive the same treatment as male athletes. It’s time they get the equality they deserve.

My high school is only one instance of the inequalities between men and women in the sports industry. So many other high school, youth league, college and professional women athletes around the nation continue to face the same inequalities today.

Heck, the other high school in my hometown didn’t even have their own softball field. Their team had to practice and host home games at two different off-campus fields.

On the Forbes 2019 list of the world’s 100 highest-paid athletes, there is only one woman. Tennis champion Serena Williams ranks #63 on the list.

I don’t think I need to spell out the inequality for anyone reading. The numbers speak for themselves.

Some of the most common arguments I hear are as follows: (1) men are better athletes and deserve to be paid more and (2) women aren’t as marketable as men.

I’m really tired of hearing that men are just more athletic than women. That argument is outdated and sexist.

May I direct your attention to collegiate champion and Olympic gold medal softball pitcher Jennie Finch.

Giles admitted he never even touched the ball, stating her fastball was the “fastest thing I’d ever seen.”

Years later, MVP Barry Bonds challenged Finch to a duel of sorts, stating she needed to face “the best.” Bonds only tapped the ball once, and it puttered into foul territory.

If that’s not enough, more recently there’s also the case of the USA women’s soccer team. Even those not as engrossed in the sports world have likely heard of the success of the team, the millions of dollars they raked in and their subsequent fight for equal pay.

The pay discrepancies between genders boils almost entirely down to the revenues made by the teams. It’s a fact that women’s sports bring in less money than men’s, but female athletes really aren’t even given a fighting chance.

How are men more marketable than women, when women aren’t even marketed in the first place? How would people know to check out the WNBA when the coverage of the sport is almost nonexistent? Has anyone even heard of the professional softball league? It exists, Google it.

According to the Women’s Sports Foundation, approximately 40% of athletes are women but only 6 to 8% of total media coverage goes to females.

I’ll say it again, you can’t argue someone isn’t marketable if you don’t provide the resources to market them. It’s a rippling effect. Without the media coverage, there are no fans, women can’t rake in the coin, people start to believe men are more marketable and women receive no funding.

As a lover of all athletics, I’m not trying to take away the skill of male athletes. I’ll be the first one to admit that I do watch and enjoy a competitive game of men’s ice hockey or baseball.

But, just because men are skilled doesn’t mean you negate the talent and importance of a whole other gender.

My travel ball team practiced just as much as any boy’s team. When I wasn’t at practice, my parents were paying good money for me to go to a personal softball trainer. My team and softball were my entire life for over ten years.

Only to then go play tournaments at fields that smelled like manure and had a baby rattlesnake slithering through the outfield (true story).

We are a long way away from gender equality in sports and that’s just the nature of the world, but it’s about damn time people start paying more attention and paying respect where it’s due.