OPINION: Top 10 movies of the decade 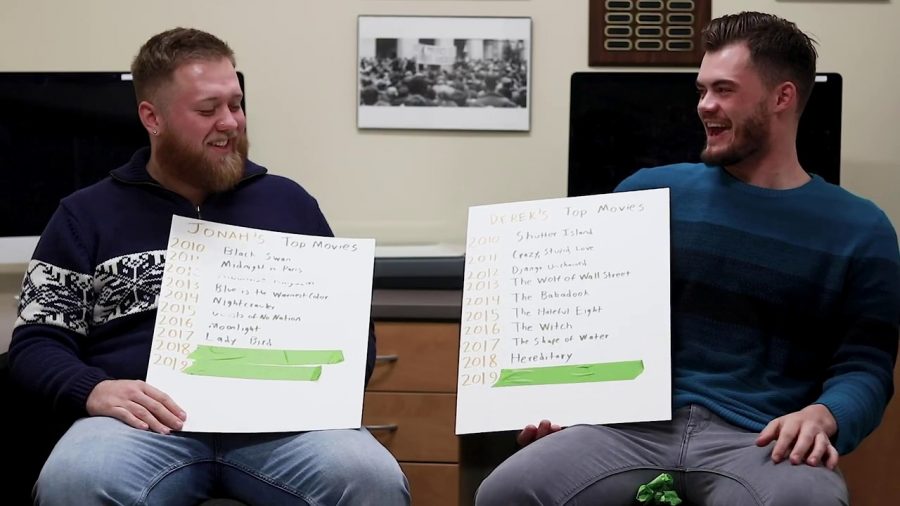 The 2010s were a landmark time for cinema. State Hornet opinion staffers Jonah Salazar and Derek Catron sat down to discuss their favorite movies of the decade, by year.
Derek’s Top Movies of the Decade
2010 – Shutter Island (IMDb: 8.1/10, My Score: 9/10)

“Shutter Island” is one of the greatest multi-genre films of the past decade. It wasn’t received as well as “Inception” and often gets forgotten, but I preferred it for one main reason: it was similarly complicated, but it made sense.

2011 was a relatively underwhelming year in cinema, but “Crazy, Stupid, Love” is the most charming and hilarious rom-com I’ve ever seen. It’s my go-to breakup movie.

I promise I’ll lay off the DiCaprio films after this one, but this is one of my all-time favorite movies, and it isn’t because of the dopamine and testosterone-fueled excitement. I was impressed that this film is a more-than-respectable drama while also being funnier than any comedy film I’ve ever seen. Also, Jonah Hill gives hands-down the best performance of his career.

“The Babadook” is one of the most chilling horror films I’ve ever seen. It is one of perhaps three that have ever cost me hours of sleep. I couldn’t make it all the way through by myself. It’s an artistically terrifying story about grief.

Earlier, I mentioned “Django Unchained” as my second-favorite Quentin Tarantino movie. This is number one. “The Hateful Eight” excels in virtually all categories: character development, plot development, scenery and filmography, and the acting for all eight main characters is superb. I will never stop rewatching this movie.

“The Witch” might just be my favorite horror movie ever. The Old English was hard for me to follow on the first watch, but it’s well worth it if you have the attention span to ignore your phone for an hour and a half.

“Hereditary” is objectively the best horror film ever made. It’s not just a great horror movie; it’s a great movie, period. It deserves far more recognition.

Robert Pattinson and Willem Dafoe each give one of the best performances of their careers in this haunting tale that requires more than one watch to fully dissect.

While arguably being one of the more tame films by Darren Aronofsky, “Black Swan” still pushes the envelope even by 2019 standards. Natalie Portman’s struggles with her mental illness, accompanied by Aronofsky’s dream-like visuals, make for a fantastic film that everyone should at least see once.

As problematic as Woody Allen is, I will still give credit where credit is due. “Midnight in Paris” does a fantastic job of romanticizing a culture long-forgotten and makes you wish you could spend a night alongside Owen Wilson in 1920s Paris.

Arguably the most “Wes Anderson” Wes Anderson film, “Moonrise Kingdom” has earned a special place in my heart as my go-to feel-good movie. It makes me nostalgic for childhood memories that I never had and it never fails to put me in a good mood.

Probably the most controversial film on my list, “Blue is the Warmest Color” is still one of my all-time favorites. The story between Adéle and Emma is told so well and intimately that you might even feel like the third wheel at times. The three-hour runtime and a few explicit scenes might scare off some, but it is definitely worth a watch.

One of Jake Gyllenhaal’s best roles to date. Dark, thrilling, and downright terrifying at times, “Nightcrawler” had me on the edge of my seat the entire time.

After the death of his family and the destruction of his home from civil war, Agu joins a group of guerilla soldiers to survive in the jungles of West Africa. This movie is so heartbreaking that you’ll definitely need a palate cleanser when you’re through, but everyone should it at least watch it once.

Following the life of Chiron, a young gay black man growing up in Miami, “Moonlight” tells the story of community influence over the lives of individuals and how the decisions we make effect those around us. As someone who has struggled with identity issues in my childhood, this film struck a chord with me and despite our differences in circumstances I was able to identify with Chiron in a way I haven’t been able to with a character before.

As a Sacramento native I, of course, have to have “Lady Bird” on my list. A coming-of-age tale with two of my favorite actors is just too good for me to pass up.

Showcasing the realities of the lesser-discussed World War, Peter Jackson’s colorized film of WWI trenches plants the viewer on the front lines amongst the men that risked their lives fighting for their countries. Not only is this my favorite documentary, but it’s one of my favorite films of all time.

Neon has struck gold with “Parasite.” Catering foreign films to western audiences has always been a challenge for studios, but director Bong Joon Ho has created something that is relatable and recognizable enough to be appreciated by a wider variety of audiences. Don’t let the trailers fool you, “Parasite” is much more than it appears.