OPINION: Top 10 most annoying songs of the decade 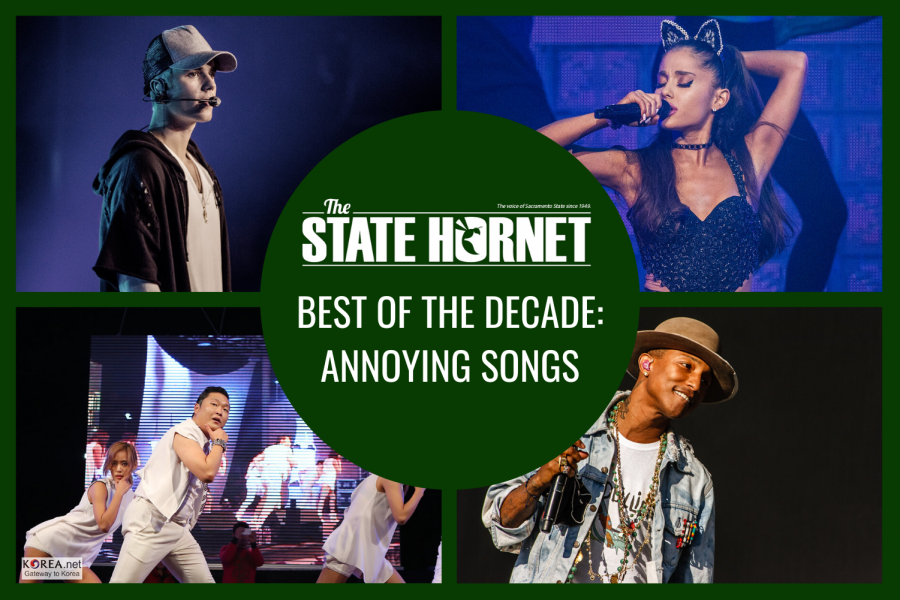 Music is an extremely vital art that brings everyone together, even if it’s to rant about how excruciatingly annoying certain songs are.

These are the top 10 songs of the past decade that got on my nerves really quick
10. “Boyfriend” by Justin Bieber (2015)

Listen y’all, I was a huge JB fan back in the day, like circa 2010, a few years before he turned into an annoying teenager who egged people’s houses and peed in a restaurant’s mop bucket. But this song, while being extremely catchy, was also sung way too much by girls in my sixth grade class and honestly, the lyrics make absolutely no sense.

We really let Justin sing, “Swag swag swag, on you. Chillin’ by the fire while we eating fondue” as if that was a completely normal thing for anyone to say.

justin bieber really said “swag, swag, swag on you. chillin by the fire while we eatin fondue” and we just let him

Also, am I the only one that was weirdly pissed off by the lyric “I could be your Buzz Lightyear, fly across the globe”? Like seriously, the one thing we should all know about Buzz is that he flies across the galaxy, not the globe.
9. “break up with your girlfriend, i’m bored” by Ariana Grande (2019)

Unlike Bieber, I’m still a huge fan of Ariana Grande. The “thank you, next” album is one of my top five favorites of 2019, but this song happened to be the only one that I purposely skipped each time.

My biggest nightmare is having to watch eight different girls badly lip sync to songs on Snapchat, so you can only imagine how much of that I went through during the peak of this song. I can just see all of them swishing their heads left to right, flipping their hair back, alone in their bedrooms and trying to get the perfect video before their mom walks in on them.

To make sure I get my point across: no honey, he is not going to leave his girlfriend for you, please get off social media and study for that midterm that you know you’re going to fail next week.
8. “Mi Gente” by J Balvin ft. Beyoncé (2017)

Having Beyoncé anywhere near a piece that has annoying in the title breaks my soul, but this song screams “summer hit that should’ve been dropped from the music list sooner.” If grandmas at the gym are doing their Zumba to it, then you will most likely find me on the complete other side of the building, attempting to lose my hearing by blasting music in my headphones to avoid listening to this song.
7. “In My Feelings” by Drake (2018)

Drake is infamous for creating long-lasting bops that fans can sing straight through with immense passion, but honestly, does anyone actually know any lyrics of this song beyond the chorus?

You would think because of the title, maybe it would be a sad song that got everyone in their feels and made them contemplate their love life. Instead it just managed to be one of the many cringey dance routines that haunted me on Instagram and Twitter.

There are internet trends that can last a lifetime, but I’m glad we let this one die out, just like Kiki’s love for Drake.
6. “Call Me Maybe” by Carly Rae Jepsen (2011)

The lyrics, in theory, are out of a romantic teen movie. The girl wishes for her dream boy through a wishing well, he appears in front of her, and she tries to get him to fall in love with her.

It’s the perfect start to forever after.

Pair the lyrics with high-pitched singing and a continuous loop on every station and music channel imaginable, and you suddenly lose the fantasy. I think any one of us alive during this time wished Jepsen had just thrown her phone away and kept the wish to herself.

There was no escaping this song in 2011 and really any time after that. I can’t count how many times I’ve unironically sang this song, despite my deep annoyance with it.

I guess catchy beats with simple lyrics are my downfall.
5. “Let It Go” by Idina Menzel (2013)

If you don’t get war flashbacks of your younger family members asking you to play this song, followed by them screeching the lyrics out to anyone within hearing distance, did you even really watch “Frozen?”

The question “Do you have any games on your phone?” is already one that makes the books, but if “Can you play ‘Let It Go’?” doesn’t want to make you run in the other direction, I don’t know what will.

The time I spent listening to this song with my nieces and nephews, is a part of my life I desperately want back.
4. “Gangnam Style” by PSY (2012)

I really have to give props to PSY for dropping off the face of the Earth after creating a song that millions of people didn’t know the words to, yet was made the first YouTube video to garner a billion views and is still one of the top most viewed videos ever.

Can you suddenly hear the nasally, robotic teenage voice telling you she gets down on Fridays by “kickin’ in the front seat” and “sittin’ in the back seat” or is that just me?

This poor girl fully knows that she will never be able to meet anyone that doesn’t know who she is and already thinks she must be as annoying as her song, but really what else can you expect when you write one of the most irritating songs known to man?

Most of the time, this would hands-down be the most annoying song I have and will ever hear, but I once heard Black sing “Friday” acoustically, and to be completely honest with you, it wasn’t that bad. But, trust me, it’s the only thing that saved this song from topping the list.
1. “Despacito” by Luis Fonsi & Daddy Yankee ft. Justin Bieber (2017)

There is nothing you can say that will convince me that “Despacito” isn’t the most annoying song to come out of this decade.

This is the song that finally forced me to get a Bluetooth aux for my car because five different radio stations were playing it one after the other during my ride home from school.

I legit almost cried out of frustration.

I couldn’t go anywhere or do anything without hearing this damn song. Every school dance, party and social media post in 2017 was cursed with the essence of “Despacito.”

It’s not surprising that Bieber is on this list more than once and I would put way more of his songs on here, but for the sake of some diversity, I limited myself.

The original song before Bieber’s feature was not bad at all and I actually really enjoyed it — the music video is beautifully sensual and Luis Fonsi is a treasure to Latin music.

I guess JBeebs just has that effect on music.

I know there are so many more annoying songs from the 2010s, but if we were to name them all, we’d be here forever.

Now if you’ll excuse me, I’m in the process of desperately trying to forget all of these songs exist.