OPINION: BEST OF THE DECADE: Defining Songs of the Decade 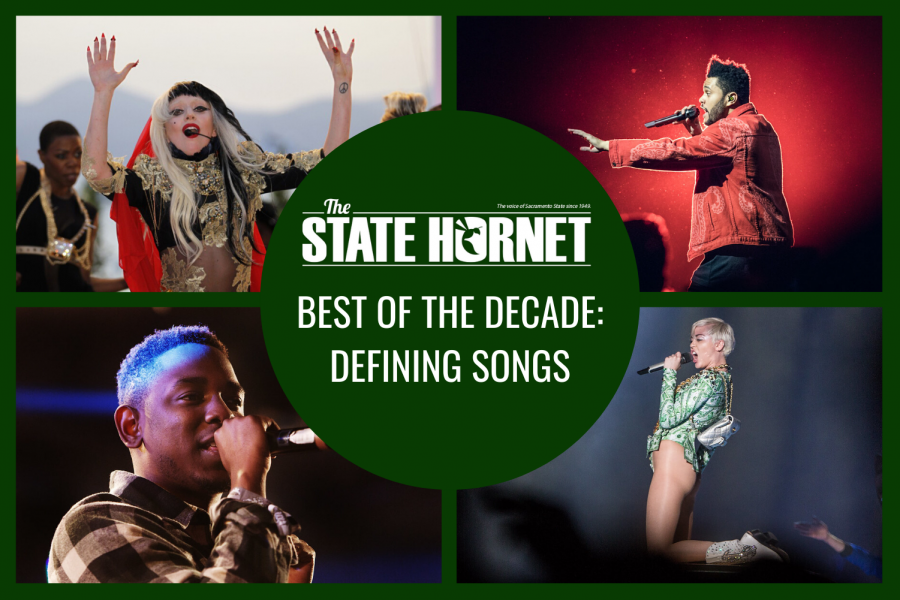 Music is a big part of our culture, and the popular style of music defines decades. The ’70s had disco, the ’80s had glam rock, the ’90’s had grunge and the 2000s had pop and R&B. But this past decade has had a mixture of different popular styles, from pop to country to alternative, so it’s been hard to define this decade in terms of music. It is easy, however, to define each year of this decade with its own song.
2010: “Animal” by Neon Trees

This song was an upbeat song that was played on the airwaves and was downloaded to everyone’s first-ever iPad. “Animal” won Top Alternative Song at the Billboard Music Awards in 2011 and was covered by a handful of artists including Panic! At the Disco, Taylor Swift and even the cast of “Glee.”
2011: “Born This Way” by Lady Gaga
https://youtu.be/wV1FrqwZyKw

This “manifesto of mother monster” was played everywhere and was one of Gaga’s greatest songs that was on everyone’s iTouch and played just about everywhere you went. This song reached No. 1 in over 25 countries and sold over 1 million copies within the first week, making it one of the best-selling singles of all time.
2012: “Somebody That I Used to Know” by Gotye

You couldn’t go anywhere without hearing this song playing, and there’s a good reason. With its soft beat, Gotye’s powerful voice and lyrics that just about anyone can relate to, this song won two Grammy Awards in 2013, despite being released in 2011.
2013: “We Can’t Stop” by Miley Cyrus

Everyone has mixed feelings about this Era of Miley, but “We Can’t Stop” was playing everywhere in 2013 and made sticking your tongue out in photos a huge trend. This song held high ranks on record charts around the world, including New Zealand and the United Kingdom. Not to mention this song’s performance at the 2013 MTV Music Video Awards that sparked plenty of conversation.
2014: “Shake It Off” by Taylor Swift

The first song of Swift’s that was all pop and no country was the lead single for her fifth album “1989.” This song was Swift’s second single to reach number one on the Billboard Hot 100 and was on the charts for 50 consecutive weeks.
2015: “Can’t Feel My Face” by The Weeknd

This song was on every radio and played at every club in 2015. This song peaked on Billboard’s Hot 100, followed by “The Hills,” The Weeknd’s second single from the same album.
2016: “Work From Home” by Fifth Harmony

Before Camila Cabello split from the X-Factor group, “Work From Home” was a hit off of their second album. This song won Best Collaboration at the 2016 MTV Video Music Awards and the American Music Awards.
2017: “Humble” by Kendrick Lamar

This was one of the most talked-about songs in 2017, and it was also one of those songs that you couldn’t escape on the radio or while out in public. “Humble” received four nominations at the 60th Grammy Awards and won Best Rap Performance, Best Rap Song and Best Music Video.
2018: “Thank U, Next” by Ariana Grande

Though this song came out at the tail end of 2018, it was still the most iconic song of the year. The music video alone was enough to make it the most talked-about song of the year, but the mention of her exes and the release coming shortly after the death of her ex, Mac Miller, and split from Pete Davidson put the hype for this song over the edge.
2019: “Bad Guy” by Billie Eilish

Billie Eilish has come into her own as an artist and “Bad Guy” proves it. As another song you can’t escape, it reached number one on the US Billboard Hot 100, taking “Old Town Road” off out of the No. 1 spot.

The evolution of music through the decade shows just how much music impacts a decade, from 2010 being about alternative music to 2019 chart-topper being pop-trap. Music changes and evolves with time, who knows what the next decade of music has in store for us. You can find these songs and more decade hits on this Spotify playlist.