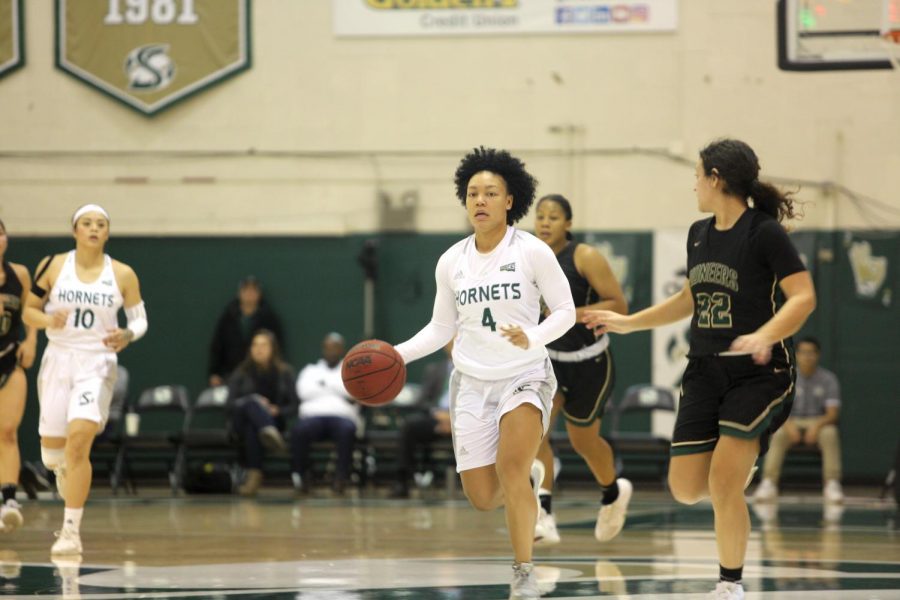 In a battle of teams with losing records, the Sacramento State women’s basketball team dominated Pacific Union College 94-35 at the Nest on Thursday night.

The Hornets (2-7) were determined to break their six-game losing streak with a win against the Pioneers. Meanwhile, Pacific Union (0-10), an NAIA liberal arts school from Napa, was seeking its first victory of the season.

Both teams struggled shooting in the first five minutes as Sac State led 12-6. After that, the Hornets began making their shots and outscored the Pioneers 19-2 to close the quarter with a 23-point lead. Sac State employed smothering full court defense, forcing Pacific Union to commit 19 turnovers in the first quarter leading to many fastbreak layups.

Sac State continued its dominant play in the second quarter. The Pioneers had a quarter to forget as they only made 1-13 field goal attempts. Sac State limited Pacific Union to eight points for the second consecutive period and held a 52-16 lead at halftime. The Pioneers shot 18% from the field in the first half.

The Hornets and Pioneers played a much more competitive third quarter as Sac State only outscored Pacific Union by six at 22-16 to take a 74-32 lead into the final period. The Hornets switched their defensive game plan in the second half to a zone, allowing the Pioneers to score as many points in the third as they did in the entire first half.

“We dropped into a zone in the second half and usually we press the whole game,” said sophomore guard Summer Menke. “It was good to work on that and everyone knew what they were doing even though we don’t usually run it.”

Sac State got back to dominating in the final quarter, outscoring Pacific Union 20-3 en route to a 94-35 victory.

“Pacific Union played hard and I think our depth was the difference against them,” said head coach Bunky Harkleroad. “We shared the minutes today. We played everyone on the bench that was available and everyone got a lot of opportunities to shoot the ball, play and compete.”

The Hornets led the entire game and forced the Pioneers into 41 turnovers and 24.5% shooting from the field. All 14 players in uniform played for Sac State. Sophomore guard Sarah Abney was the only player not to play more than 10 minutes as she suffered a shoulder injury seven seconds after entering the game and did not return.

Other than Abney, sophomore forward Tiana Johnson played the least for Sac State at 11:44 but was very effective off the bench in limited time. Johnson was perfect on the night, shooting 4-4 from the field and 8-8 from the free-throw stripe to score a game-high 16 points while adding seven rebounds and three steals.

Menke followed Johnson with 13 points on 6-15 from the field. Freshman forward Sharaya Coe had a game-high 12 rebounds and seven points off the bench.

Despite the nearly 60-point win, Johnson mentioned postgame that their team still needs to work on chemistry and maintaining their energy level through all four quarters.

“We have yet to play every single quarter as hard as we can,” Johnson said. “(We) definitely (need to) learn how to play a full game and then learning how to work with each other more on our team chemistry.”

The Pioneers had two leaders in Thursday’s blowout loss. Senior forward Faith Williams scored a team-high 15 points and had nine rebounds. Sophomore center Jasmine Peete had a double-double with 10 points and 11 rebounds.

“I think we really needed this mentally as a team,” Menke said. “We’ve been performing well. (This win is a) confidence booster and hopefully helps us win some more games with conference play starting.”

The Hornets now have nine days off for Christmas before returning to the Nest to open Big Sky Conference play. Sac State will host Montana State on Dec. 28 at 2:05 p.m.