TESTIMONIAL: I’m forced to hide my political beliefs from my family 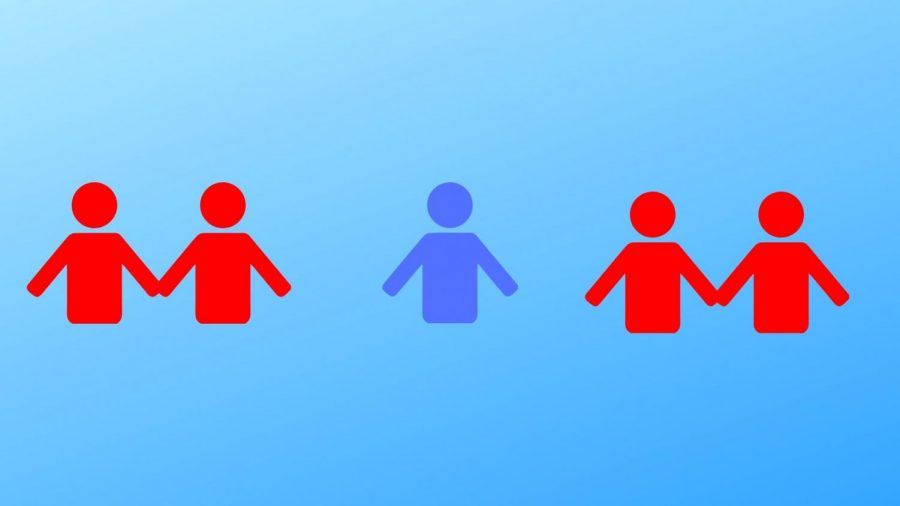 Graphic created by Kayla Brown Being singled out by your family for being a liberal is a painful experience. No one expects their family to turn on them over politics.

When I tell people I’m from a town down by Los Angeles, a lot of people assume I was raised in a liberal community, but weirdly enough I was born and raised in a “red” city full of gun owners and wanna-be cowboys, and this includes my family.

I shouldn’t have to hide my political views from my family in fear that I could lose their financial and emotional support.

My entire family believed in Mitt Romney, despises Gov. Gavin Newsom and supports President Donald Trump. All the while I’m the black sheep of the family because I’m secretly a liberal, something I shouldn’t have to hide.

The 2016 election was my first time ever getting to vote, and I was excited but also terrified because it was shaping up to be one of the most divided and drawn-out elections. I had voted for Hillary Clinton, but I would never tell my family that, so instead I told them I voted for Gary Johnson because “California is going to come out Democrat anyway so my presidential vote doesn’t matter.”

Shortly after the elections my sister, who was 15 at the time, began to make fun of me by saying I voted for Hillary Clinton. Suddenly being called a liberal was an insult in the house I had grown up in.

Even to this day, I’m not allowed to label myself as a liberal in my own home, even when it’s very obvious that I have liberal and progressive views when I’m around my mom and siblings. But when it comes to my dad and his side of the family, I tend to keep my mouth shut in most conversations.

My family loves talking about how everyone has the right to guns and the government can’t control it, while I believe that the government needs to make it harder for people to obtain guns. Trump is idolized in my grandparent’s house and God forbid anyone ever says anything negative about him, while I think he’s a maniac who should’ve never become president.

You can say the conservative views are because my grandpa was raised in the south, but that’s not an excuse for complaining whenever there’s a gay couple on HGTV and begging the TV to not show them kissing, something I have witnessed my grandma doing.

Holidays are hard because I can’t say anything that’s not a conservative belief without the fear of my entire family turning on me in an instant. So instead of fighting for my beliefs, I have to sit there and quietly listen as my family complains about “liberals wanting to take our hard-earned money” and how “millennials think they’re entitled to free college.”

When I was home over this past summer my younger sister made a joke about how I’m a liberal and my dad went as far as to make a threatening joke that if I were a liberal he would kick me out of the house. I’m not sure if it was a joke or if he had meant it, but it put me in place and made me fear to be open about my political beliefs even more.

I shouldn’t have to hide my political beliefs, but in a world where politics strain relationships and someone like Trump is in the White House, sometimes it is better to keep your mouth shut.