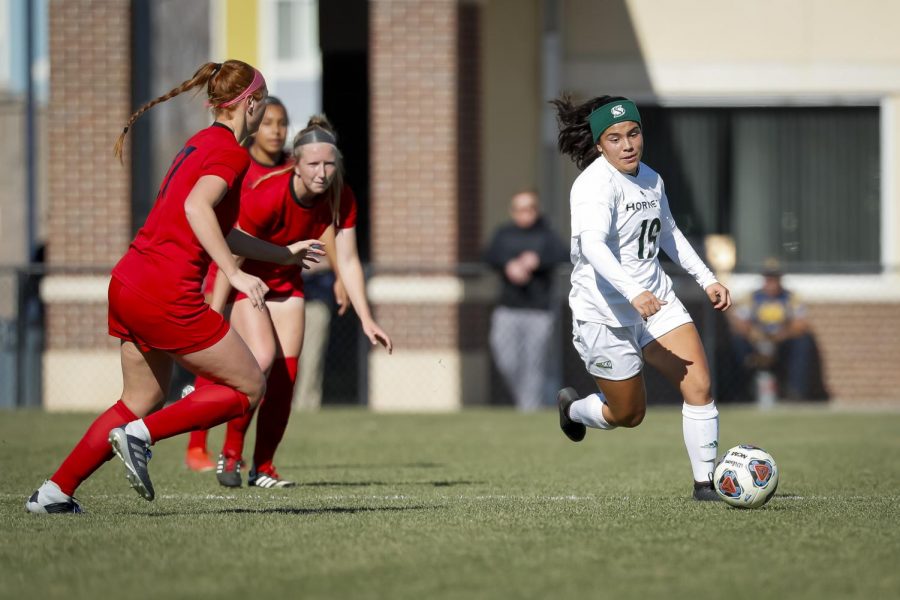 Sac State senior midfielder Camila Fonseca dribbles through the defense against Eastern Washington on Friday, Nov. 8 in Greeley, Colorado. The Hornets lost to the Eagles 2-1 in overtime of the Big Sky Championship semifinals, snapping a record 17-game unbeaten streak.

The Sacramento State women’s soccer team’s season and record 17-game unbeaten streak came to an end with a 2-1 overtime loss to Eastern Washington University in the semifinals of the Big Sky Conference Tournament.

Early on in the game Friday, the Hornets’ first-round bye appeared to be a hindrance for them. Sac State started out with a lack of energy and could not string together possessions and as a result, Eastern Washington dominated the time of possession.

With the game being played in Greeley, Colorado, the change in elevation may have also affected the way the players played.

“I know a lot of people were having trouble breathing,” said junior midfielder Erika Munoz.

However, this early struggle did start to fade out in the later parts of the first half for the Hornets.

In the 40th minute, Sac State grabbed a 1-0 lead over Eastern Washington thanks to a goal from Munoz off an assist by junior midfielder Shay Valenzano. The Hornets took a 1-0 lead heading into halftime.

In the 61st minute, Eastern Washington was able to level the game at 1-1 after a goal from freshman midfielder Madison Kem. The assist came from sophomore defender Mya Elder-Hammond.

A scary moment for the Hornets happened late in the second half when senior defender Mia Wilson had to be checked out with an apparent head injury. However, she was able to make a return to the game only about a minute later.

Eastern Washington clinched the win on a golden goal by freshman forward Maddie Morgan in the 102nd minute off an assist by junior midfielder Sariah Keister.

Even though it ended in postseason defeat, this season was highly successful for this Hornets team.

The 2019 Sac State women’s soccer team set school records for most wins in a season, with 11, and least amount of regular season losses, with one.

The season was a highly productive one for Hornet players individually.

The achievement was especially sweet for Fesili who missed all of last year with an ACL injury.

“I am proud of how I was able to bounce back from my ACL injury and having taken a year off,” Fesili said.

However, all those accolades did not fully take away the sting of a postseason loss for Sac State head coach Randy Dedini.

“When you fall short of your ultimate goal of winning a Big Sky Championship, it doesn’t feel like it was a full, successful season,” Dedini said after the game. “Compared to last year, I think it was a great step forward.”

Munoz echoed the sentiments of her coach, remaining optimistic about the future of the team.

“I think we got the ball rolling now, so I think we can only get better,” Munoz said. “I’m excited for us to become more mature as a team.”