Hornets started strong but failed to finish without star forward 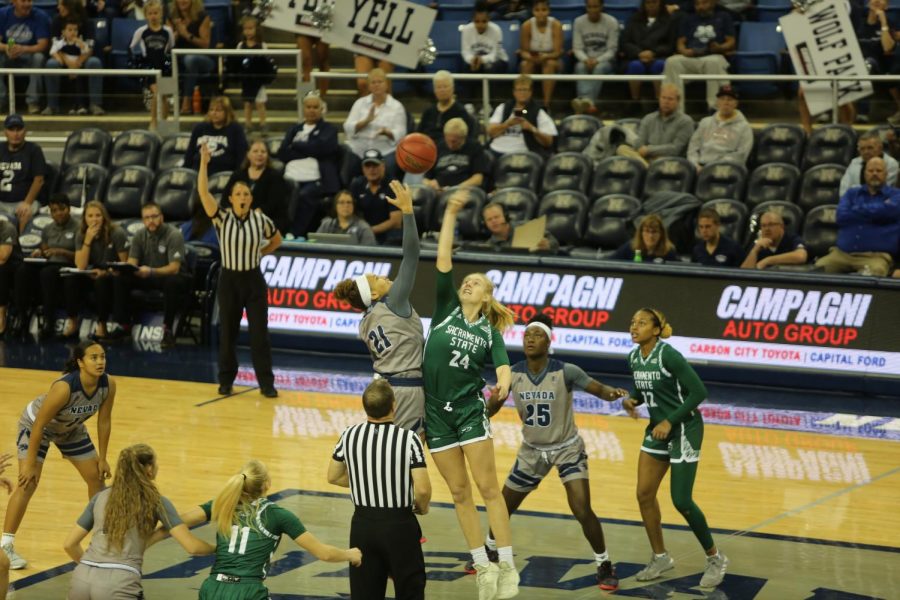 Sac State sophomore forward Tiana Johnson battles Nevada sophomore forward Imani Lacy for the opening tip on Saturday, Nov. 9 at Lawlor Events Center in Reno, Nevada. The Hornets led after the first half, but ultimately lost 83-72 to the Wolf Pack.

The Sacramento State women’s basketball team opened their season on Saturday afternoon against the University of Nevada, Reno in a hard-fought battle.

Despite a strong start, the Hornets (0-1) fell short in their attempt to upset the Wolf Pack, losing by a final score of 83-72.

Kennedy Nicholas was unavailable due to a minor ankle injury that she picked up in the closing minutes of Friday’s practice. Listed at 6-foot-3, Nicholas is Sac State’s tallest player and led the team in both points and rebounds last season among returners.

“Tiana Johnson started at post. She’s never done that in her life, at any level,” Harkleroad said when asked about the effect of Nicholas’s injury.

Despite lacking in size, the speed and shooting of the Hornets seemed to take the Wolf Pack by surprise early on, as Sac State controlled much of the first quarter and established a 24-20 lead.

The Hornets shared the ball well, but Bade was the hot hand early. She recorded 11 points in the first quarter, including the team’s first eight.

The Hornets continued to push the pace in the second quarter and opened up a 37-25 lead on a pair of free throws by freshman forward Sharaya Coe — the largest Hornet lead of the game.

Nevada finished the second quarter strong, however, and cut Sac State’s lead to 45-42 heading into halftime.

In the second half, the Wolf Pack ground the Hornets down with physical play. The strength and size of Nevada’s frontcourt dominated the third and fourth quarters, as Nevada outscored Sac State 41-27.

Nevada didn’t hit a single 3-pointer in the entire game, but they took 14 more free throws and won the rebound battle 56 to 35.

“That’s a typical Mountain West (Conference) team,” Harkleroad said of the discrepancy in height and weight between the two teams. “It’s going to look a lot like that.”

The Wolf Pack and the Hornets engaged in a classic matchup of size against finesse. In the end, size won.

Despite that, one of the smallest players on the court managed to stand out. Sophomore point guard Milee Enger came off the bench and repeatedly put her body on the line to take charges and grab loose balls. She finished the game with seven points, four steals and four assists.

Bade led all players with a game-high 26 points, including three 3-pointers. She also led all Hornets with nine rebounds.

“We attacked them first, but when they started catching up I think we started getting nervous and we didn’t really know what to do,” Bade said. “Nevada’s offensive rebounds killed us.”

King, who transferred to Sac State from Nevada in the offseason, struggled in the matchup against her former team. She went 0-for-14 from the field with two points, four assists and three rebounds.

Harkleroad said that while the team showed fight despite their tough circumstances, he will never be satisfied with a loss. He expects a better result in Sac State’s next game.

“We’re going to have a good year,” Harkleroad proclaimed. “We’re going to do a lot of good things. I’m very disappointed in the loss, but we played hard. This game will help us in the long run.”

Sac State returns to The Nest this Wednesday when the Hornets host their home opener against California State University, Maritime Academy at 7:05 p.m.