Despite an early 10-point lead, the Hornets fall short on the road 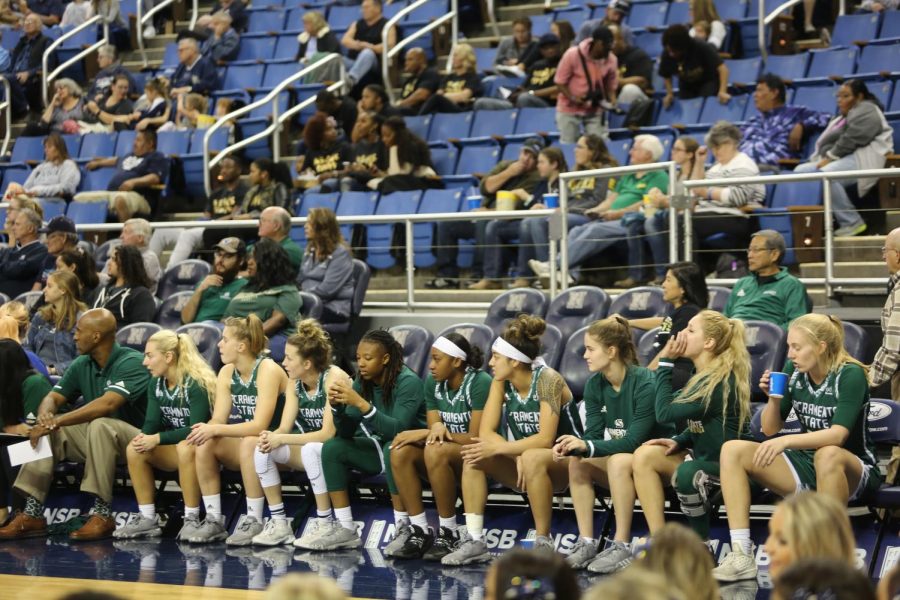 The Hornets bench watches their starters build an early lead in the first half of their season opener against Nevada on Saturday, Nov. 9 at Lawlor Events Center in Reno, Nevada. Sac State lost 73-67 to San Jose State on the road Sunday.

The contest started out with sloppy play from both sides, as the Hornets and Spartans combined for two fouls, two turnovers, six missed shots and zero points across the first two minutes of the first quarter.

Enger finally broke through with the first bucket of the game with a 3-pointer for Sac State. San Jose State sophomore guard Raziya Potter answered back with a 3-pointer of her own, but those would be the last points that San Jose would score for a while.

The Hornets went on a 10-0 run on the back of a strong defensive showing. Energy on the perimeter and strength on the inside forced the Spartans to go a full four minutes without scoring.

A part of that defensive effort came from senior forward Kennedy Nicholas, who returned to action for the Hornets after missing the first two games of the season with an injury to her right ankle. She played a total of 18 minutes off the bench.

San Jose State completely turned the tide in the second quarter, however, going on a nine-point run of their own to tie the game at 21.

Johnson finally broke Sac State’s scoring drought with a tough layup, but the Hornets continued to lose ground as the second quarter ticked on.

Potter repeatedly found success with her dribble drive, penetrating Sac State’s defense to get to the cup. No Hornets player seemed to be able to contain her combination of speed and strength, as Potter collected 11 first-half points.

Sac State lost its discipline on both offense and defense, racking up nine fouls in the second quarter, compared to just four for San Jose State.

The Spartans outscored the Hornets 28-10 in the second quarter and took a 40-31 lead headed into halftime.

Both teams struggled to find footing in the second half until Nicholas turned it on with four minutes left in the third quarter.

Bade found Nicholas for an easy bucket on an out-of-bounds play. Nicholas grabbed an offensive board on the next possession and scored again. That seemed to be the boost the Hornets needed to stay in the game.

“I was definitely rusty going into today’s game,” Nicholas would later say. “Towards the end of the third quarter, I think that’s more what we should expect from both of us and myself for the rest of the season, once I get my nerves and my footing under me.”

Sac State cut San Jose State’s lead to six, with a score of 54-48 at the end of the third.

While each team took turns looking very much lost at times throughout the beginning of the game, both the Hornets and the Spartans showed up in full force for the fourth quarter. Sac State and San Jose State displayed more and more energy as the game stayed tight to the end.

Back-to-back three-pointers from Menke got Sac State within two points, but 62-60 was as close as the Hornets would get to a win in this one.

Despite strong performances from Menke, Johnson and Nicholas, the Hornets fell short to the Spartans by a final score of 73-67.

“San Jose State kicked our ass,” Bade said. “They were more aggressive and it showed.”

Bade, who led the team in rebounds, assists, and steals, struggled shooting the ball and felt that she was forcing it at times. She pointed out that many players, including herself, weren’t making decisions quickly enough, often causing shots to come with too much hesitation.

Harkleroad was notably more reliant on his established players in this game as compared to Sac State’s last two contests. His fourth quarter rotation was almost exclusively Nicholas and the five starters.

“If you’re going to come in off the bench, you’ve got to be ready to contribute and be prepared,” Harkleroad said. “We’re kind of having a hard time right now. Our bench is good but there needs to be some separation among that group in my opinion.”

San Jose State sophomore point guard Ayzhiana Basallo had a masterful showing and finished with 21 points and 11 assists, both game-highs.

The matchup was the first of a five-game road trip. Sac State will head to Cal Poly on Wednesday, Nov. 20 for their next contest.