Hornets lose grip on early leads in both matches 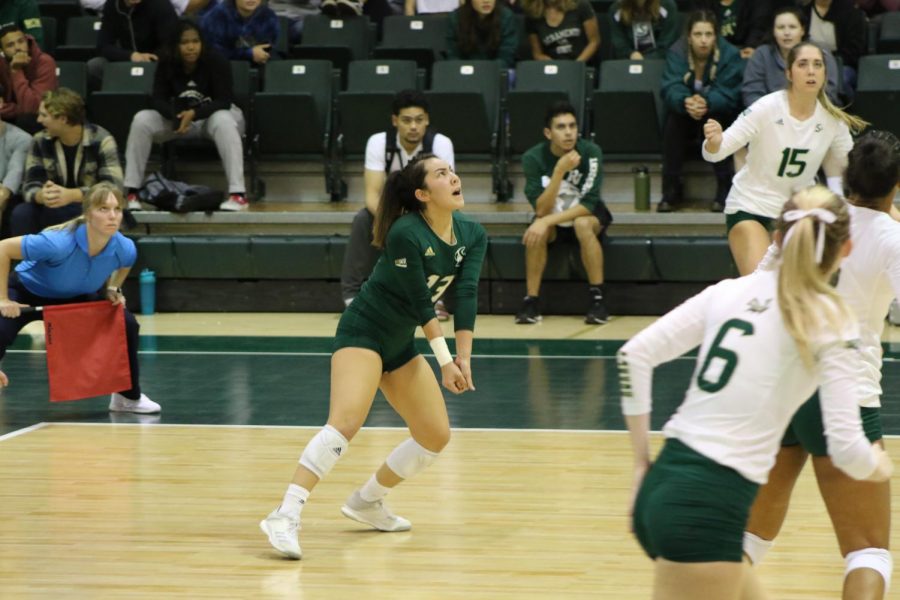 Sac State junior libero Michelle Taynton prepares to bump the ball against Weber State on Thursday, Nov. 14 at The Nest. After being defeated by Portland State and Northern Colorado on the road, the Hornets begin the Big Sky tournament at The Nest on Thursday, Nov. 28 against Montana State.

Although they held leads in both matches, the Sacramento State volleyball team lost the final two games of the regular season while on the road.

Sac State won two of the first three sets, but Portland State clawed their way back to a match victory. The loss makes the two teams 1-1 for the season as the Hornets beat the Vikings in a swift three-set sweep earlier this season at The Nest.

“I think it was just kind of a game of momentum,” said senior outside hitter Sarah Davis. “It was whoever could keep the momentum for the longest period of time and unfortunately we couldn’t keep the energy up to win the match.”

The Vikings came out dominant in set one, hitting .533 percent and quickly battling their way to a 25-19 victory over the Hornets.

Sac State finally saw their first lead of the match when the Hornets went on a 4-0 run to open the second set. Sac State ran away with the set, holding at least a three-point lead over Portland State for the entire set.

Despite falling behind early in the third set, a 6-0 run and two aces from Davis gave Sac State a 7-5 lead. The Hornets once again held on to the lead for the entire set and won set three 25-16.

Halfway through set four, Sac State sat in a good position to take the match with a dominant 14-9 lead. However, Portland State went on a 10-1 run to take control of the fourth set.

“We’ve been a little streaky in our play,” said head coach Ruben Volta. “We kind of made errors at critical times because we had a lead in that fourth set there against Portland State and then we let them come back and we made a few unforced errors and they got a little momentum. They played really well, Portland State did.”

The Hornets were not able to recover and dropped set four to the Vikings 25-19.

Portland State controlled the fifth set, never allowing Sac State to hold the lead. A small offensive rally put the Hornets within one point, but it proved to be too late.

The Vikings defeated the Hornets 15-12 in set five to win the match.

Sac State served up 13 aces to Portland State’s six. However, those 13 aces were not enough to balance out the 13 service errors made by the Hornets.

“We try and serve aggressively,” Volta said. “We don’t want teams to be comfortable in their offense. Sometimes those errors happen at critical times and we don’t want that to happen. I thought we served pretty well against Portland State. We had them for two and a half sets. We beat them fairly handily and in those sets, we beat them with tough serving.”

Sac State opened its second road game of the week with a 15-10 set one lead over first place University of Northern Colorado (23-7, 17-1) Saturday night.

“We went out and knew this was going to be a pretty good match,” said freshman right side hitter Kayla Subbert.  “We were really excited and this is a really good team so it was a good opportunity for us. We went out to the match with a lot of energy and just ready to play.”

The Bears put together a small rally at the end of the set to put them within just two points of the Hornets’ lead, however, Sac State was able to hold on to take a 25-22 victory.

“They’re the top team in the conference and this is a perfect match to play before the conference tournament to be able to play against a really good opponent,” Volta said. “I was really happy with how hard we played, especially to start the match off. It was really a true alpha match. We played really well at times and so did Northern Colorado.”

Northern Colorado came out aggressive in set two and quickly took a comfortable 20-13 lead. The Bears greatly cleaned up their play, making only two attack errors.

The Hornets went on a small offensive run to save three set points, but ultimately dropped set two 25-18 to the Bears.

Set three opened with a nail-biting back-and-forth battle as neither team was able to take more than a one-point lead for a majority of the set.

In the end it was Northern Colorado who was finally able to pull away and win set three 25-20.

Sac State went on a big run to take a 14-5 lead halfway through the fourth set. However, Northern Colorado quickly battled back to tie it up 17-17.

“We had a big lead in the fourth set today and then Northern Colorado started playing a little better and then all of a sudden we got error-prone,” Volta said. “We had a serve receive error and then a hitting error.”

The score went back-and-forth for the remainder of the set. A costly service error from the Hornets and a string of kills gave the Bears the match point at 24-21.

The Hornets saved two set points, but ultimately let their substantial lead slip through their fingers as Northern Colorado defeated Sac State 25-23 to win set four and the match.

“We got a little rattled,” Subbert said. “We let a few mistakes get to us but I feel like we came back really well at the end and pushed through. It was just a tough loss.”

Davis led the team in kills with 15 and recorded 7 digs. Olin had 30 assists and 8 digs.

Sac State closed out the season as the No. 5 seed in the conference and will face No. 4 Montana State University in the Big Sky tournament beginning Thanksgiving day.

“Everyone in the Big Sky is really equal and I think we are really excited to come out and get a second chance at a lot of these teams,” Davis said.

The Hornets play their first game of the Big Sky tournament against the Bobcats Thursday at 7 p.m. at The Nest.