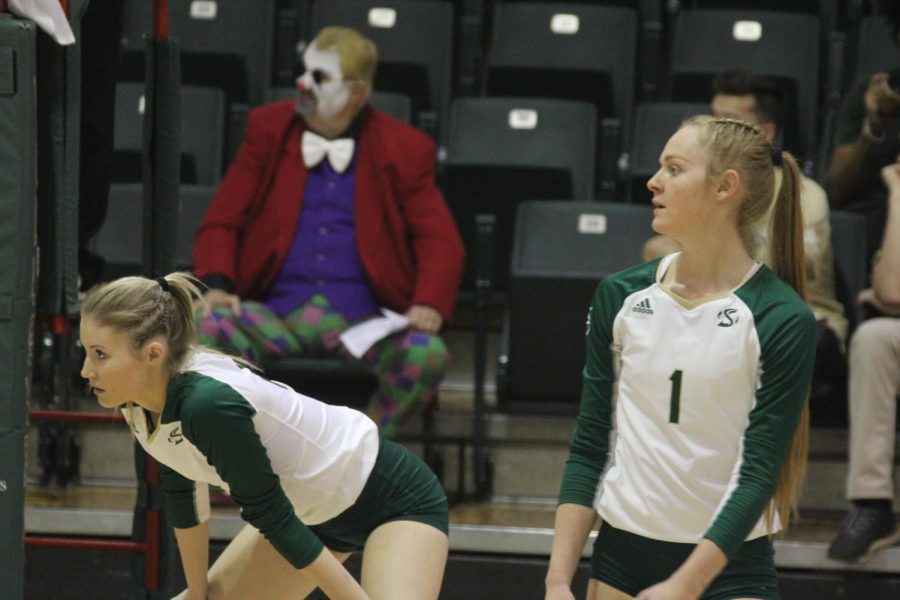 Sac State freshmen Kayla Subbert and McKenna Smith prepare for their comeback on Thursday, Oct. 31, against Idaho at The Nest. The Hornets took set five 15-11.

Senior outside hitter Sarah Davis recorded her 1,000th career kill in Sacramento State’s 3-2 win over the University of Idaho at The Nest Thursday night.

“I think we came in hot later in the game, later than we expected,” Davis said. “I think we really turned it on when we needed to in order to win this match.”

Sac State is now in a four-way tie for second place in the Big Sky with Idaho, Weber State University and Northern Arizona University.

Sac State took an early 4-0 lead in set one but were unable to keep up their dominance. The Hornets saved two set points, but dropped set one to Idaho 25-21.

Idaho dominated the second set and took down the Hornets, but not before Davis could record her ninth kill of the night and 1,000th career kill.

“(Davis) is so smart and aggressive,” head coach Ruben Volta said. “We give her a lot of balls, obviously. We set her in the front row, in the back row. She has just turned into such a good attacker.” 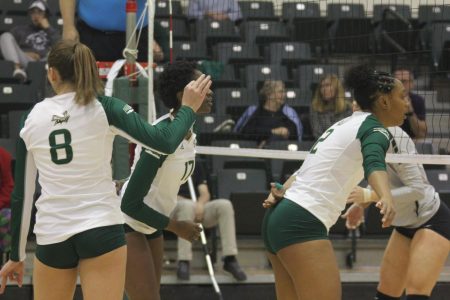 Ian EdwardsSac State senior Sarah Davis and junior Cianna Andrews prepare for the Idaho serve on Thursday night, Oct.31, at The Nest. Davis notched the 1,000th kill of her career and ended the match with 22 kills and nine digs.

With the Vandals leading 23-17 late in the second set, Davis recorded her 1,000th kill to bring the Hornets within five points. However, it was not enough for Sac State to recover as they lost set two 25-20.

In a do-or-die third set, the Hornets came back out with a renewed energy. Sac State took a 5-4 lead early and then rolled over the Vandals 25-13 to force a fourth set.

“After being down the first two sets we went into the locker room and we didn’t like how we were playing,” junior middle blocker Cianna Andrews said. “We turned it around in the locker room first and then we came out and just executed what we were talking about.”

Davis records her 12th kill of the night for the set point.

The Hornets take set three 25-13 and force a fourth set.

Davis has 12 kills, a pair of aces and 8 digs. Andrews has 9 kills and 4 blocks. @SH_Sports pic.twitter.com/jgKjkwK9DL

Eight tie scores and four lead changes saw a more closely contested fourth set. However, it was the Hornets who came out on the right side of the scoreboard again.

Sac State combined for a .367 hitting percentage compared to Idaho’s .167 to lead them to a 25-19 victory over the Vandals, forcing a decisive fifth set.

Davis recorded her 20th kill of the night to give the Hornets a 6-4 lead in the fifth set. The Hornets rolled on to victory, taking set five 15-11 and winning the match.

Davis ended the night with 22 kills, bringing her career total to 1,013. She has 438 kills this season alone. Davis also recorded four aces and nine digs.

“It’s so exciting. I’m so lucky to have had the opportunity to do this,” Davis said about her career milestone. “My freshman year I didn’t play a lot. It’s really cool to come out here and do it in essentially three years.” 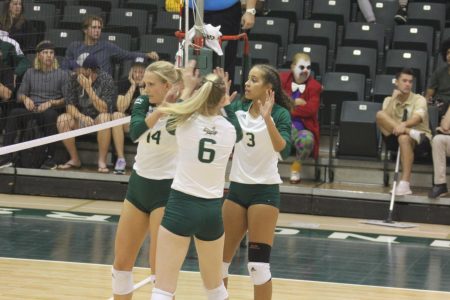 Ian EdwardsSac State sophomore Sarah Falk, freshman Kayla Subbert, and junior Macey Hayden come together on Thursday, Oct. 31, against Idaho at The Nest. The Hornets came back from a 2-0 deficit to win the match.

Andrews recorded 14 kills, seven blocks and a hitting percentage of .591. Junior outside hitter Macey Hayden had nine kills and 19 digs.

“SD (Davis) is just amazing, obviously,” Andrews said. “She really works hard and I try to work hard so I can get her some seams so she can hit. I really think she is a big part of our team.”