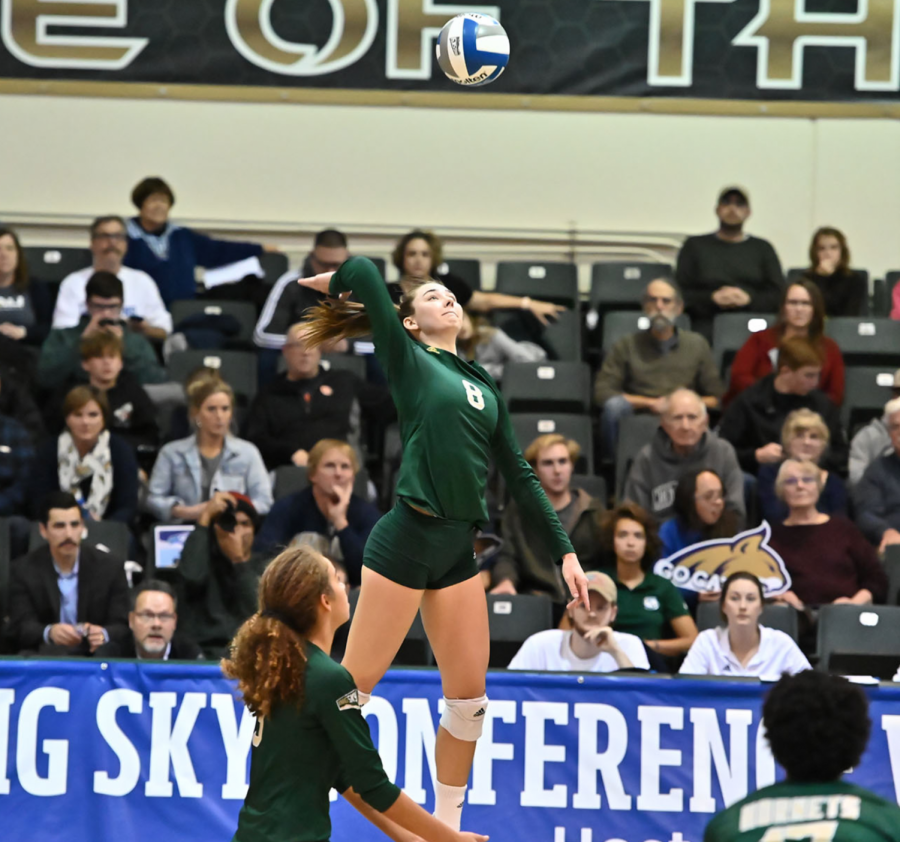 Sac State senior outside hitter Sarah Davis hits the ball against Montana State on Thursday, Nov. 28 at the Nest. The Hornets were eliminated in the quarterfinals of the Big Sky Tournament by the Bobcats.

The Sacramento State volleyball team was defeated in the first round of the Big Sky Championship Tournament by Montana State University Thursday night at The Nest.

“Last night’s game was not our best performance,” said senior outside hitter Sarah Davis via text. “It was a great opportunity to have a chance to play in The Nest one last time. I am grateful for this season and the growth we have made.”

Sac State and Montana State played in the final quarterfinal match of the night. The earlier matches saw Weber State University, Northern Arizona University and the University of Northern Colorado all advancing to the semifinals.

The Bobcats opened the first set with a 5-0 run to give themselves an early lead over the Hornets. Montana State was able to hang on to the lead to take down Sac State 25-20 in set one.

“Montana State came in and just played really well and played really hard,” said head coach Ruben Volta. “They’re really good defensively and I think that frustrated us. We didn’t pass well, we didn’t serve well and I think at times made the game much too easy for our opponents.”

Set two saw a more back-and-forth battle between the teams. Trailing 21-19, the Hornets went on a 4-0 scoring run to take a one point lead over the Bobcats.

Sac State’s offensive pressure put Montana State on their heels as the Bobcats used both of their timeouts in a matter of minutes to try and shake up the momentum. However, Sac State held on to take a 26-24 set two victory.

The opening point of set four went to Sac State, but that was the only lead they would see for the entire set.

The Bobcats controlled set four, limiting the Hornets to a negative .250 hitting percentage. Montana State’s 7-0 scoring run at the beginning of the set was all the momentum they needed.

The Bobcats won set four 25-8 to secure a match victory and eliminate the Hornets from the tournament. Montana State will face first-place Northern Colorado in the second semifinal match on Friday at The Nest.

“Last night was a rough way to end our season,” said sophomore setter Ashtin Olin via text. “We have a lot to work on for next year but I believe we can do it and pull through because we have a lot of strong physical and capable talent on our team.”

RELATED: ‘This is where I’m meant to be’: Sac State volleyball player sets team up for success

Montana State dominated Sac State from the service line with 15 aces. Sac State had zero aces and eight service errors for the match.

“They completely outserved us,” Volta said. “We passed terribly and when you do that it is really hard to win.”

Davis lead the team with 16 kills in her final match with the Hornets. She also posted 17 digs and four blocks.

Despite the disappointing end to the season, the team remained hopeful for the future of the coming years.

“Although we had a lot of lows this season, we had a lot of highs too,” Olin said. “We grew and learned a lot this season and we have lots to be proud of. We’re really gonna miss (Davis) next year. I love my team and I’m proud of them.”